The event was finally held on the road outside the campus gate. The empty hall at Delhi University, decorated with banner for the event. After the university administration refused permission for the event on the grounds that it had not been duly authorised, a truncated version was held on the streets outside the barricaded Arts Faculty. Credit: DYouth

New Delhi: The formal launch of a magazine produced by Delhi University students and an accompanying event  titled, ironically, ‘Dialogue on Freedom of Expression’ scheduled for Monday morning were cancelled by the DU administration in the wake of protests by the Akhil Bharatiya Vidyarthi Parishad, the student wing of the Rashtriya Swayamsevak Sangh.

The magazine, DYouth, was released subsequently by its editors and their invited panel of guests at an impromptu outdoor event where speakers condemned the manner in which the event had been scuttled.

The event’s organisers rejected the claim of the university administration that they had not formally got permission to hold the event. The hall was booked by the vice-president of Delhi University Students Union (DUSU), Kunal, they said. They also circulated photographs of the booking register with the relevant entry as well of the hall which had been decorated with a banner for the event – something which would not have been possible if they had not formally booked the hall, they said.

The magazine is the endeavour of an editorial board whose members say they have no affiliation to any of the student groups on campus. But they did manage to get the financial backing of DUSU, whose leadership is currently split between the National Students Union of India, which is affiliated to the Congress party, and the ABVP. 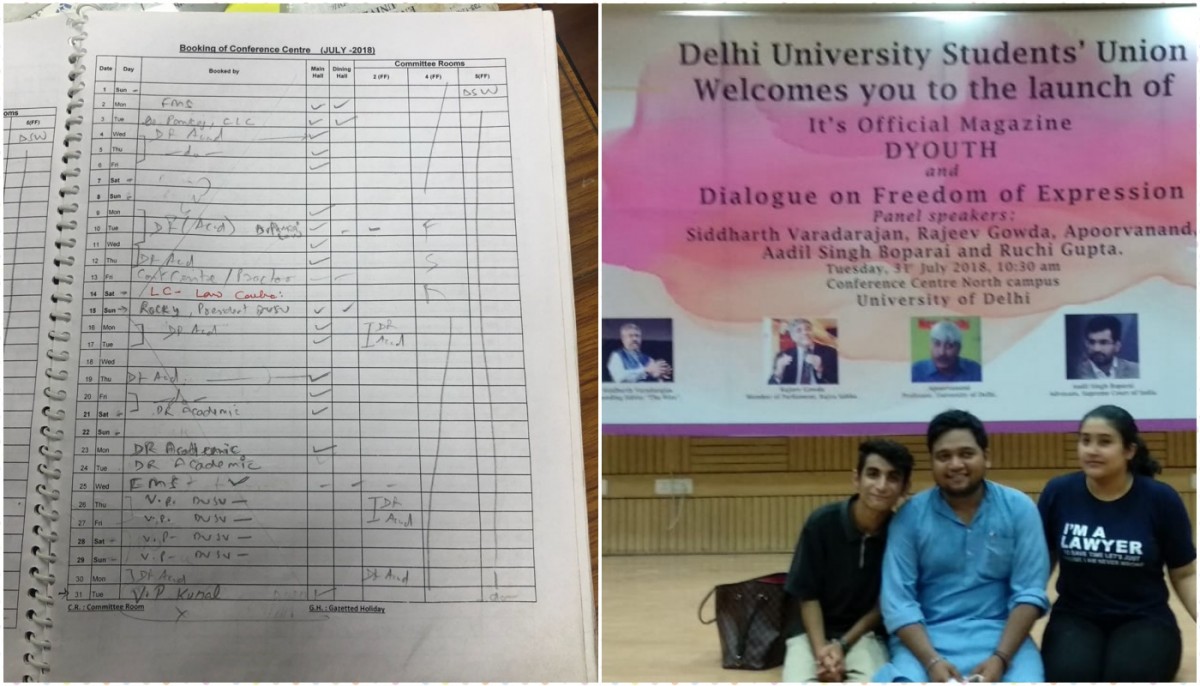 The register, where students say the hall booking was noted, and the stage decorated with a banner the previous night. Credit: DYouth

DYouth editors told The Wire that a group of students from the ABVP had objected to the event and the launch of the magazine. One of the objections they raised was the inclusion of a congratulatory letter from Rocky Tuseed, president of DUSU. Tuseed is from the NSUI and is currently locked in a legal battle over his status following a lower court setting aside his election. “We don’t know how anyone can object to his letter being there as he was the sitting president when the magazine was printed,” said one of the DYouth editors.

The magazine’s contents include articles by and interviews with a range of politicians and individuals — Subramanian Swamy, Jayant Sinha, Pinky Anand and Udit Raj are from the ruling establishment, Yashwant Sinha is a senior leader not currently affiliated with a party, and P. Chidambaram, Sheila Dikshit and Ruchi Gupta are from the Congress. There are others too, like Prashant Bhushan and Yogendra Yadav of the Swaraj Abhiyan. Besides these, student authors have written more than a dozen articles on a range of topics. “It is possible the ABVP is objecting to our cover story, which is titled ‘Promises Belied’, on the four years of the Modi government,” one of the magazine’s editors told The Wire. DYouth editors release their magazine on the road outside the Arts Faculty. Credit: DYouth

Against the backdrop of yellow barricades and dozens of police constables, the magazine was finally released on the road outside the Arts Faculty complex of the university. Two student groups – NSUI and the Communist Party of India (Marxist-Leninist) (Liberation)-affiliated All-India Students Association (AISA) – mobilised their supporters and a truncated version of the ‘Dialogue on Freedom of Expression’ also took place. Among those who spoke were Professor Apoorvanand, The Wire’s founding editor Siddharth Varadarajan, Congress MP Rajeev Gowda, NSUI leader Ruchi Gupta and AISA’s Kanwalpreet Kaur.

Apoorvanand said that cancellation of the event showed how India’s universities were not immune to the attacks that were happening on freedom of speech and expression across the country.