Creative Labour, the Private University and why the Attendance Fracas Is Not Just a 'JNU Issue'

Educational institutes adopting practices from the corporate and industrial worlds to measure accountability is a serious problem. It’s worth considering why our education system makes us feel and behave like criminals. 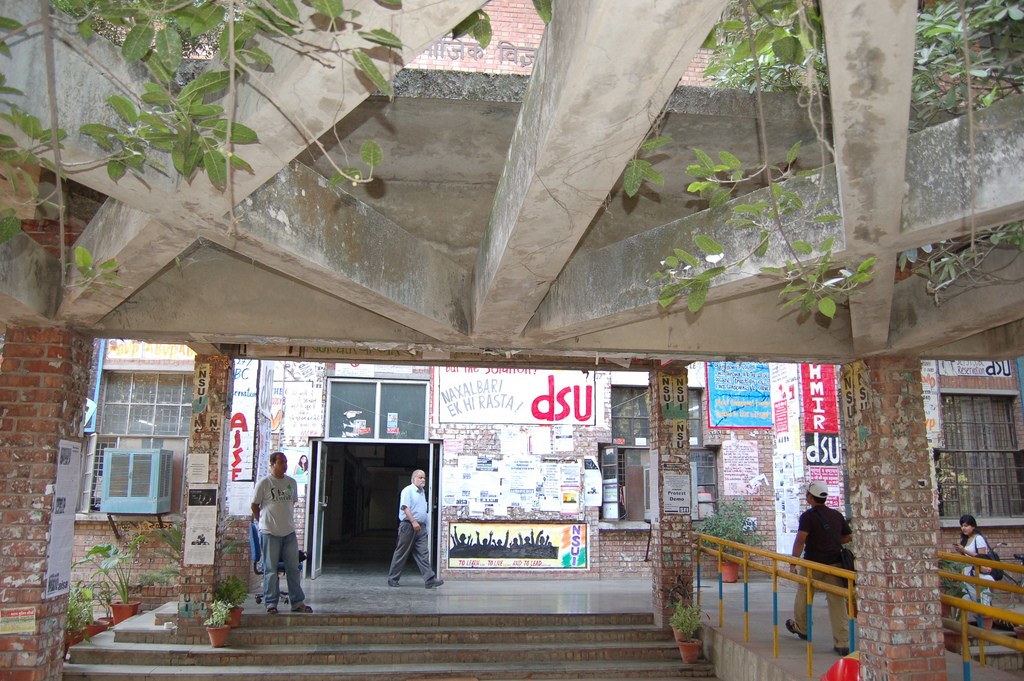 We can safely say, that we are now deep in the throes of a crisis of education, across the country. The crisis has been brewing for a long time, but our attention has been recently drawn to it by way of the new regulation mandating minimum 75% attendance for Jawaharlal Nehru University (JNU) students.

If this change comes about, JNU will join the majority of higher education institutions in enforcing disciplinary measures to monitor students’ whereabouts. The question of regulating attendance, however, merits a wider discussion, as it moulds our vision for education at large. The present crisis therefore is not just a ‘JNU issue’.

Over the last three decades, the educational landscape of India has transformed dramatically. Private institutions and universities have emerged in large numbers.

While not all of them deliver what they promise, it shouldn’t be overlooked that some among them are indeed attempting to construct pedagogies and curricula that are more relevant to our times. What really is fuelling this drive for innovation is a combination of dissatisfaction with traditional educational pedagogies, a desire to make learning more relevant, and the vulnerabilities of an unsubsidised industry trying to stay afloat, all of which are resulting in a radical restructuring of the traditional university into a new kind of organisational creature, influencing the very concept of education and what it stands for.

A central aspect of the reinvention of the conventional university is the growing and alarming culture of surveillance in private institutions. One of the primary aims of this surveillance is to assess faculty accountability, by notching up the total number of hours they work every day. Unfortunately, tabulation relies upon documented records of faculty’s physical presence on campus.

The rise of this culture of measuring intellectual labour through the limited prism of ‘in class’ or ‘on campus’ poses a great threat to the very sense of education as a sustained love affair with ideas, art, literature, practice, and discipline. It is symptomatic of the challenges we encounter in calibrating creative work (teaching and research in the arts and humanities involve a fair bit of creativity and imagination) that restrict ‘affective labour’ to time-bound slots.

Italian feminists like Mariarosa Della Costa and Silvia Federici used ‘affective’ in the 1970s as a defining category for unrecognised domestic labour, that produced emotional and sensory responses. The term since has got fresh attention in the more recent work of Michael Hardt (1999).

Ironically, the segregation of ‘work time’ from ‘leisure time’, is an utopia shared both by Marxists and capitalists. In Modern Times, a remarkable film about the governance of time and productivity, Charlie Chaplin’s body gradually loses its own rhythm to uncontrollably mimic the repetitive motion of industrial machines. Modern Times is a classical representation of the Marxist idea of work and labour, considered as being both demanding and punishing. However, creative and affective labour, pose different kinds of questions about work that one draws pleasure from.

There is a serious problem when educational institutes adopt practices from the corporate and industrial worlds in measuring accountability. The fundamental difference in the two kinds of works is that the work of an educationist is to persist in life-long inquiry into subjects, through teaching and research, one enriching the other. If one must find the closest common political economy to understand modern education, it could be classified as ‘immaterial labour’ in the way in which Maurizio Lazaratto (1996) uses the term in describing how value is produced from affective and cognitive labour. As an extension of Lazaratto’s ideas, one may argue that the enforced segregation between work and non-work in the context of affective labour unleashes violence upon workers, through commodification of creative work, and regulation of workers’ time through assembly-line industrial economies.

Although we take into account the transitions in economic and industrial practices across different historical periods, the educational landscape and the governance of educational institutions to us appear to be static and unresponsive to the wider climate. As a consequence of this self-inflicted blindness, we find ourselves in a great mess. Our public universities are being bulldozed by the state, while private educational institutions are being modelled upon best practices from Wall Street. The education industry in this country (and elsewhere), finds itself in as precarious a condition. They are expected to act as the stock market or an unsteady government, which must at all times learn to recalibrate and speculate ahead, anticipating the next big game changer.

There has been extensive debate everywhere in the world on corporatization of education. It is no secret that the arts and humanities were the first to be affected. The first job cuts took place in disciplines that cannot generate revenue, such as history, anthropology, philosophy, cultural studies and so on. It is clear that educational institutions need to find ways to sustain themselves unless funded by philanthropies or corporates with deep pockets.

Since private institutions are not required to follow the set University Grants Commission (UGC) curricula, they also have more flexibility in innovating courses. This means that these universities need to make themselves attractive to a potential student community, which will be willing to pay their significantly hefty fees. There is wide ranging evidence of private institutions setting up programmes that not only are distinctive, but bolstered by a sprinkling of good international faculty along with some heavy-weight academics from India. A cursory google search through the websites of the ‘top’ private institutions in India will substantiate this claim.

However, the flexibility of not being bound by the limited vision and pedagogy of the UGC also comes with the absence of governance regulations, other than the general law of the land. For example, each private institute is at liberty to devise it’s own regulations with respect to leave policies, pay scales, work contracts etc, just as they can devise their own curricula. Often, simple things like research time, is solely sanctioned at the discretion of the management or directors. The concept of a sabbatical, i.e. paid leave for research is almost non-existent, as institutions do not see faculty as resources that need investing over a long period of time.

As a consequence of this culture, and of recruiting ‘star academics’ in order to attract students, there often tends to be a lack of transparency in governance and policies. This breeds a culture of silence among faculty themselves, as people are often not willing to openly discuss pay scales and other privileges extended on an individual basis. For example, the website of one such esteemed university lists several deans, assistant and associate deans, and directors within a single faculty/school, a liberal smattering of accolades for a liberal arts college. This is a marked shift from the value that deanship carried as an administrative responsibility taken up on rotation basis, to being a decorative badge of honour, sometimes without any corresponding authority.

In the pursuit of technological smartness, new forms of monitoring and surveillance such as biometrics, are adopted. Rather than aspiring to make their mark felt through teaching and research, faculty are compelled to record their physical presence on campus via biometric machines. Some institutions do not even provide faculty with the basic infrastructure required to carry out research and writing on campus, which would include a well-equipped library, and proper office space.

In addition, the faculty are forced to travel simply to record their physical presence on campus even on days there are no teaching or other commitments. Ironic that in institutions that are supposed to impart an education, the accountability of educators is being measured by the angootha chaap (finger print), a mark of illiteracy.

It is not uncommon to hear of salary deduction because some faculty member forgot to leave her fingerprint as evidence of having ‘worked’ that day. Reasons of ‘safety’ are often cited to justify fingerprinting not just once but twice a day.

The administration even calls faculty members to ask about their whereabouts, demanding written explanations about why they were late, who they were meeting and so on. Daily emails seeking permission to do what teachers are meant to do – teach, write and participate in public events – need to be followed up with monthly summaries of day-to-day reporting in order to get paid full salary. These reports are read by administrators who have little or no understanding of the nature of academic and creative work. This is not only humiliating but also a way of infantalising academic faculty by reducing them to corporate or industrial slaves.

Moreover, most private institutions are not unionised, with no clear procedures in place for conducting reasonable negotiations between management, administrators and faculty. Customised time-based contracts for each individual preempt collective resistance. Those employed in private institutions usually find it much harder to express their grievances freely.

This corporatised work culture extends to students as well, who are treated as ‘clients,’ with no real rights! Attendance tops the list in measuring academic performance. In some institutions, disciplinary actions force students to drop modules if their attendance falls short. The administration is indifferent to whether a student is unwell, has been working independently, or doesn’t find a compulsory module interesting. Sometimes students master the art of getting proxy-attendance. It’s worth considering why our education system makes us feel and behave like criminals.

Since parents or guardians often pay the fees for their child’s or ward’s education, a direct contract seems to get established between the educational institute and the holder of the purse-strings, bypassing the student. Though 18 and 19 year-olds are eligible to vote, they are rarely considered capable of making an independent decision, and are seldom encouraged or given an opportunity to do so. Not even the freedom to decide whether they want to attend a class or not.

Most of us, at one time or another, have had the privilege of encountering teachers who have opened up new horizons, and whose vision and courage have remained a guiding force throughout life. Why then deny students the opportunity of taking responsibility for their own learning? As a society, why are we so terrified of letting young people make their own decisions? Is this not a failure of our education system at large (starting from school)?

Tragically, the managerial and administrative classes that regulate our universities, show little sensitivity towards the nature of academic work Especially not in educational institutions where a large part of learning and teaching takes place outside the classroom, and increasingly now, given that students are learning a lot more through Youtube and Google. The classical distinction between work and leisure cannot be applied to the ‘business’ of education, as teachers and students are engaged in a continuous intellectual labour going beyond ‘class time or work hours’.

Vikas Bandwala has been a student and a teacher in public and private universities in India and Europe.