Republican Values, Or Things That Students Need Not Learn

The CBSE's syllabus diktat seems to announce a clampdown on learning that may raise questions of macro-historical distress and discrimination that continue to plague the republic. Guernica, a painting by Pablo Picasso, is now a symbol of how powerful political forces determine the lives of citizens. Photo: Public domain

It is said that when Benjamin Franklin emerged from the concluding session of the Constitutional Convention, one Mrs. Powell asked him, “What have you given us?”

That claim, of course, stood glossed by the trenchant irony that, at that point in 1787, the American constitution framed in Independence Hall in Philadelphia did not include the right to vote for American women.

Only after heroic struggles by American suffragettes was that right realised in 1920.

Just as the formal right granted in 1870 to African-American men to vote was actually to fructify as late as 1965 when the Voting Rights Bill was passed.

Yet, some 230 years after the adoption of the American constitution, the United States under the Trump presidency can be seen to be embroiled in another historic battle to preserve the republic and all its democratic and institutional accomplishments.

The situation in India is not too different.

The Indian constitution granted the right to universal adult franchise from its very inception, transcending some stiff opposition from deeply conservative sections of the Constituent Assembly.

A pivotal aspect of that revolutionary accomplishment was the new emphasis on expanding literacy in order to lift the mass of Indians out of ignorance and render their exercise of franchise sentient and independent. Long decades of struggle were finally to culminate in the legislation by parliament on August 4, 2009, which made access to free school education a legally enforceable right.

Needless to say, that education about republican values and citizen’s struggles to realise them is transmitted to students in academic institutions through a study of social and political science curriculum, and, overall, through a study of the history of cultural oppressions and aspirations.

Those histories also teach us that when nation-states come to centralise economic and political power, the existence and sanctity of democratic institutions and imperatives notwithstanding, it is not the hard sciences that offer much resistance. Such resistance invariably comes from the social scientists and historians who insist on educating us about the non-negotiable status of republican goals and the required modes of governmental conduct thereof.

Also read: The Republic at 71: Faced With an Unbending Government, Indians Continue to Speak Out

Caveat: There was a time when the hard sciences became the chief instruments of progressive historical transformation (recall Copernicus and all those that followed in changing irretrievably our consciousness of material forces and phenomenon). But, as the new revolutionary classes settled down to profit accumulation, science needed to be reduced suitably to technologies that would no longer ask humanist questions but serve the interests of endowed classes.

Closed authority structures then develop a vested interest in keeping from citizens critical knowledge of social and political formations and of constitutional values that pertain to principles of republican democracy, even while they obtain executive legitimacy from democratic forms of government formation. The possibility of such a degradation of liberal archives of politics into authoritarianism was eloquently explored by Horkheimer and Adorno in their path-breaking Dialectic of Enlightenment.

Such authorities begin to clip the wings of the sources of progressive humanist knowledge by either cutting resources to the social sciences, or by taking recourse to sundry strong-arm methods available to the state. But, most of all, by reformulating schools curricula to the state’s ideological requirements. 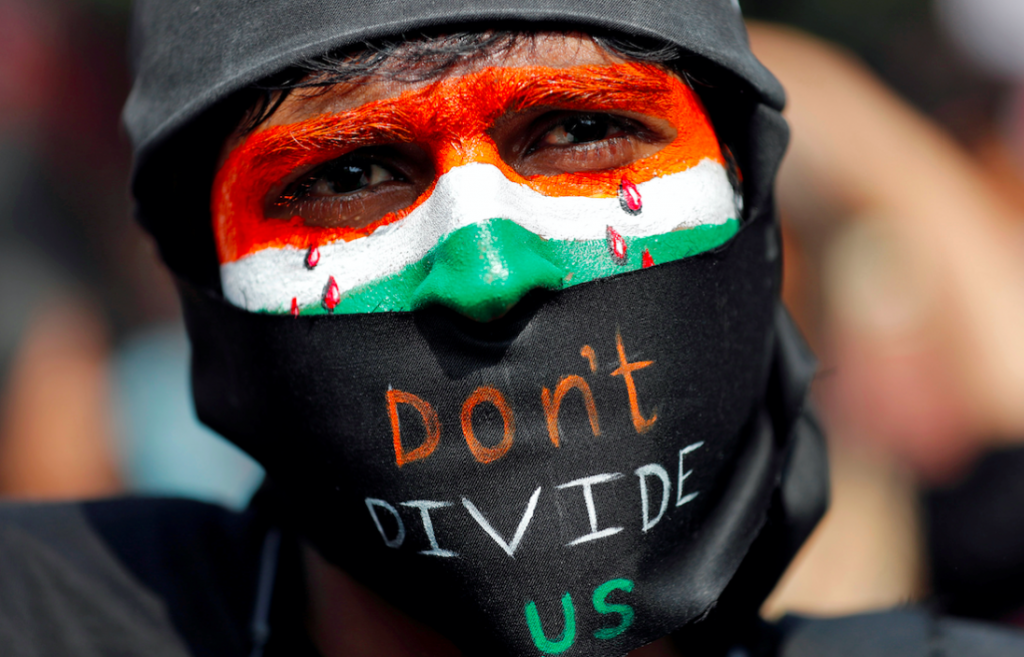 A demonstrator attends a protest against riots following clashes between people demonstrating for and against a new citizenship law in New Delhi, India, March 3, 2020. Photo: Reuters/Adnan Abidi

Within any educational system, it is a given that the content and quality of curricula suggest what authorities who frame those curricula think to be desirable or deleterious to the development of citizen’s cognitive allegiance to the ideological preferences of ruling social forces.

And, exclusions from the curricula are often far more indicative of the bent of those authorities than the inclusions.

In that context, the shredding of subjects inscribed in the Social Science, Political Science, and History text books of class 9, 10, and 11 of Indian schools just announced by the Central Board of School Education (CBSE) on directive from the Minister of Human Resource Development, no less, must be seen as a telling pointer to the priorities of the present central government.

Arguing that the “burden” on senior school students needs to be reduced, for the year 2020-2021 In view of the disruption caused by the COVID-19 calamity, it is proposed that subjects like, inter alia, ‘Democracy and Diversity,’ ‘Gender, Religion, Caste,’ ‘Popular Struggles and Movements’, ‘Challenges to Democracy’, ‘Citizenship’, Nationalism’, ‘Secularism’, ‘Federalism’, ‘Planning Commission and Five-Year Plans’, ‘Peasants, Zamindars, and the State’, ‘Understanding Partition’, and ‘Mathematical Reason’ be excluded from the existing curriculum for purposes of examinations.

In effect, all those materials that bear on the formation of republican citizenship, a republican constitution, and a critical understanding of how we came to be and who we are, and what our role as citizens of a republic is in upholding republican principles are to be ejected as matters of lesser consequence than the imbibing of supposedly ideologically neutral skills. The ejection of such materials, of course, reveals how frustrated authorities are with their critical and social import.

All this of course falls pat within the intellectual parameters of a nationalism that looks upon open liberal enquiry into state formations as anathema. In so far as such enquiry often brings into question the unanalysed or tendentious economic, cultural and historical predilections of closed authority structures, it is always the social sciences and truthful history writing that present the most obstacles to the closure of the governing arrangements of autocratic rule.

It should be clear from the above list of exclusions that the “bad” and the “ugly” must be jettisoned from study and deliberation; unsurprisingly, all of these exclusions impinge on the right of diverse oppressed segments of the citizenry to learn of both their sources of oppression and their republican rights and prerogatives.

Coming as this does in the wake of what we have seen of the plight of millions of trudging immigrants—an instructive episode that brought to the fore the continuing fault lines of caste, class, gender, and religious identity—the diktat seems to announce a clampdown on such learning and pedagogy that may raise questions of macro-historical distress and discrimination that continue to plague the republic.

Note that the honourable minster does not include such subjects in the “core” values of education or of “learning achievement.”

John Dewey, that doyen of educationists, once wrote that the true aim and purpose of education is education.