Student Protests Have Challenged the Ideological Stagnation of BHU

The university has for years remained plagued by conservative forces, gender inequality and the administration's callous attitude towards women’s safety. 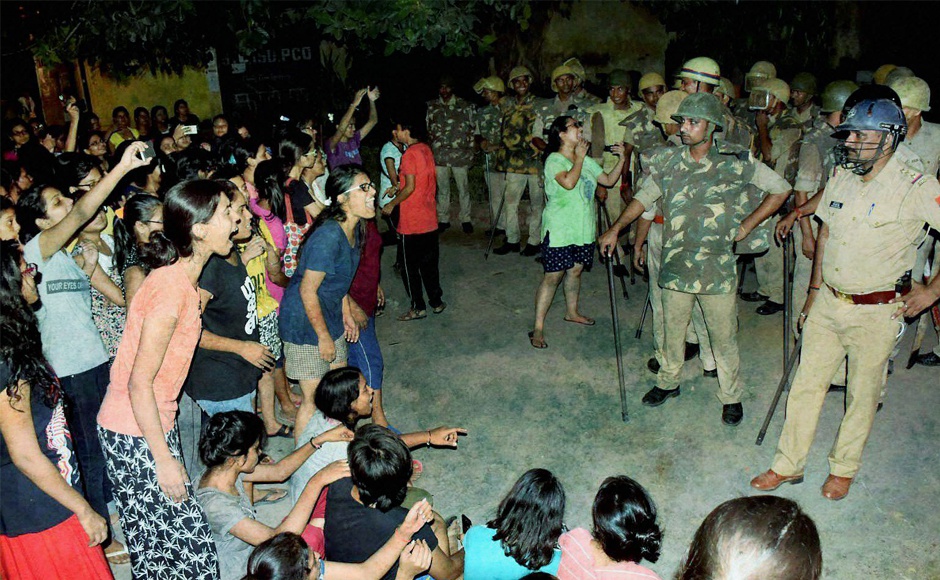 On September 21, a student was sexually assaulted while returning to her hostel from her department at around 6:20 pm near Bharat Kala Bhawan, a museum inside the Banaras Hindu University (BHU) campus. The offenders are still unidentified. The student approached the security personnel deployed nearby but received no assistance. Her friend helped her return to her hostel, where she fainted due to shock and trauma.

The next morning, the enraged students of the women’s hostel gathered at the main gate of BHU at Lanka to protest and demand adequate security for themselves. They protested peacefully for the next two days till the BHU administration along with the government decided to use police force to disperse the gathering without considering the students’ demands. The vice chancellor was intent on not listening to the demands and took whatever measures he wanted against the culprits and security personnel. Media coverage has already shed light on these events.

We need to stop and think about some pertinent aspects of this incident. Is this as simple an issue as it seems? Why was the university administration not willing to provide adequate security to its students? Why did the protesting students not receive any moral or physical support from their teachers, as they would at any other university? Were the students’ demands not feasible and justified?

The burden of tradition

This sexual assault case was not a random one. The students, both men and women, face many kinds of regressive and discriminatory practices in the university and these practices are justified in the name of tradition and ‘civilisational ethos’.

BHU is an island of inequalities – which is an irony given the idea of an university. It is one of the most undemocratic places anyone could ever step into. The issue of the generation gap between teachers and students is largely ignored. Rather than preparing students to become progressive, liberal, democratic citizens, teachers do not wish to accept the changes taking place in the modern world. Additionally, inefficiency and a lack of academic rigour are celebrated as practicalities for landing jobs.

The professors must be considered responsible for failing to present themselves as role models that shape young people for their future roles as democratic citizens.

The security personnel deployed on campus is also something of an incongruity. The ex-military and paramilitary personnel who have been disconnected from mainstream society for the larger part of their lives suddenly find themselves in a place where tradition is confronted by modernity. Because of their regimental training, they are not used to embracing changes. The environment at the university, which is very open by their standards, shocks them and challenges their deeply-held beliefs and values. They are often heard condemning young students as immoral and corrupt in reaction. 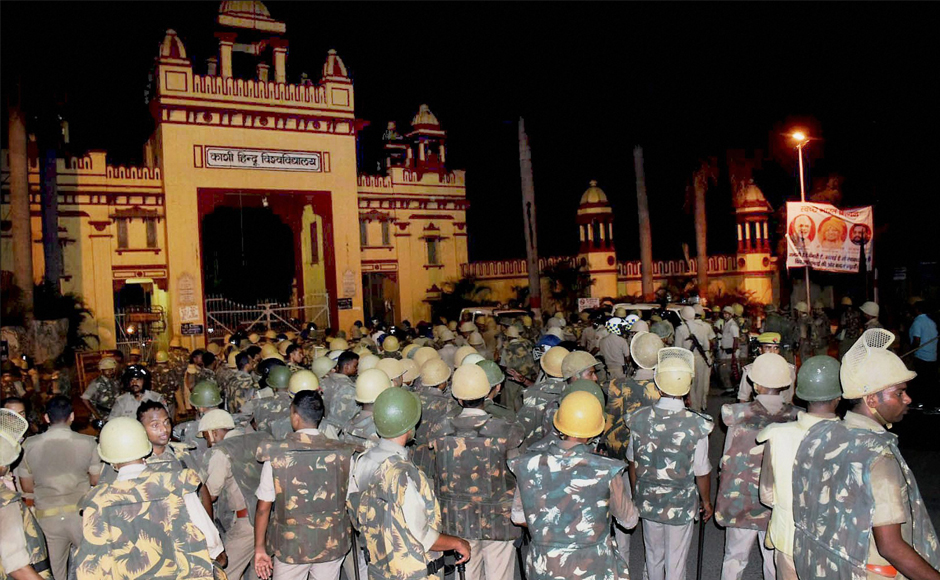 The police and paramilitary personnel deployed to control the protests at BHU. Credit: PTI

At the same time, many of the security personnel are contractual and underpaid. Therefore, in order to keep their jobs secure, they choose to collaborate with the feudalistic and patriarchal university administration. As a result, they act as stooges of the university administration rather than security personnel. The display of power and authority that derives from feudalistic aspirations is so celebrated and glorified on campus that many professors prefer the position of the chief proctor, celebrating it as an achievement and boasting about themselves as members of the university security personnel.

Also read: How Long Must BHU Wait Before It Finds Progressive Leadership and Liberal Thought?

Another important issue is the lack of women’s safety inside the university campus, which is the result of years of gender inequality. The incident of sexual assault that took place right in front of security personnel is the most recent manifestation of this long-standing inequality. The callous attitude of the administration towards non-rape offences like eve-teasing and stalking becomes frequently apparent on campus. The existing Women’s Grievance Cell is farcical in nature in the casual manner with which it approaches sexual harassment cases. Its continual neglect has intensified distress among women students.

It is clear that the responsible people at the helm have not been acting according to their defined roles and responsibilities. Going against the very meaning of a university, they are rigid in their behaviour and unaccepting of new ideas and changes. This is what leads to the communication gap between students, teachers and the administration and what often results in bitter confrontations between them.

The vice-chancellor has proven how harmful an inefficient leader can be. He has declared the university a ‘man-making centre’. What does he mean by that term? Is there a women-making centre as well? Can we understand by his idea of a university that a person who has not attended university is not a man but something else?

If I could address the vice chancellor in person, I would like to say this: Sorry, professor, you are utterly mistaken. A university is not a banking coaching centre. A university is not a man-making centre but an institution that transforms a young person with an unformed mind into a critically minded, democratic citizen. It would be futile to say anything about your academic credentials. But you are a monumental failure as an administrator as well. In the last three years, you have shown remarkable dedication and commitment towards a particular ideology but you are a total failure as a teacher and administrator. A university such as this that has been celebrating the centenary year of its foundation and has a great tradition of producing nation-builders deserves a much better vice chancellor than you. You have made this university bear the burden of an ideology that is divisive and problematic. You are an arrogant person and your arrogance comes from your ignorance.

The women students finally decided to protest – and what a protest it was. They successfully bound all students together and made a statement.

Nevertheless, a lack of political socialisation, political discourse and leadership was perceptible in their protest. Therefore, it turned into one merely against issues of safety and administration rather than the conservative forces of society. It had the potential to launch a discussion on gender and progressive and liberal ideas on an ideologically stagnant campus. But the women were, in fact, heard discussing that they should not politicise the issue and refrain from any ideological leaning.

What they did not realise was that the moment they decided to stage a peaceful protest they transformed themselves into political entities. It would have been in the greater interest of the university to lead a struggle with political motivation.

The students’ protest has nonetheless broken the political and ideological stagnation of BHU. This is a good sign for the health of the university and the future of society. We can hope that the protest will improve the situation at the administrative and teaching level. If this happens, we must thank the women students of the university.