Backgrounder: Behind the Recent Events at NIT Srinagar

Triggered by a cricket match, the controversy at NIT Srinagar has escalated after alleged police brutality against students. 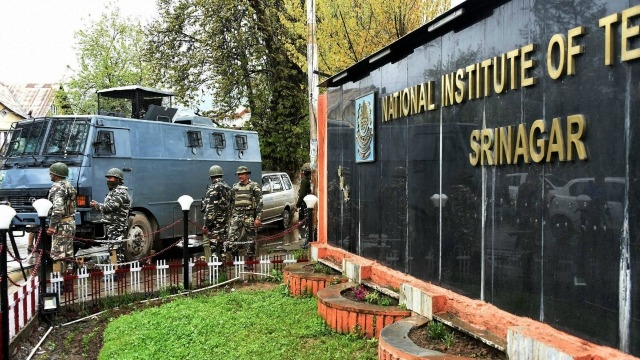 The National Institute of Technology, Srinagar has been the latest in a line of educational institutions in the news for campus unrest recently. Like in other cases, that of Hyderabad Central University for instance, alleged police brutality on students has brought the issue to the forefront.

NIT Srinagar gets a large number of students from across the country; a big majority of them are not from the Kashmir valley but from Jammu and other parts of the country. The faculty, on the other hand, is mostly local, though there are also teachers from elsewhere in India.

The recent controversy began on campus on March 31, when India lost the semi-finals to West Indies in the T20 cricket world cup. According to reports, some Kashmiri students celebrated India’s loss and burst firecrackers, upsetting students from other parts of the country. A clash then broke out between two groups of students, in which some were injured. There were also allegations of two Kashmiri day-scholar students and a delivery boy being beaten up by the non-local students for not chanting ‘Bharat mata ki jai’, though these allegations have been repeatedly denied by the non-locals.

Some Kashmiri students have also alleged that the problem started earlier, when Pakistan failed to make it to the final stages of the competition. According to them, other students taunted the Kashmiris on Pakistan’s loss.

On April 1, tensions were still high on campus. Hundreds of non-local students gathered in a protest, chanting slogans of ‘Bharat mata ki jai’, ‘Hindustan zindabad’ and ‘Pakistan murdabad’, waving the national flag and trying to hoist it at the university’s administrative block; Kashmiri students responded with ‘hum kya chahte azadi’ (we want freedom). The administration suspended classes for a few days, until the situation “calmed down”.

Classes were meant to officially resume on April 4, but non-local students boycotted them. There was heavy police and CRPF presence on campus. On April 5 evening, a group of engineering students took out a protest march. According to the police, the students tried to leave the campus premises, which they saw as dangerous. They have also referred to a video of students pelting stones at a car. However, students have said it was the police who started the violence, seizing the flag they were carrying and beating up students. A video of a group of policemen attacking a single student with lathis has also been released, and students have alleged that police barged into their hostel rooms and hit them.

Non-local students have reported that they do not feel safe on their campus, especially after the police brutality. They have also alleged threats from their Kashmiri counterparts as well as faculty members, including female students saying that they have been threatened by some of the Kashmiri students with rape. Other non-local students have said they are afraid to speak out openly, fearing persecution from the administration and faculty.

One group of female students has also released a video asking that this not be made into a communal or political issue, and that their struggle is not against the locals. They are fighting against the college administration and police action on campus, the girls in the video say.

A group of officials from the ministry of human resource development visited the NIT campus, and protesting students put forth their demands. They want to be moved to other NITs in the country, the Srinagar NIT moved (preferably to Jammu), and action on both the alleged police brutality and administration and faculty members who are said to have threatened students. Reports even have non-local students saying that “This is not India.”

On April 7, the NIT administration issued a circular saying that students could leave the campus and return home if they wanted to. Since it is now exam period, those choosing to leave will be allowed to give their exams later, it said.

Meanwhile, protesting students continued their strike and hoisted the national flag on campus with help from the CRPF.

Student organisations from across the country, including AISA and ABVP, have condemned the alleged police brutality on the NIT campus. Speaking to The Wire, JNU students’ union general secretary Rama Naga said that universities across the country have been turned into “cantonments”. “This is what we need to come together on,” he said. “Students are not being allowed to speak their minds, like it happened in JNU and HCU. This entire issue started because of a cricket match, and it has been blown out of proportion because of the way it has been handled, including all the CRPF and police presence. A campus should be allowed to remain a campus.”