In a letter to students, Mehta has urged them not to 'press on the matter' as the 'underlying circumstances that led to the resignation will not change for the foreseeable future, in my case, at any rate'.

New Delhi: As students, faculty members and scholars from around their world express their displeasure at recent events at Ashoka University, the chancellor, vice-chancellor, chairman of the board of trustees and the two renowned professors who quit – Pratap Bhanu Mehta and Arvind Subramanian – have issued a joint statement.

The two former professors’ resignation letters made clear that their decisions were determined by conversations with university founders rather than personal choices. In the joint statement, Ashoka University has admitted to “some lapses in institutional processes which we will work to rectify in consultation with all stakeholders”, and also sung praises of the two professors who have left.

The members of the administration have also said that they “reaffirm our commitment to academic autonomy and freedom which have always been at the core of the Ashoka University ideals”.

“Pratap and Arvind would like to emphasize that Ashoka University is one of the most important projects in Indian higher education. They are sad to be leaving Ashoka, especially its outstanding students and faculty. They continue to believe strongly that Ashoka University should embody a liberal vision and commitment to academic freedom and autonomy. And they remain lifelong friends and well-wishers of the institution and are committed to its success wherever they are,” the joint statement by parties believed to be at odds with each other reads. 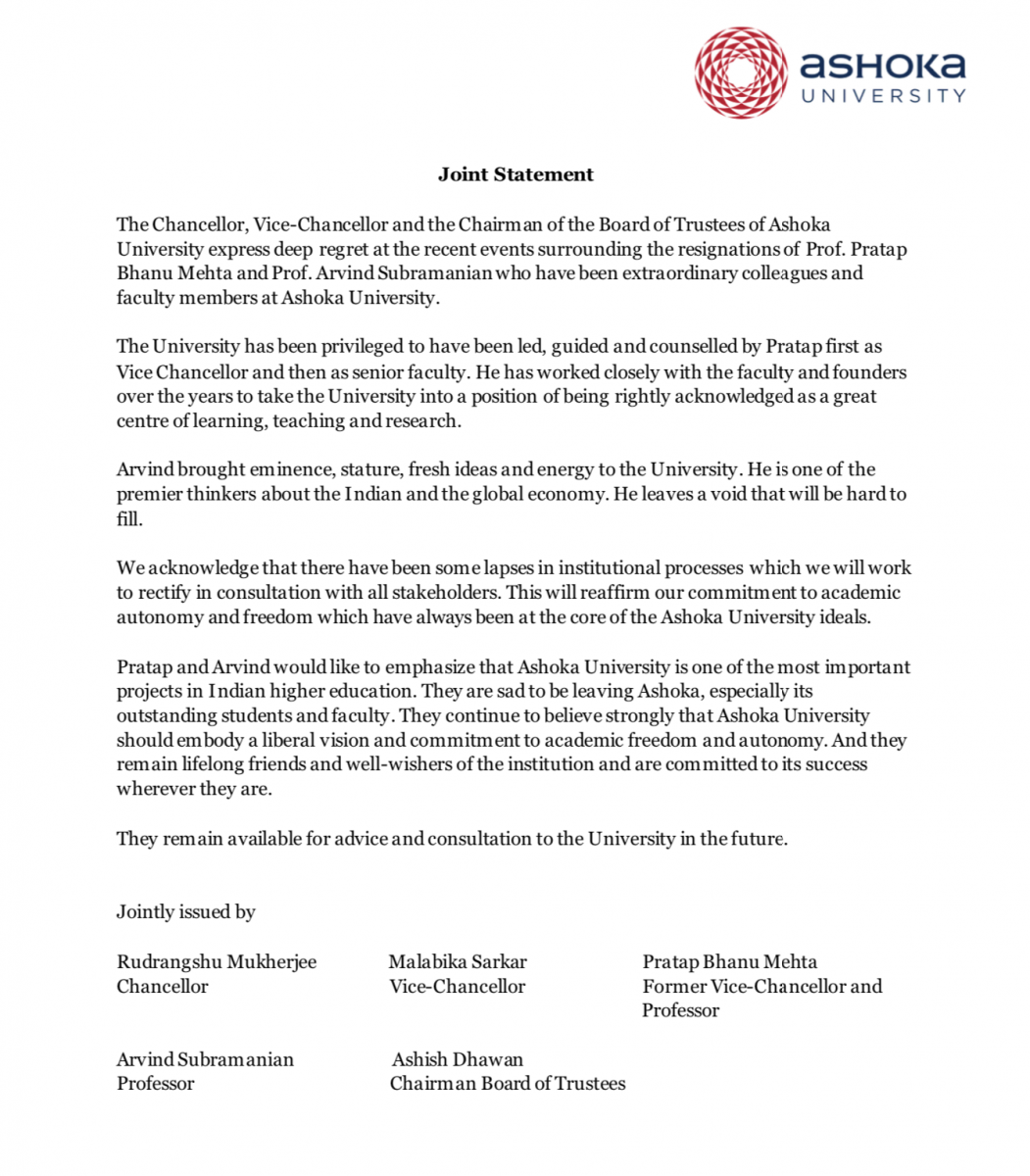 A letter Mehta has written to students at Ashoka clarifies matters slightly. He thanks them for their solidarity, and says, “Your “rebellion” was grounded in a concern for freedom and democracy. You carried it out with dignity, grace and I might add, based on memes some of you shared, some serious artistic creativity.”

In his letter to the students, Mehta urges them “not to press on this matter”, suggesting that he has decided to move on and does not see the reasons behind his resignation going away. “The underlying circumstances that led to the resignation will not change for the foreseeable future, in my case, at any rate. So I must close this chapter. …giving up the company of Ashoka students and colleagues, disrupting our lives, and leaving a fine university, is not an easy decision. But it is, for me, the only honourable thing to do, consistent with my values; values I think you share. I also believe it is in the best interests of the university.”

“I know you will be disappointed,” he continues. “But if I may exercise one last bit of professorial discretion: your mission is larger than the fate of two Professors.”

“We live in complicated times. India is bursting with creativity. But the dark shadows of authoritarianism are also hovering over us, putting us all in often uncomfortable and sometimes dishonourable positions. We will have to find principled and intelligent ways of overcoming this condition,” Mehta’s letter says. “Most of us are reduced to lamenting this looming darkness. I leave Ashoka with the conviction that a young generation is emerging that will provide what Vivekananda said we needed. We don’t simply need people who cry darkness. We need someone who can shine the light. I am confident, all of you can and will.”

Chancellor Rudrangshu Mukherjee has also written a letter to the students, faculty members, alumni, founders and trustees. His letter focuses on a “recovery” from the current situation, and also says that Ashoka University focuses on “critical thinking” and “intellectual autonomy”.

“Ashoka University’s commitment to core values and our Founders and Trustees’ role are being questioned in the wake of the recent resignation of Professor Pratap Bhanu Mehta. I want to respond to this. First, Pratap is a close personal friend and someone who I immensely respect. I was involved in bringing him to Ashoka, and he succeeded me as Vice-Chancellor. He has made invaluable contributions to building Ashoka into the institution it is today. We all regret what has happened, but I am sure we will recover and move forward from the situation we find ourselves in,” Mukherjee says.

He has also supported the founders against claims that they were responsible for the resignations, though Mehta’s resignation letter made it clear that it was a meeting with two founders that led to this decision. “Today when the Founders are being attacked for trying to compromise and curtail academic autonomy and freedom of expression, I find it necessary as Chancellor, and given my association with Ashoka from its inception, to state unambiguously that the Founders have never interfered with academic freedom: faculty members have been left free to construct their own courses, follow their own methods of teaching and their own methods of assessment. They have also been left free to carry out their own research and publications,” Mukherjee has said.

Letter From the Chancellor, Professor Rudrangshu Mukherjee by The Wire on Scribd


It remains to be seen whether the administrations efforts at “reaffirming commitments” will convince Ashoka University’s students and faculty members, who have openly expressed their dissent over the last week.