The Centre ups the ante by linking the targets of the recent police crackdown in JNU to the notorious Pakistan-based Hafiz Saeed but students, teachers and the opposition are not buying this line. 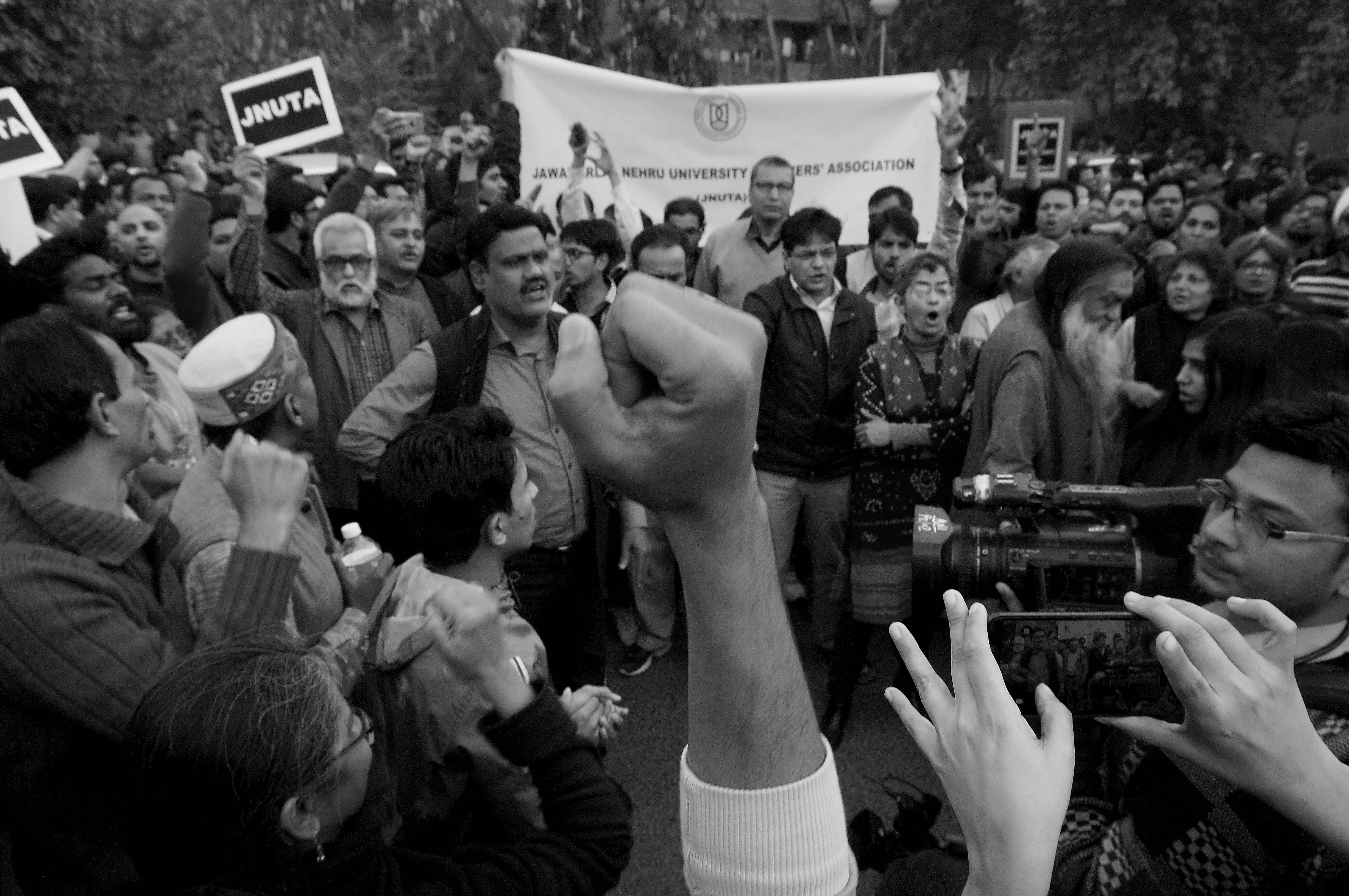 New Delhi: Turmoil continues at the JNU campus, unleashed by the university administration’s decision to give the police unrestricted access to the campus and the subsequent arrest of JNU Students’ Union (JNUSU) president Kanhaiya Kumar on the contested charges of sedition.

As the protests demanding Kumar’s release gain momentum, JNUSU has called for a university strike on Monday, February 15.

Kumar was arrested on charges of sedition, the legal basis of which is untenable according to experts. He has been in police custody for three days now and will be presented at the Patiala court on Monday. The JNUSU and the Teachers Association have both pointed out that Kumar was not an organiser of the meeting held to protest against Afzal Guru’s hanging, and explicitly opposed the positions taken and slogans shouted at that meeting.

The Delhi government, meanwhile, has ordered a judicial probe into the authenticity of the video evidence used to charge Kumar.

Union Home Minister Rajnath Singh said on Sunday that the JNU agitation was backed by Laskar-e-Tayyaba founder Hafiz Saeed. It appears that this accusation was based on a tweet from a fake Twitter account and no other evidence has been provided. There are rumours that the case may be handed over to the National Intelligence Agency (NIA) as it now involves “terrorism”, but this has been denied by the Delhi police.

On Saturday, seven others were allegedly detained, questioned and let go in relation to this case. Four of those questioned were members of cultural group Sangwadi, who were out to perform at the Urdu festival Jashn-e-Rekhta. They were picked up for “looking like JNU students”, because they had jholas and beards.

Teachers and organisations speak out

The JNU Teachers’ Association (JNUTA) held a press conference on Sunday afternoon to reassert their support for Kumar and other students, and demanded that the unrestricted campus access granted to the police be revoked. Citing the Supreme Court judgment in the Kedar Nath Singh case, JNUTA general secretary Bikramaditya Choudhary stated that this was not a case of sedition. “If you think you can put Kanhaiya behind bars and mute dissent on campus, you are wrong,” JNUTA president Ajay Patnaik said. “Unequivocally condemning the malicious slander” of the institution, Choudhary and Patnaik asked that the demonising of JNU stop. Several other teachers’ groups from across the country extended their support to JNUTA, including the Joint Action Committee for Social Justice from the University of Hyderabad, the Ambedkar University Delhi Faculty Association (AUDFA) and the Federations of Central Universities’ Teachers’ Association (FEDCUTA).

“This kind of police action on the pretext of national security and branding any kind of dissent as anti-national is a dangerous and undemocratic practice – a feature that was witnessed by University of Hyderabad recently and now JNU. Universities are necessarily sites of dialogue, debate, dissent and emergent ideas and philosophies—an ethos deeply enshrined in our Constitution. Having police on campus and creating an atmosphere of fear among students and other members of a University community is in violation to the spirit of the Constitution and undermines critical thinking within our Universities”, say the AUDFA statement read out by Rukmini Sen.

Nandita Narain, speaking on behalf of the Delhi University Teachers’ Association and FEDCUTA, said that this incident was part of a larger scheme to crush public institutions in India, and privatise the higher education system.

“We in no uncertain terms register our strong protest against the highly derogatory observations made by senior Haryana Government functionary Jawahar Yadav, close associate of the Chief Minister and former OSD and current chairperson of Haryana Housing Board, against women students of JNU who are involved in political protests.We also strongly condemn the arrest of Kanhaiya Kumar the elected President of the Students Union of JNU on charges of sedition on the basis of videos whose authenticity is a matter for the judicial probe ordered by the Delhi Government to establish. Kanhaiya Kumar had nothing to do with the organisation of the event in question”.

Yadav had earlier tweeted that women protestors were worse than prostitutes.

Both Saturday and Sunday saw massive gatherings on the JNU campus, in support of the students and teachers demanding the release of Kumar, the withdrawal of the police from campus and ending the “witch hunt” against students.

In a public meeting on Saturday evening, political figures, activists and professors, including Sitaram Yechury, Rahul Gandhi, Yogendra Yadav, Anand Sharma, Anand Kumar, D. Raja, Ajay Maken and Kavita Krishnan, addressed the audience of around 2,000 students and teachers. The administration did not allow microphones at the event, but it continued nonetheless.

“They are so scared of JNU voices that turn off mikes. They don’t know that we don’t need mics,” Krishnan said. Gandhi spoke about the importance of respecting freedom of speech and differences in opinions, saying, “Our voice is the most important thing we have.” He welcomed the ABVP protestors at the event, recognising their right to dissent.

Yechury also expressed his solidarity with the JNU community: “I, and most of India, cannot believe that students and teachers in JNU are anti-national…A university stands for tolerance. If all is well in the universities, all is well for the country.”

Protestors from the ABVP, the student wing of the BJP, were on the edges of the crowd almost throughout, chanting slogans and waving black flags. When Gandhi and Sharma tried to leave the event, ABVP members stopped their cars and allegedly roughed up Sharma. He has since filed an FIR against unknown persons.

Sunday saw an even larger gathering of students, teachers, alumni and supporters on the campus, with over 3,000 people forming a human chain.

Professor Ali Javed of Delhi University was taken in for questioning on both Friday and Saturday at the Parliament Street police station, and kept for long hours on both days. He had booked the venue for the event as a member of the club, but has categorically stated that he did not agree with the sloganeering that took place, and asked the organiser, Professor SAR Geelani, to put a stop to it. He has also been expelled from the Press Club, whose authorities filed a complaint with the police. A group of other members questioned the decision to expel him, expressing their doubts on the haste and lack of due process in a letter to the club’s secretary general. The have asked the club management to reconsider, and revoke Javed’s expulsion.

Colleagues from DU have been gathering outside the police station in solidarity with Javed. DU professor and RJD spokesperson Manoj Jha expressed his disagreement with the government and police. “These are the first people who condemned the sloganeering, yet they are the ones who have been called. The government is trying to camouflage the n number of real issues that exist. This is the same thing that is happening with JNU and Kanhaiya Kumar. You are saying that those who don’t agree with you are anti-national”.

Both he and Professor Nirmalangshu Mukherjee (a speaker at the event) have been called for questioning again on Monday morning.