Most students whose education was directly impacted by the shutdown following the August 5 move will 'learn' of it from the newly revised books. 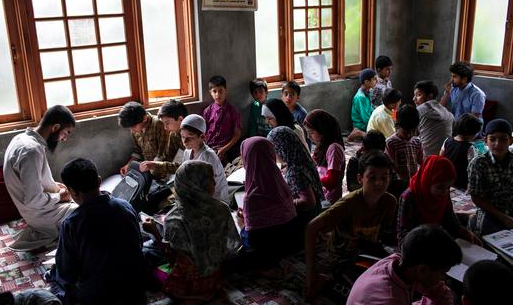 Srinagar: Government and private school students in Jammu and Kashmir will now ‘learn‘ about the reading down of Article 370 and the ‘reorganisation’ of the erstwhile state into two Union Territories in the newly revised textbooks published by J&K Board of School Education (JKBOSE).

The revised textbooks of classes VI to X have been made available by JKBOSE for students in all districts of Kashmir, Jammu and Ladakh divisions.

The revised Political Science textbook of Class X accessed by The Wire has a separate, detailed chapter titled ‘The Jammu and Kashmir Reorganisation Act 2019’.

“On the basis of a resolution passed in both the houses of the Parliament, the President issued an order on 6th of August declaring that all the clauses of Article 370 except clause (1) to be inoperative thus effectively ending special rights and privileges upon the J&K permanent residents, to the exclusion of other citizens of India, more specifically with regard to the acquisition of immovable property and appointments to services,” the introduction of the chapter states.

The chapter also points out that by virtue of the Reorganisation Act, “Parliament of India placed J&K State under the direct control of supervision of Central government  after splitting it into two Union Territories: the Union Territory of Jammu and Kashmir and the Union territory of Ladakh.”

In the “background history” section, the chapter states that the J&K Reorganisation Act of 2019, which came into effect on October 31, 2019, “thereupon superseded the constitution (applicable to J&K) Order, 1954 as amended from time to time,”

However, the chapter doesn’t inform the students about the subsequent lockdown and unprecedented communications and internet shutdown imposed in the valley from August 5 last year.

The chapter is also silent on the mass detentions of political leaders, detentions of hundreds of local youth and civil society members who were shifted to jails outside the state. There’s no mention of the continued detention of three former chief ministers of the erstwhile state who were recently booked under the Public Safety Act (PSA).

Interestingly, in the newly revised History book of Class X, a chapter titled ‘Post Independence Era: Jammu and Kashmir on the Path of Modernisation’ highlights the economic and social changes that occurred in Jammu and Kashmir between 1947 to 1963.

The chapter further shows, “how the development programs that were initiated under Sheikh Mohammad Abdullah were given a more practical shape when Bakshi Ghulam Mohammad took over the charge of the governance as the second Prime Minister (the term used for the head of the state till 1965) of Jammu and Kashmir.”

The chapter also notes a “paradigm shift” in Sheikh Abdullah’s political thinking toward the end of his rule.

“In the later years of his rule, many of his speeches asserting self-determination for Jammu and Kashmir and his ties with some western Diplomats created apprehensions within the Indian government,” the section headed ‘End of Dogra Rule and the Establishment of New Government’ points out.

“As such the Government of India started losing faith in Sheikh Mohammad Abdullah and as a result he was arrested in 1953 and imprisoned for a period of eleven years. Thereafter, his Deputy Bakshi Ghulam Muhammad became the next Prime Minister in 1953 which,” the section emphasises, “heralded the dawn of a new era in the history of Kashmir.”

Sheikh Abdullah’s son Farooq Abdullah and his grandson Omar Abdullah, both former chief ministers of the state, have been in captivity since August 5 last year.

The father and son duo have since been booked under the highly contentious Public Safety Act (PSA) which was in fact also used by the Abdullahs to crush dissent and imprison youth and protesters when they were in power.