An event where students chanted slogans against Afzal Guru’s hanging has quickly escalated into a political controversy beyond the campus, with the students’ union president being arrested for sedition. 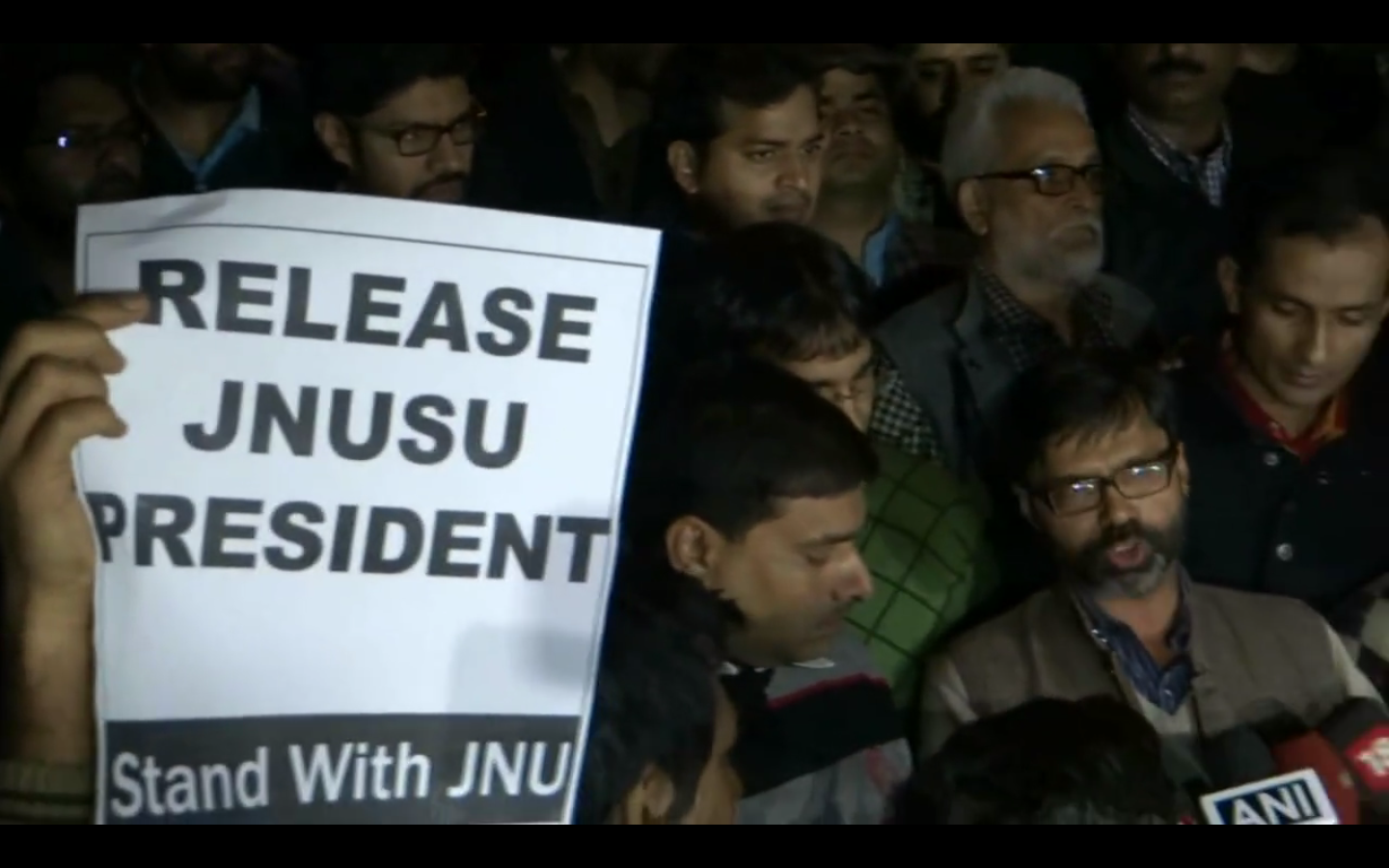 Representatives of the JNU Teachers Association speaking in solidarity with the arrested student at a meeting on campus. Credit: Special Arrangement

New Delhi: JNU Students Union (JNUSU) president Kanhaiya Kumar was arrested from the university campus on Friday after the police, acting on a complaint filed by a BJP MP, decided to pin responsibility for the chanting of slogans favouring Kashmir’s independence at a recent campus event on him. Facing charges of sedition and criminal conspiracy under the IPC, Kumar will be kept in police custody for three days. Eight students in all have been barred by the university administration from academic activities.

Kumar is a member of the All India Students Federation, the student wing of the Communist Party of India and one of the oldest students’ organisations in the country.

The chain of events leading up to the sensational arrest began on February 9, when a group of 10 students formerly associated with the radical Democratic Students Union organised a poetry reading and protest around the Kashmir issue to mark the anniversary of the hanging of Afzal Guru, executed in 2012 for his role in the 2001 terrorist attack on parliament. At the meeting, a section of the crowd shouted slogs in favour of an independent Kashmir.

Held on JNU’s Sabarmati lawns, the organisers had been given permission for the event. However, on learning of the exact nature of the event and what was to be discussed, this permission was withdrawn and JNU security was sent to disperse the gathered students.

In the meantime, students of the Akhil Bharati Vidyarthi Parishad (ABVP), the student wing of the BJP, gathered near the venue to protest against its “anti-national” nature. Hearing about this, other students including left groups like the AISF, the All India Students’ Association and the Students’ Federation of India came out in support of the organisers and their right to hold an event. Police were called to the campus to restore order when these groups clashed.

In a statement issued on Friday, the JNU Students’ Union said that the student leaders and left organisations were not in agreement with some of the “regressive slogans” raised at the event, and had asked the organisers of the programme to stop people from raising those. However, they felt that the cancellation of the programme was also unfair and showed the administration was “acting under ABVP’s pressure to silence any kind of differing view point.”

The JNUSU statement, which was issued in the name of Kanhaiya Kumar and two other office bearers of the union, also questioned the role of the police at the event, saying: “The administration called in the police, but, surprisingly, the police did not act when ABVP members went into physical confrontation with the students, misbehaved with women and beat up students. ABVP called DU students to the JNU campus to help in beating up students, while the police, whose duty was to prevent violence, watched silently”. The statement condemned both the “divisive sloganeering” and the “attempt to produce communal divisions”.

On February 11, the police filed charges of sedition and criminal conspiracy against “unknown persons”. This was after BJP MP from East Delhi, Maheish Girri, gave police commissioner B.S. Bassi, home minister Rajnath Singh and human resource development minister Smriti Irani a written complaint on the “anti-constitutional and anti-national elements” in JNU, seeking their intervention. Video footage of the original event (taken by private sources) was examined by the police as a part of the investigation.

On Friday, the Union home minister, Rajnath Singh, also said he had ordered the police to take “strong action” against the “anti-India elements.”

Whatever has happened in JNU is extremely unfortunate. I have instructed Delhi CP to take strong action against the anti-India elements

How the police settled on Kumar is not clear. In a video recording of Kumar addressing students soon after the controversial programme was stopped, the JNUSU president can clearly be heard condemning those who raised divisive slogans. The bulk of the speech is a blistering attack on the BJP and RSS, with Kumar accusing the Hindutva forces of being “anti-national”.

The JNU administration also announced that a three-member proctorial committee would be looking into these events, with two weeks to submit their report. The committee comprises Rakesh Bhatnagar, Himadri Bohidar and Suman Kumar Dhar.

On Friday, Kanhaiya and other students were picked up by plainclothes policemen from inside the JNU campus. While the others were taken for interrogation, sedition charges were slapped against Kanhaiya and he was arrested. Later in the evening, JNU issued a press release stating that 8 students have been debarred from academic activities during the period of the enquiry, based on the enquiry committee’s recommendations.

The university administration also gave the police freedom to operate within the campus “as and when they deem fit”, thereby giving up the immunity that universities have from police entry without invitation. This was used by the police to raid the hostel rooms of students they were suspicious of. The deans of four schools including Social Sciences, Languages, International Studies and Arts and Aesthetics have sent a letter to the VC asking him to retract this blanket permission immediately.

On February 10, another event to mark the anniversary of Afzal Guru’s hanging was organised in the Press Club by SAR Geelani, a Delhi University lecturer. The speakers included DU professor Nirmalangshu Mukherjee, Vijay Singh and Tripta Wahi. When a section of the audience raised controversial political slogans at this event as well, Professor Ali Javed, who had booked the location for the organisers, expressed his concern to Geelani before leaving for a radio recording. Delhi University Professor Ali Javed, member of the Press Club who had booked the premises for an event where a section of the audience raised controversial slogans, at Parliament Street Police Station in New Delhi on Friday. Credit: PTI

Ali Javed was also picked up for questioning by the police on Friday. In a letter addressed to the president of the club, Javed has apologised for the sloganeering which took place and said that such a lapse would not occur in the future. He said he booked the room on the understanding that the meeting would focus on the justice system in India. The political sloganeering which took place was “totally wrong”.

The JNU Teachers’ Association has issued a strong statement about the police action on campus, calling it “totally uncalled for”, and expressing “deep anguish over the university administration’s decision to give a carte blanche to the police” and “strong opposition to attempts to use the law and the police to suppress democratic dissent and conduct a witch-hunt on our campus”. They also organised a march within the university premises that was attended by a large number of teachers and students.

On their part, several senior BJP leaders including Rajnath Singh, Smriti Irani and Shrikant Sharma have welcomed the arrest and asked for action against others involved. The ABVP organised a march to India Gate, demanding action against the “anti-national elements” in JNU. The police action has been strongly criticised by opposition parties. Rahul Gandhi has accused the Modi government and ABVP of bullying JNU just because the institution “won’t toe their line”. The CPI(M) politburo in a statement compared the police activity and arrest on campus to the Emergency. Delhi chief minister and Aam Aadmi Party leader Arvind Kejriwal also came out in favour of the arrested student leader, saying the “targeting of innocent students” would prove costly to the government.

No one supports anti-national forces. But targetting innocent students using that as an excuse will prove v costly to Modi govt

A group of former JNU deans also saw shades of the Emergency in the arrest of the JNUSU president. “As [Kanhaiya] belongs to the All India Students’ Federation, his views and political associations are well-known, and to accuse him of sedition is beyond the bounds of credibility. The only previous occasion when the president of JNUSU had been arrested was during the Emergency of 1975-77, and the present situation on the campus brings back memories of the Emergency days”, a statement signed by Prabhat Patnaik, C.P. Bhambri, Anil Bhatti, Utsa Patnaik, Zoya Hasan and others said.

This sentiment has also been echoed in a statement whose signatories include D.N. Tripathi (the JNUSU president who was arrested during the Emergency) and Sohail Hashmi. “We condemn in the strongest possible words the high-handed police action in JNU. This is reminiscent of the dark days of the emergency when the state had swooped down on the campus and had arrested many on false and trumped up charges. While we hold no brief for those who raised objectionable slogans, the arrested students have been charged with anti-national activities, precisely the charges on which we were also arrested during the draconian emergency”.