As Indian Universities Go Neoliberal, Protests by Students Offer a Ray of Hope

Critical thinking and analysis are mere branding tools in glossy brochures, while the goal of administering the university becomes one of producing homogenous robots. 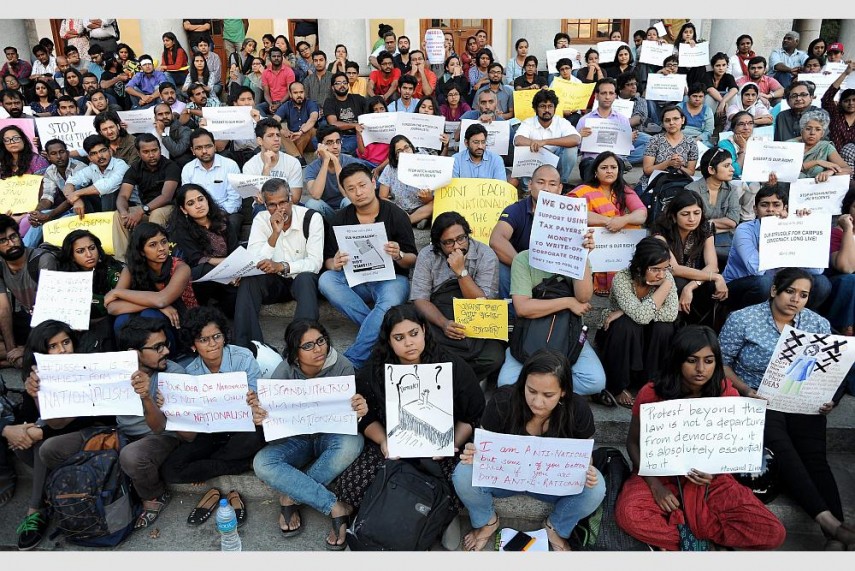 File photo of a protest in solidarity with JNU and HCU. Credit: PTI

The rise of the administrator class is a global phenomenon across universities in neoliberal times.

The neoliberal university is less a space for critical engagement, debate and inquiry, and more a skills factory for the technocratic workplaces owned by transnational capital. In the neoliberal university the student is a product, packaged for the marketplace in marketing slogans and brand identities. Professors are measured in economic terms of productivity and efficiency and cast in the branding race.

Liberal arts and critical thinking are repackaged in the neoliberal university to serve the needs of the market. Instrumentalist logics about Silicon Valley innovators in the tech industry being liberal arts students is the premise for pushing a neoliberal version of liberal arts.

To run the neoliberal university, career pathways are forged for administrators who can discipline the university into an instrumentalist assembly line of well-calibrated workers.

To administer a university is to carry out the tactical frameworks that have been figured out by powerful corporate donors and state actors. The administrator is a technocrat, specialising in techniques of implementation and evaluation.

In such a climate of neoliberal transformation of universities globally, critical thinking and analysis become mere branding tools in glossy brochures, while the goal of administering the university becomes one of producing homogenous robots with sophisticated skillsets who perform pre-programmed scripts.

Recent neoliberal transformations of education in India have been marked by a parochial emphasis on skills training to complement the authoritarian impulse of a right-wing Hindu government that wants to turn universities into sites of Hindu propaganda. The transformation of Indian universities in the blueprint laid out by the BJP is handmaiden to the “Make in India” campaign.

The goal: to produce efficient workers who can “Make in India”.

The technical emphasis is combined with a cultural revivalism targeting the humanities and social sciences, seeking to transform these disciplines along the lines of chauvinistic propaganda. Discovering Sanskrit texts, reading Hinduised histories, examining Vedic science and learning about Hindu culture have been framed as the key agendas of a humanities and social science education, pushing forth a narrow non-history of India that is devoid of evidence and closer to mythology.

The neoliberal agenda has been remixed with the Hinduised agenda to offer a cocktail that promises to bring back India to its lost glory as an Asian leader in higher learning, manufacturing human capital that is Indian in spirit and global in skills.

That the BJP-led government has been hell bent on shaping education in the model of BJP-RSS propaganda is visible across the various leadership appointments being made in universities across the country. Administrators closely aligned with the party line, often without adequate qualifications, are being pushed onto universities across India. These university administrators are the eyes and tools of the BJP, dancing to their master’s tunes while implementing a saffron agenda in higher education.

In achieving its agenda of creating universities as Hindu propaganda houses, the BJP-led government has simultaneously launched a concerted attack on critical thought and dissent. Protesting students have been attacked by goons of the Akhil Bharatiya Vidyarthi Parishad (ABVP), while the state machinery has launched its attack on students through police force.

In this backdrop of the rise of the neoliberal university reinvented for cultural propaganda, the surge of student protests across India against the authoritarian policies of puppet administrators is a sign of much hope. These protests speak to the resolve of the students to protect universities as sites of learning, debate, and free expression.

Contrary to how the protests have been projected as deviant, these forms of student protests have been fundamentally about safeguarding the university as a site of thought and critical engagement. The voices of the students across campuses in India, their resolve, and their participation depict a spirit that is committed to protecting the university as a site of learning and critical dialogue.

Quite ironically then, the BJP-appointed administrators at these universities, it would seem, are insistent on breaking down this very spirit of learning and dialogue. The targeted campaign to silence dissent is not driven by reason, rather by preconfigured agendas. Moreover, there isn’t even a performance of transparency and objectivity in how decisions are carried out.

In the most recent example of the decision of the Jawaharlal Nehru University (JNU) administration to punish students at JNU, who were allegedly involved in a range of supposedly disruptive activities including arranging a purportedly “anti-India” event where “anti-India” slogans were raised, based on the High Level Enquiry Committee (HLEC) report, reasoned argumentation and evidence-based deliberation have been displaced with preconfigured judgments and BJP propaganda. The students needed to be punished, this was already decided by a biased HLEC. The HLEC then performed a charade of inquiry to arrive at the decision of imposing a range of punishments from fines to rustication for varying periods. The processes through which the HLEC was formed were opaque, raising questions about the objectivity and fairness of the processes, and rendering them closed to the views of the students. The very notion regarding the supposed anti-nationalism of an event interrogating the hanging of Afzal Guru was left unquestioned, a sign of authoritarian times.

The punishment meted out to the students at JNU are similar in pattern to the punishment handed out to Rohith Vemula, a Dalit student leader at the University of Hyderabad, who committed suicide after having been unjustly punished by the university administration. Rohith was a member of the Ambedkar Students Association, a Dalit student group that drew attention to various forms of injustices in Indian society, and was protesting the hanging of Yakub Memon. At the event, a confrontation had broken out with activists of the ABVP. Because of alleged intervention of the BJP leader from the region, Bandaru Dattatreya and the pressure exerted by the BJP government, Rohith’s fellowship was withdrawn and he was expelled from the hostel, which ultimately led to his suicide.

Over 10,000 students marched to the capital on February 23 to protest Rohith’s death. In their protest, the students draw attention to the disenfranchisements of Dalits in a Brahminical education system and the attacks on Rohith that was systematically orchestrated by BJP-ABVP. The protest of the students is a protest against the chilling climate of control being exercised by BJP on university campuses in India.

Similarly, the HLEC decision at JNU is being protested by students not only at JNU but across campuses in India.

As students at JNU protest the decision with an indefinite hunger strike, the administration has been silent, depicting its colors as an administrator class of the Hindu Right.

The BJP-appointed vice-chancellor of JNU responded with a notice that the hunger strike was illegal, without really opening up a space for conversation. Rather than showing gestures of care (which one would expect the VC to demonstrate as a teacher), his recourse was to instruments of disciplining. Rather than being open to listening to the student voices and committing to a fair process, the VC was predisposed toward performing out his assigned role through opaque processes.

What strikes me about the VC’s position is his inability to demonstrate an ethic of care towards the students of a campus that he is supposed to lead. This perhaps is the image of the neoliberal university administrator, unable to be moved by the pain of students, unable to find a heart for compassion.

On the ninth day of the strike, I read on Umar Khalid’s Facebook wall “JNUSU President Com. Kanhaiya in an extremely serious condition. Vomiting for the past few hours and in a semi-unconscious state. He has been rushed to the hospital. Health of the rest of the students also deteriorating fast” accompanied by images of Kanhaiya Kumar on a stretcher. Umar then goes on to reiterate the resolve of the students: “The hunger strike is not going to be withdrawn till all punishments are taken back. Onwards to the academic council meeting on May 10, let us intensify the movement. Let once again thousands pour out on the streets of JNU.”

As I come across images of fasting students and their declining health, I am left to wonder about the leadership vacuum that we are witnessing across universities such as JNU. The silence of the VC and his lack of leadership are signs of an administrative class that has figured out the politics of opportunity-seeking as a way to climb the administrative career, but forgotten the basic commitment of a teacher to care for one’s students. This perhaps is one of the most visible impacts of neoliberal transformation of education, the production of an administrator class that has little heart in its opportunity-seeking trajectory, driven toward personal success and perfected through the art of supine submission to power.

What stands as a ray of hope in these dark times, amid this deliberate attempt to transform JNU, is the resolve of the students and their teachers to imagine a politics of hope. The JNU Teachers’ Association (JNUTA) has stood by steadfastly as students have taken on the authoritarian impulses of the state, with teachers lending their bodies in solidarity and in demonstrations of an ethic of care.

It is perhaps this very ethic of care that is the antidote to the neoliberal tide of saffronisation India is witnessing.

When a heartless administration has turned its face away from the students in an authoritarian judgment delivered through opaque performances, the teachers offer a glimmer of hope.

In these neoliberal times, these students and teachers stand in as harbingers for what universities used to be and for what they could once again be: as spaces of learning, critical thought and authentic commitment.

As JNU teaches us, to retain the character of universities as sites of learning however, is an everyday struggle for educators, a struggle I hope we are willing to take up with courage and commitment.

Amid the large-scale onslaught of corporatised agendas that seek to turn universities into instrumental workshops, the resolve of JNU students and protesting students across India offer the hope for another imagination, grounded in an ethics of care.

Mohan J. Dutta is a professor at the National University of Singapore (NUS)