Students are wards of the institution, they are not and cannot be treated as a resource, unless we believe they are resources for the promotion of knowledge. 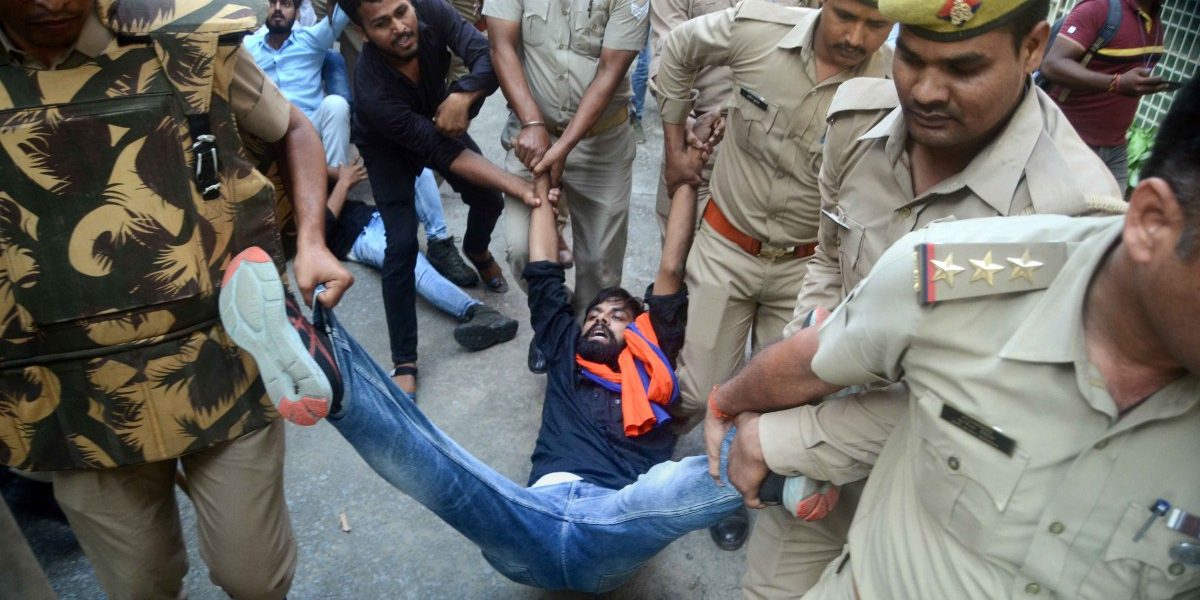 Police personnel try to detain students of Allahabad Central University during a protest against the fee hike, in Prayagraj, Saturday, Oct.1, 2022. Photo: PTI

The report of students considering leaving the university because of fee hike ought to give pause to those who are interested in the changing nature of public universities.

The principal issue is the transformation in how institutions have come to view the students.

Already, with the API (Academic Performance Indicator) that allegedly measures faculty performance, the student has been turned into a ‘resource’: the University Grants Commission (UGC) allocates API points for PhDs and MPhils (until the National Education Policy 2020 abolished the programme) supervised.

Thus begins the race to complete a certain number of PhDs so that each gains the supervisor a certain number of points that qualifies her/him for the next stage of promotion. The large number of PhDs produced annually are perhaps the result of such a transformation of the student body into a means of accruing points, a programme of career progression for faculty that has diminished the emphasis on research as knowledge-production.

Where, one could ask, are these PhDs now?

Has the PhD thesis pioneered anything, or have we omitted to distinguish between summary and scholarly analysis?

When we as a nation have emphasised numbers (enrolment, numbers of PhDs supervised) over anything else, the researcher and the project are both mere resources: the nation and institution can claim large numbers of PhDs produced, the faculty gets a promotion – neither of which has perhaps enabled the nation to significantly add to the body of existing knowledge.

Also read: ‘Will Have to Quit’: Allahabad University Admin Unmoved as Protests Against 400% Fee Hike Rage

Indeed, the UGC a couple of years ago implicitly admitted to the poor quality of the PhDs in India when it called for a research project (funded by the UGC) to examine the quality of theses and dissertations submitted. Why was such a project deemed necessary at all, unless there was some worry about the quality of PhDs?

And now, the students would also be a resource in another form: they constitute the revenue-generating body of the university. Where the funding for research and the larger domain of higher education falls, the institution turns to tuition fees as a means of revenue.

Students are wards of the institution, they are not and cannot be treated as a resource, unless we believe they are resources for the promotion of knowledge.

In the uneven demographics of the Indian higher educational institution, the students cannot be charged with generating revenue. The institution is tasked with the responsibility of ensuring the wards acquire an education and do not exist as ‘resources’ that help the university raise funds.

What about faculty as resource?

At this point it is perhaps pertinent to ask whether revenue generation is not the responsibility of the faculty. Annual increments accrue to faculty (student scholarships are not hiked annually), promotions and privileges come along at the appointed time.

Then the question to be asked is: alongside the annual increment, does the faculty ratchet up the quality of their teaching? Are their publications improving (which in the Indian context, can best be defined as faculty moving away from publishing in predatory and cloned journals, and simply desisting from plagiarising)?

In short, when there is financial gain and improvement every year, is it odd to expect better performance – quality-wise, not as numbers – from faculty? Why do institutions not ask faculty to contribute to revenue generation by offering more ‘market-driven’ courses? If we are indeed moving towards academic capitalism, then surely the well-paid faculty ought to contribute to this new capitalist mode as well?

The idea that faculty ‘contribute to the intellectual climate of the country’ (as a senior colleague once, in a fit of absence of mind, pronounced about himself!) is rendered an ideal especially when the burden of revenue generation falls upon students in terms of fee hikes while the faculty produce intangible contributions. Can we as a nation expecting students to foot the bill for education call for an audit of faculty work – courses taught, updating of courses, modes of assessment, publications that contributed to the discipline? Can we – dare we? – publicise student feedback of faculty (starting with the senior-most professors and working our way downwards)?

The UGC has opened a single window/portal for all student grievances. This is admirable. Why not have a portal where any reader of academic work can upload a faculty’s plagiarised, poor and pathetic research publications highlighting whatever is wrong with them?  Or does the idea(l) of ‘transparency’ not apply to faculty?

Or are we on the cusp admitting that faculty exist as lotus eaters and lilies of the valley? Surely, this is an anomaly in how we perceive ‘resources’?

A shrinking publicness of the public institution?

High fee structures, as numerous commentators have repeated ad infinitum, are designed to exclude large numbers of students from ever enrolling. This automatically makes the student body the most vulnerable in the education system. Student loans and debts will be unavoidable if they wish to fund their education, with several years of paying off these loans ahead as their future.

The repetitiousness of the curriculum, poor teaching and indifferent research supervision (someone I know mentioned that an MPhil supervision means a ‘quick API’) means the student exits the institution with meagre employable skills, which in a constricted job market of high competition, places her at a disadvantage.

The added ‘advantage’ of an exit option with just diplomas and certificates rather than full-fledged MA degrees renders the student even less equipped for the job market because at some point in their future career, this degree would prove inadequate, like their meagre skills.

All the above ensure a shrinking of the very publicness of the public university. The ‘publicness’ of a university is not merely about the increased inclusivity of the student population in its portals.

It can also be defined as the way the institution enables its students to contribute significantly to the creation of a public in the geo-cultural space of the nation: a public that is alert to propaganda, observes and resists demagogues, has developed a high level of self-reflexivity and critical thinking, and accepts universal human rights as self-evident and inviolable.

It is precisely this role of the students after they exit the institution that is at stake because they are exiting as vulnerable – if not more – as when they arrived, thanks to debt traps and poor skills from their certificates and diplomas.

A public university cannot be transformed into a place where drone-workers with low skill levels and destined for only certain kinds of job markets are produced. A public university, writes John Douglass in his The Condition for Admission: Access, Equity and the Social Contract of Public Universities (2007), enters into a social contract

“…that included the profoundly progressive idea that any citizen who met a prescribed set of largely academic conditions would gain entrance to their state university – a sharp contrast to most private institutions that, throughout most of their history, proactively used sectarian and racial, and sometimes social caste, criteria to exclude groups.”

Douglass emphasises the role played by such public institutions in the making of American democracy:

“America’s venture into mass higher education, the first in the world, offered an essential route for socioeconomic mobility and, ultimately, created a more equitable and prosperous society.”

Such a society is achieved, argues MIT academic and international security policy expert Carl Kaysen in his The Higher Learning: The Universities and the Public (1969) through the creation of new knowledge, the transmission of this knowledge to generations, the ‘application’ of practical knowledge to solve social problems and the ‘socialisation of late adolescents and young adults, teaching them how to fit into the social roles they will fill as adults’.

Thus, when the education system is being rewired towards a different agenda – students as resources, education for only certain kinds of skills and markets – it is this last, the forms of socialisation, that is the worst hit. That is, the quality of and access to the public good that is education (defining ‘public good’ as non-rivalrous and non-excludable, such as clean air) is irrevocably damaged.

Knowledge itself which is almost a pure public good, as Nobel Laureate Joseph Stiglitz argued, is being altered drastically, broken into fragments so that no cohesive understanding of any discipline is possible for the student enrolling in short-term programmes being currently touted as the next revolution in education.

Observing the stagnation, as he terms it, of higher education in the USA, John Douglass identifies as a cause ‘declining political interest and government investment in public higher education’ and, crucially, ‘increased fees without adequate increases in financial aid’.

This last, of course, is what we began with: the student body as an economic resource.

In Universities and the Public Sphere (2012),  their study of public universities in the age of globalisation, Brian Pusser, Ken Kempner, Simon Marginson, and Imanol Ordorika argue that there exist three imaginaries that ‘shape the sense of the possible in higher education’:

As  Puuser et al note, the third has ‘has an egalitarian, inclusive economic logic: as the network expands, each member receives ever-increasing benefits, tending to global universality’.

So when we have inverted the role and purpose of the student body, faculty roles and  state support – increasingly withdrawn, with public universities asked to be ‘self-sustaining’ – we have actually shrunk the field of global benefits that, with ever-increasing connectivity, could accrue to our younger citizenry, the students. By implicitly or explicitly redefining students as ‘resources’, as substitute lodes in the place of state support, we prepare the ground for their vulnerable futures, and a severely constricted public sphere.

This is higher education’s crepuscular moment.

Pramod K. Nayar is a professor at the Department of English at the University of Hyderabad.