Chief minister Arvind Kejriwal then said there is a need to “develop an environment wherein we all and our children constantly feel patriotic at every step they take". 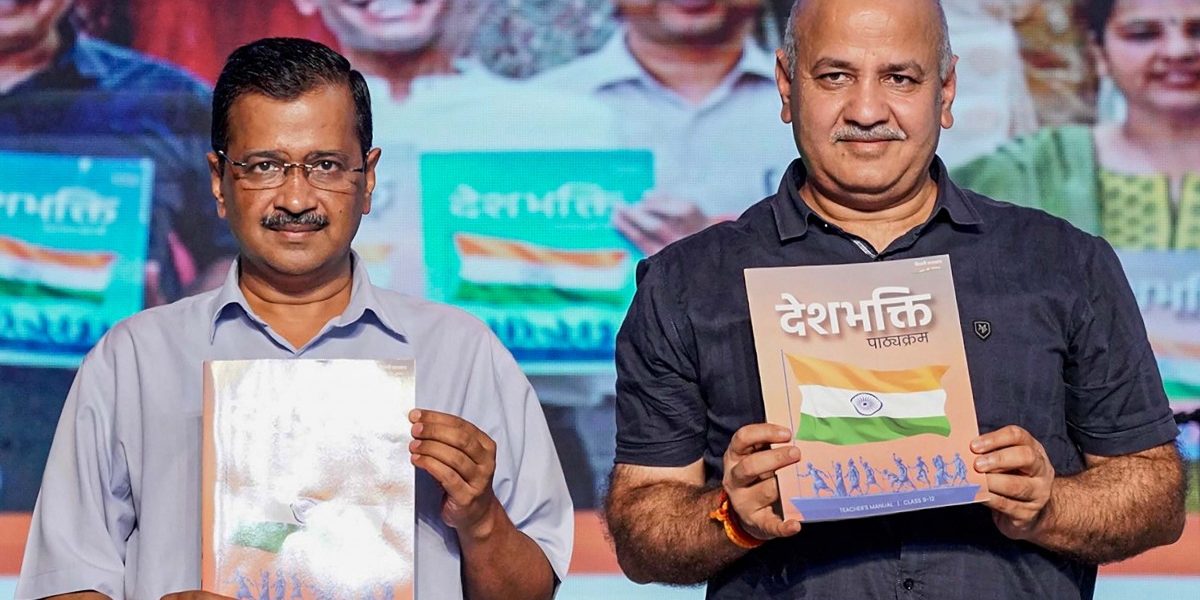 New Delhi: The Aam Aadmi Party government in Delhi, which many political observers now believe has taken to adopting a ‘soft Hindutva’ line, on Tuesday launched its “ambitious” deshbhakti curriculum for Delhi government schools, which it hopes will spawn generations of “patriots in the truest sense”.

The scheme was launched by Delhi chief minister Arvind Kejriwal on the occasion of the birth anniversary of freedom fighter Bhagat Singh at an event organised at Chhatrasal Stadium. The stadium reverberated to shouts of ‘Bharat Mata ki Jai’, ‘Vande Mataram’ and ‘Inquilab Zindabad’ during the ceremony.

The scheme was first announced by Kejriwal on the eve of the Independence Day in 2019. It also found a mention as one of the 28 promises which were made by the party ahead of the Delhi assembly elections in 2020.

Speaking during the launch, Kejriwal recalled the sacrifice of Bhagat Singh at the age of 23 and said, “I’ve read about his life in depth. When you learn about his story, you get goosebumps, you get a different feeling of exuberance and motivation. This feeling is called deshbhakti (patriotism).”

Kejriwal then said there is a need to “develop an environment wherein we all and our children constantly feel patriotic at every step they take. We can only imagine what the future would look like if this happens.”

Giving his own definition of patriotism, he said: “Deshbhakti is present within each and every individual of this country. It is something one is born with. But it needs a push to wake up.”

He added that “in the last 74 years, we taught physics, chemistry, maths in our schools but did not teach deshbhakti to the children; the sense of deshbhakti is within all of us but it needs a push to rise”.

No textbooks, students to be taught through three handbooks

On what his government aimed to achieve through the course, he said, “We are producing all kinds of professionals, but we are not developing deshbhakt (patriotic) professionals. We are not saying we won’t promote professions, we will continue to support all kinds of education, but we will add a touch of deshbhakt values to them. We will develop deshbhakt doctors, lawyers, engineers, actors, singers, artists, journalists and so on and so forth.”

The chief minister then declared that his government has “worked very hard to develop this unique framework” and expressed hope that it would “be instrumental in the development and growth of this country”.

Kejriwal said the curriculum will be rolled out from nursery to class 12. While there will be no textbook for students, handbooks have been designed for facilitators in three categories – nursery to class 5, class 6-8 and class 9-12. The handbooks for the two senior categories – with 100 stories of freedom fighters – were also released at the event.

Deputy chief minister Manish Sisodia, who also holds the education portfolio, said it took two years to come out with the deshbhakti curriculum because of the COVID-19 pandemic but it has finally been launched in the 75th year of Indian independence.

Elaborating on what the course entails, Sisodia said: “This is not just going to talk about deshbhakti, but inculcate a passion for it. This will not be preaching moral values – we will not expect students to memorise historical facts, but expect them to think about their own patriotism.”

Sisodia also spoke about how the curriculum would make the students introspect on the level of commitment and passion of freedom fighters and embody it. “We will bring about this passion and patriotism in the hearts of our students today. By the time they are 19, they will become like Shaheed Hemu Kalani, who gave his life for the country at such a tender age,” he said.

Five minute ‘dhyaan’ before every period

The minister said from nursery to class 12, the students would thus be taught at least 700-800 stories and 500-600 patriotic songs and poems. He also declared that every class will now begin with “deshbhakti dhyaan” (a concentration exercise) of about five minutes “which means that a student would remember five patriots daily”.

Incidentally, a large number of schemes of the AAP and its approach towards issues of religion have been called into question in the recent past. The party, which won the last two elections in Delhi comprehensively on the back of support from Dalits and Muslim, apart from other sections, has over the years made several announcements which are seen by political watchers as veering towards mild or `lite’ Hindutva.

AAP leaders have done much to show their ‘Hindu credentials’

The way Kejriwal had recited the Hanuman Chalisa and made highly publicised visits to various temples during the elections had indicated that somewhere, the party was trying to show its religious side to win the support of the majority community.

More recently, AAP also took out `tiranga yatras’ or tricolour marches from Ayodhya and others religious towns in Uttar Pradesh and Kejriwal promised in Uttarakhand that if his party was voted to power, it would make the state the global spiritual capital of the Hindus. AAP has also supported the move to disband the Char Dham Trust set up in the state, against which a large number of temple priests have been protesting for nearly two years now.

Born out of movement where Bharat Mata image was prominently displayed

While it is a known fact that AAP was born out of the Lokpal movement launched by Anna Hazare in 2011, which was supported by several right-wing groups and in which the image of Bharat Mata was splashed across the stage where the leaders sat, the party had claimed to possess secular credentials. 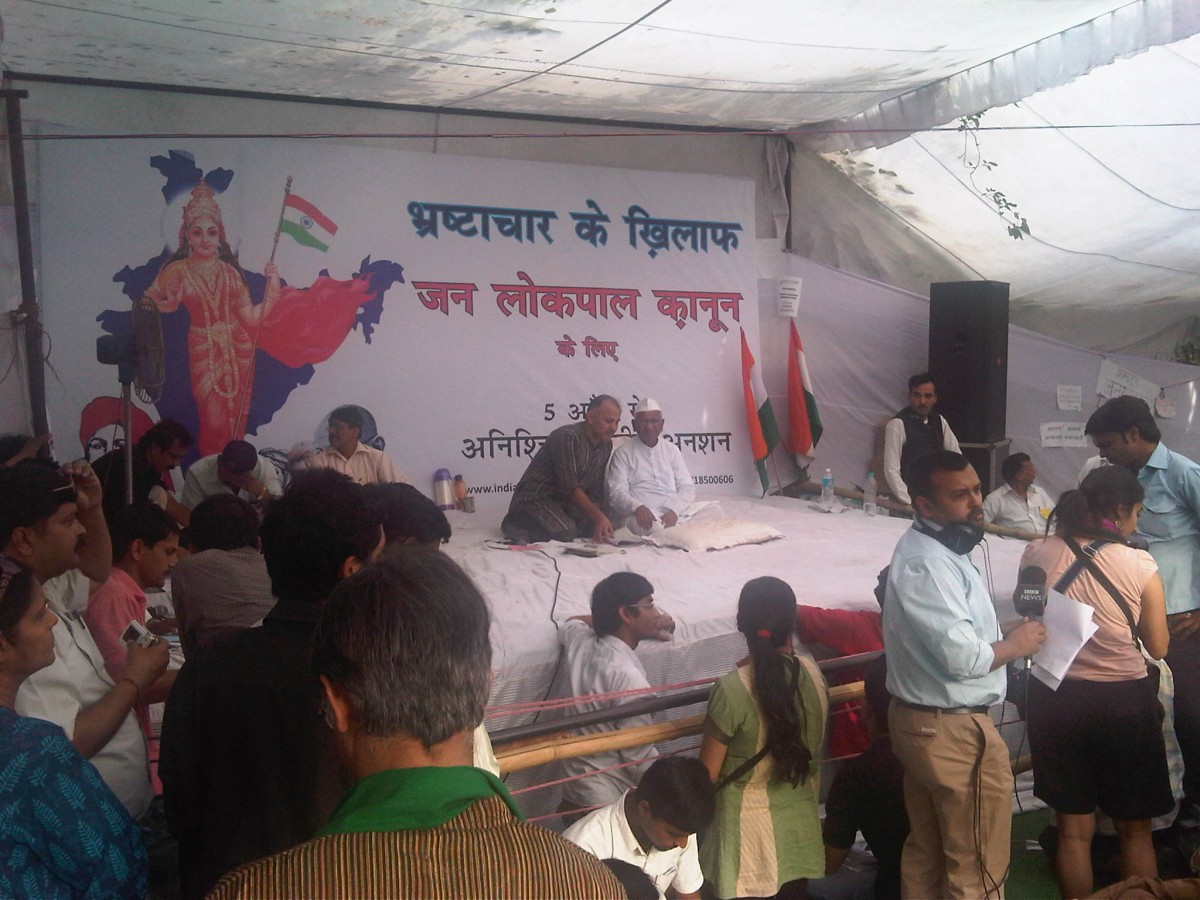 Anna Hazare in front of an image of ‘Bharat Mata’ during the India Against Corruption movement in 2011. Photo: Wikimedia Commons

It was its opposition to the BJP that won AAP support among the minorities. However, AAP has gradually distanced itself from some key issues. It did not take a strong stance during the anti-CAA protests, and its positioning during the North East Delhi riots of February 2020 and its aftermath also left many, including from the minorities, feeling distraught.