A Syllabus on Sedition 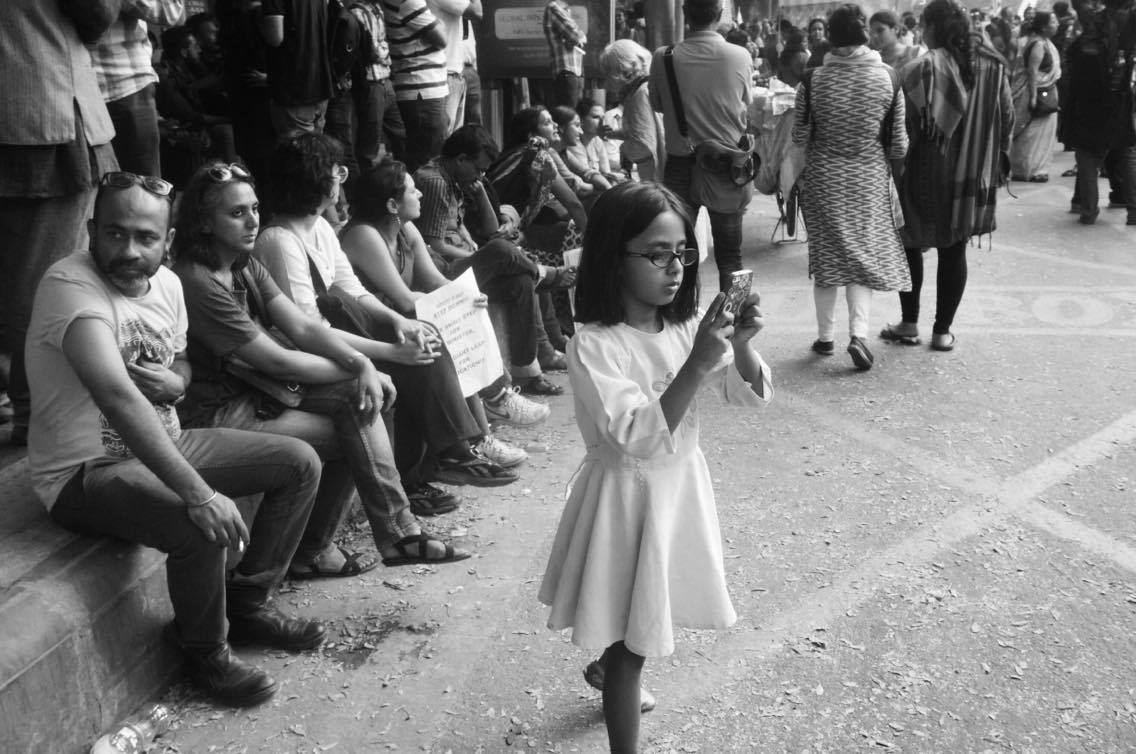 Getting the story straight for the future generation. Credit: Shome Basu

“Perhaps what has been most baffling about the fallout from JNU, following the February 9 protest, has been the reckless reporting in many quarters of the mainstream media and across the web. Possibly slanderous and libelous, the coverage has no doubt been unethical, irresponsible, and more sensational than informative,” Zack Shlachter told The Wire.

Seeing this coverage,Shlachter, a writer and member of the Indian diaspora based in Austin, Texas, decided to a create what he has called the “JNU Distance Learning Sedition Module”. “This syllabus is an attempt at curating some of the more reliable articles, presenting vital counter-narratives, and providing slightly deeper context on some of the issues at play than the news cycle permits in the era of Arnab and Twitter,” Shlachter explains. “…the goal is to arm readers with information, context, and arguments that might help clarify their own positions and prepare them to better engage, or at least understand, those for whom this whole snafu is as inscrutable as the right is to us. Aside from the media’s propensity to misinformation, this unfolding drama has shown how ideas now passé to academics and activists — ideas questioning the nation-state and nationalism, the caste hierarchy, the Indian state’s jurisdiction over Kashmir, or the monolithic and suspect nature reflexively ascribed to “Muslims” — are utterly foreign and inflammatory not just to the right, but to wide swaths of mainstream society. These are not all “raving sanghis” but very often our own family members, friends, classmates or coworkers, and neighbors. We need to do better at communicating, and at understanding the appeal of the right, if we are to ever realize the ideas that have become so self-evident to us”.

The syllabus that he created is doing the rounds on social media. It is reproduced below.

“Zee News Journalist Quits in Disgust Over JNU Coverage, Tells All in Letter”

The Trial by Franz Kafka

Caste. Sedition. Oppression: How a Student’s Suicide Sparked an Uprising in India

The other sedition arrest — SAR Geelani

Why Does No One Care About The Sedition Case Against SAR Geelani?

“Mulakat Afzal: The first interview Mohammad Afzal gave from inside Tihar jail, in 2006”

“How The Left Won JNU” (excerpt from JNU: The Making of a University)

“Emergency Files: How the students of JNU fought the Emergency”

“Why JNU’s Kanhaiya Kumar Did Not Commit Sedition, And Won’t Get Convicted For It”

“Sedition frenzy: How the media painted atheist and communist Umar Khalid as an Islamist”

“The art of manufacturing international outrage”

“A History of the Infamous Section 124A”

“Sedition and the government”

“No matter who’s ruling, they just won’t brook dissent” (a timeline of sedition cases across India, 2009 — present), in chart form

“The Second Coming of Sedition”

“Mridula Garg, Soli Sorabjee, Fali Nariman and Others on the Use and Abuse of Sedition Laws”

“Between Sedition and Seduction: Thinking Censorship in South Asia”

“Sedition and the Status of Subversive Speech in India”

“What is Sedition? – I: The Kedar Nath Singh Case”

“Sedition as Anti-Democratic Speech: The Paradox of Liberal Neutrality?”

“Savarkar (1883-1966), Sedition and Surveillance: the rule of law in a colonial situation”

“Sedition Laws and the Death of Free Speech in India” (Centre for the Study of Social Exclusion and Inclusion Policy; National Law School of India University, Bangalore; Alternative Law Forum)
“An Analysis of the Modern Offence of Sedition”

“Once Again, Sedition is at the Heart of Defining the Nation”

“Emergency Provisions in the Indian Constitution: A Study of the ‘Internal Disturbance’ of 1975”

“Pilate’s Paramount Duty: Constitutional ‘Reasonableness’ and the Restriction of Freedom of Speech and Assembly”

“A treatise on the law of sedition and cognate offences in British India, penal and preventive: with an excerpt of the acts in force relating to the press, the stage, and public meetings” (1911)

“On Kanhaiya: It is Time to Stand Up and Be Counted”

“If Kanhaiya Kumar is to be Prosecuted, then Charge Me With Sedition Too”

“Umar Khalid is no jihadi. BJP is pushing him the Rohith way”

“A Thousand Kanhaiya Kumars and Umar Khalids Will Bloom”

“I see Rohith in each one of you, says Radhika Vemula”

“Be Warned, the Assault on JNU is Part of a Pattern”

“Come on man, be clear, what comes first—Nation, or Democracy?”

“JNU stir: Why ‘anti-nationalism’ is an empty abuse that has no place in a free society”

“Anti-fascist movements — how inclusive are they?”

“Why I Joined the Sangh, and Why I Left”

“All Our Goddesses Are Armed.: Religion, resistance and revenge in the life of a militant Hindu nationalist woman”

Walter Andersen’s 1972 articles for the Economic and Political Weekly on the RSS: Parts I, II, III, IV

“A Prelude to Sedition: The ABVP’s Campaign Against Anti-National Activities At JNU Did Not Occur Overnight”

“A Conversation With Vikram Chauhan, The Face Of The ‘Nationalist’ Movement Against JNU”

“The need for communication: The broader issue that Delhi police’s confusion reflects”

“Why Does This Black Guy Hang Out With the Klan?”