Creating better portability between different retirement strategies, while acknowledging that the EPF is often a back-up for the Indian welfare state, is the method that should be adopted. 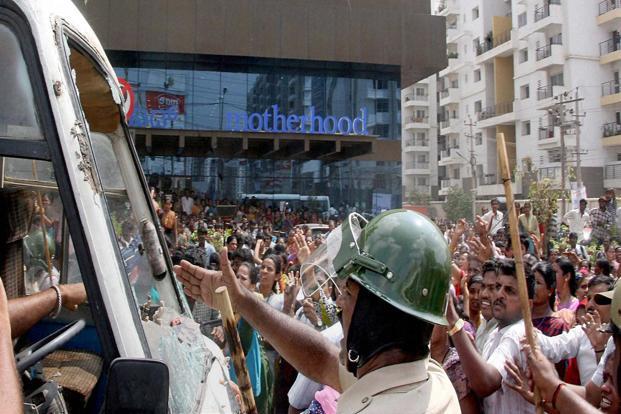 New Delhi: Blink twice and you’ll miss it. Over the space of the last three months, the Centre has backed down twice over two controversial proposals it had made with regard to the employee provident fund (EPF) scheme.

In this year’s Union Budget, the government introduced a 60% tax on the EPF corpus on retirement, leaving 40% tax free (which later was clarified that only the interest would be taxed and not the whole corpus). This tax cause widespread outrage amongst the roughly 6 million Indian residents who earn more than Rs.15,000 a month, thus voluntarily accepting EPF, and who the decision primarily affected.  Less than a week later, on March 8th, this was rolled back by Finance Minister Arun Jaitley.

The outrage this week however — most visibly from the workers of various garment and textile worker unions in and around Bangalore — deals with a government notification introduced a few weeks before this year’s budget. On February 10th, the government kicked off its EPF ‘reform measures’ by capping what people could withdraw from their EPF corpus before they retire.

Put simply, the government decreed that in order to claim or withdraw whatever your employer has contributed to your EPF, one has to wait until the age of 58 (the official age of retirement). You can withdraw your own contribution, but whatever your company has put in for you can’t be touched until you turn 58.

Why does this rule affect the working class – daily wage labourers, factory workers etc — so much more? Primarily because before the new rules came into effect, people were allowed to withdraw their entire EPF corpus if they were unemployed for more than two months. Unemployability is a fact of life amongst contract workers and they are often forced to draw upon their EPF corpus during periods of unemployment. The new rules ensure that they can only withdraw their own contribution if they haven’t hit the age of 58.

Another major grievance of the workers in unorganised sectors is that retirement age of 58 doesn’t apply to people who toil away in informal industries. Factory work is often affected by the vagaries of the global economy and most importantly by a worker’s health. Speaking to The Hindu, Jayaram K.R from the Garment and Textile Workers’ Union points out how most workers are unsure of their jobs after the age of 40. The new rules would mean that they would have to wait 18 years until they could touch their full savings.

After a few days of protests in the street of Bangalore leading to major traffic disruptions and the burning and stoning of public buses and police jeeps, the government decided to roll back its February 10th notification on the conditions surrounding EPF withdrawal. Labour Minister Bandara Dattatreya, in a statement, said: “Workers are now allowed to withdraw the entire amount from the provident fund as per existing provisions of the EPF scheme 1952 including the employers’ share of 3.67%.”

What was the government trying to achieve by restricting employer contribution withdrawals until the age of 58? In order to understand this, a little history is in order. The EPF scheme has always been positioned as a retirement product: even before the new rules were announced, withdrawals were allowed only under certain circumstances.  While complete withdrawal was allowed if a person was unemployed for more than two months, partial withdrawal was allowed in certain cases such as medical emergencies or funding a child’s marriage or education.

What was happening however in reality was that because of a number of loopholes, private-sector employees often withdrew their whole EPF corpus when changing jobs. While EPF eventually became portable through the introduction of a ‘Universal Account Number’ (UAN), before that people could get withdraw their PF completely and get a different EPF account number every time they switched jobs.

While there are a number of perfectly understandable reasons why people would do so — a classic example is moving to a job abroad or switching to a start-up that doesn’t offer EPF — the government’s stance is that perhaps people are taking undue advantage of the EPF scheme.

In an interview with Financial Express last year Central Provident Fund Commissioner K K Jalan underscores this point by stating: “If one withdraws the full amount every time, then where is the use of UAN? No country in world allows full withdrawal before retirement.”

As Livemint has reported, the new rules, according to EPFO officials, were put in to “lend stability to UAN and to discourage employees to close their UAN accounts”. A number of reforms, including the ability to claim EPF online, depended on the UAN system being stable.

These new rules, however, may not have been the best way of tackling this issue.

The government’s intention here is two-fold: to restrict withdrawals to make EPF a proper retirement product while strengthening a national pension system that creates steady and consistent retirement pensions. An important aspect of this plan, as the government sees it, is to nudge India’s working class and white-collar employees towards the national pension scheme — an initiative that many have pointed out exposes people to risky market-linked savings.

The February 10th notification that the workers of Karnataka have risen up against, however, is a poorly-thought way of achieving this.

Not only can the working class and the upper-middle class not withdraw their employer’s contribution — which hurts the worker in case of injury or unemployment and the middle-class employee if they want to quit to raise a family or move to a start-up –they also can’t easily opt out of EPF until they quit their jobs or retire. While the EPF scheme is only mandatory for people who earn less than Rs. 15,000, in actual practice it’s extremely difficult to opt out for anybody who enrolls because companies don’t allow it.

Therefore if the government wants to continue the push towards a proper retirement, financial product and the National Pension Scheme, it needs to understand that at the moment the average employee can’t easily switch between different retirement-oriented financial instruments. Creating an effective opt-out and portability system should be the first order of business.

Secondly, what is understated in popular discourse, is that EPF is perhaps the only crutch that Indians can lean on when the welfare state inevitably fails them.  Marriages are often paid for by breaking into the PF early; educations are paid for by early withdrawal; houses are often built by pre-retirement withdrawal. Shifting away from the EPF scheme, therefore, requires a great deal of more nuanced thinking and public consultation than what is currently being shown.