Even as national output has crept back to pre-pandemic levels, what remains an enduring puzzle is the dramatic fall in India’s employment rate to an all time low of around 42% lately. This is by far the lowest among all comparable Asian economies where the labour participation ratio (LPR) or active job seekers are above 60% of the employable population, as per ILO data below.

Employment rate or LPR is a measure of how many able and employable people in the economy are actually looking for work.

This means 60% of employable people in India have fallen off the job market. They are just not looking for work. Can an economy prosper with 60% of its employable people not seeking work? This is the all important question. 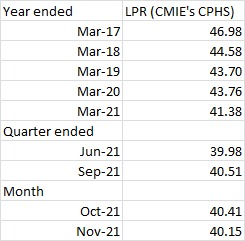 CMIE’s CEO Mahesh Vyas argues that for some unknown reasons, Indian policymakers have not paid much attention to the unusual decline in the LPR in recent years.

As per CMIE, the LPR was 47% in March 2017 and it has dramatically fallen to about 40% in just four years. Mind you, the bulk of the decline had already happened before the pandemic.

Also read: The Three Fault Lines in the Global and National Economic Landscape 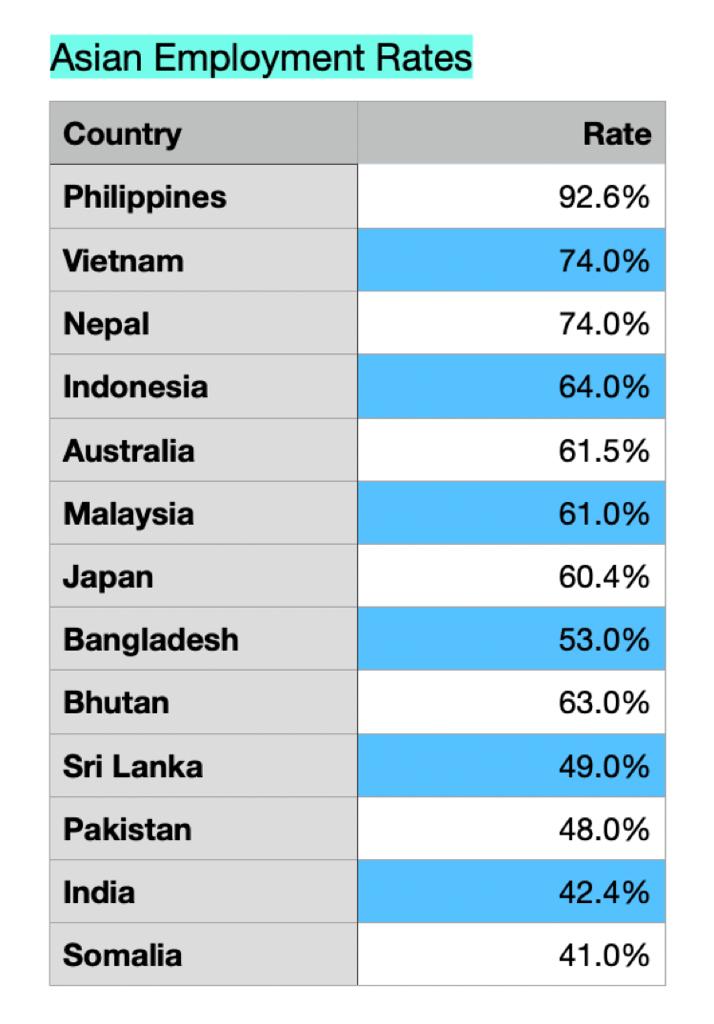 So why do Indian policymakers and economists refuse to analyse this phenomenon? I have not seen any economic survey in recent years mentioning this prominently in the first chapter capturing the overall outlook for the economy.

The fact is our policy makers have chosen to bury their heads in the sand and have refused to do a deep dive into the LPR issue.

One reason cited for low LPR is that the employment rate among the women is abysmally low, especially in big Hindi belt states like Uttar Pradesh and Bihar. LPR among women here is in single digits. Which means more than 90% of women are out of the labour market altogether. How can any economy prosper with 90% of women out of the labour market, is a commonsensical question to ask.

Back in the heydays of the economic boom – 2002 to 2010 – many economists speculated that the low participation of women in the labour force was probably because new founding prosperity (140 million people lifted above poverty from 2004 to 2012) had resulted in younger women withdrawing from the labour force to study and upgrade their skills.

Mahesh Vyas of CMIE asks a valid question: If women had withdrawn from the labour force to study and upgrade their skills, why have they not returned to the labour market even after ten years? This is the puzzle which policymakers are unable to crack.

As stated earlier, much of the decline in the employment rate had happened before the pandemic. The pandemic may only worsen things as the informal sector continues to be in a funk. The sorry state of the informal sector is revealed in just one data set. While one aspect is more workers have fallen out of the labour force, what is worrisome is many of those active in the labour force have seen a marked deterioration in the quality of their employment. For instance, the self-employed population in the labour force is now 53%. The self-employed are largely in the unorganised sector. And worse, of this large universe of the self employed, more than one-third are unpaid workers who support their household enterprise. This is underemployment really, which is counted as employed.

It is high time policymakers did a more honest analysis of not only India’s abysmally low participation in the labour force but also the quality of employment and income of those who are in the active labour force.

Prime Minister Narendra Modi must urgently set up a special task force to address this elephant in the room. Besides, the Economic Survey for 2021-22 must deal with this question upfront.

Looking away from this harsh truth will not help the government, which is prone to brushing bad news (and data) under the carpet. Already Modi seems set to preside over the lowest employment rate seen in any regime since the 1991 reforms.

Not surprisingly, this is accompanied by the worst private investment growth seen in any 10-year period. The prime minister is currently busy loudly proclaiming big development projects in UP including the Kashi Vishwanath corridor ahead of the crucial UP elections. Hindutva may be able to complement economic development but can’t supplant it totally.

A sobering thought – supported by data – has been provided by labour economist Santosh Mehrotra, showing youth unemployment having quadrupled in UP, from 4% to 19%, between 2013 and 2019.  The upcoming Uttar Pradesh polls could provide a reality check on this.

Note: A shorter version of this article first appeared on The India Cable, a premium newsletter from The Wire & Galileo Ideas.