Why a Job-Focused Social-Security Plan Is Desperately Needed

Current economic conditions may force the government's hand on an urban job guarantee scheme, but its potential side-effects must be well-debated. 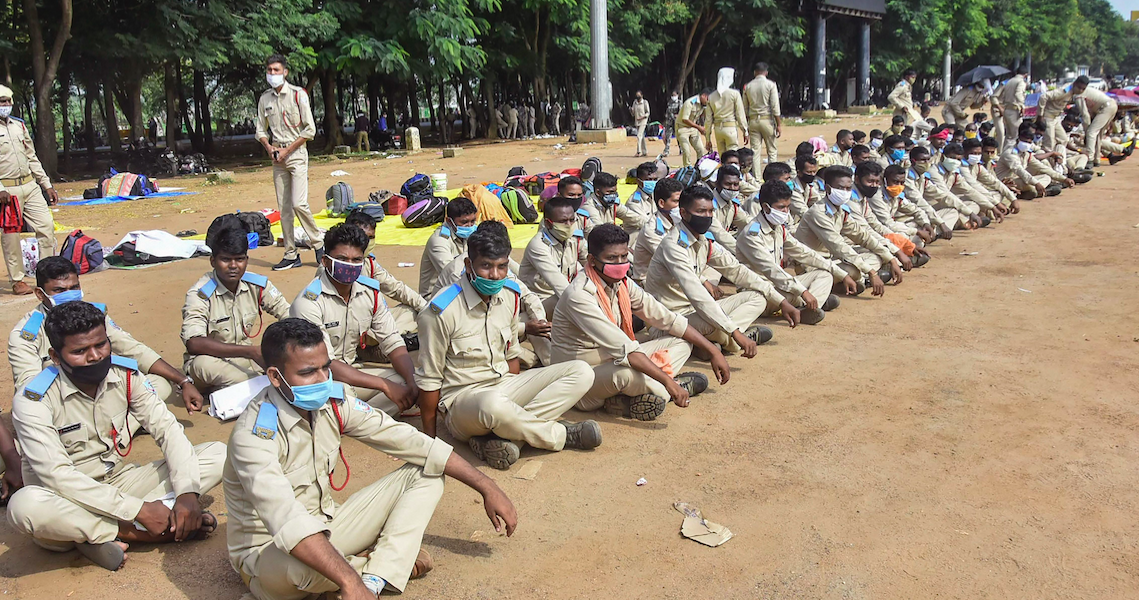 Assistant Police Personnel of Jharkhand stage a protest on the demanding regularisation of their job, at Morhabadi grounds in Ranchi, Sunday, September 13, 2020. Photo: PTI

Economist Jean Dreze, in a recent article, has put out an excellent proposal to make the idea of an ‘urban job guarantee scheme’ realisable and workable in India’s current economic circumstances.

The current economic situation – which has seen a worsening of overall worker conditions, with falling labor force participation rate and increasing unemployment rate – may have even forced the government’s hand and shows how essential and urgent a ‘job-based’ social security plan can be.

Since the pandemic-induced lockdown decimated the unorganised (informal) segment, even those working in the organised segment have been worst affected across India. More than 15.5% workers have lost their jobs while 21.7% worked zero-hours according to a recent survey conducted by scholars at LSE. Incomes of workers have fallen by around 50% and pre-existing income inequities have exacerbated further (see Figure 1 on trends in labor productivity).

The Centre for Monitoring Indian Economy’s recent analysis shows how, even within the organised salaried class, constituting around 21-22% of overall employment in India, more than 21 million salaried workers have lost employment till August 2020. Dreze’s own proposal, what he calls DUET (Decentralised Urban Employment and Training) is based on a simple idea where a government issues ‘job stamps’ and distributes them to ‘approved public institutions – public health facilities, schools, colleges, shelters, jails, municipalities, transport corporations etc.’. These approved public institutions, as per the proposal, would be “free to convert each job stamp into one person-day of work within a specified period, as long as they arrange the work”.

Some of the work that has greater demand and need (say, public maintenance of parks, railway stations, public health facilities, schools, gardening etc.) could be organised even on a part-time basis to make it easier for women to participate.

There are some clear positives from such a program. As Dreze argues, this includes:

“a) a multiplicity of approved employers would help generate a fair amount of employment through public institutions;
b) employers will have a stake involved in the work being created and this is good for boosting higher productivity that is labor-intensive (which India needs given its factor endowments);
c) institutions will require little staff since they will be the employers for these jobs themselves; and, lastly (most importantly); and
d) workers would have a secure entitlement to the minimum wage, tied with some other benefits”.

More importantly, there is clearly a high demand for public work in urban areas. A useful illustration can be observed in the municipal work of waste-management where waste-pickers, often working in unsecured working conditions, are primarily made responsible for the collection, segregation and recycling of waste. The working and living conditions of each of these workers is alarming to say the list. In the NCR area of Delhi alone, most waste-pickers stay in slum-little settlements at the (waste) landfill sites (see those residing near Bhalswa), earn less than the minimum wage for daily-work and have no worker-representation body to bargain for their rights, given the ad-hoc contractualisation of their work. A DUET-like plan can help ensure that such municipal work is recognised, better paid for, and is secured for workers through clearly defined contracts.

There is another key proposition that needs immediate consideration, namely the need to have a higher minimum-wage base tied in with the creating of such jobs. Indeed, the macroeconomics of designing a comprehensive National Minimum Wage structure has been extensively discussed, with its potential effects much debated too.

As argued by economist Rathin Roy more recently, at the heart of India’s structural demand problem, “the vector of relative (factor) prices have not been seen to be conducive to broad-basing aggregate home market demand”, and when “relative (factor) prices do not serve the national good, there is a justifiable case for government intervention”.

Of course, any deterministic calculation of a minimum wage needs to be aligned with the realities of existing macroeconomic considerations and assess its effects, say, whether the increase in wage is likely to positively impact aggregate demand for products-services in the short-to-medium term, apart from weighing other considerations.

Also read: What Job Losses in the Formal Sector Tell Us About the Lockdown’s Impact on Economy

Taking both these distinct policy-propositions from Dreze (on DUET) and Roy (on a higher NFMW) into account, is a social policy experiment worth trying now.

Though, there are clear trade-offs to be mindful of. A higher wage-based, publicly funded employment guarantee scheme will definitely impact the profit-shares of employers (public institutions in this case) and induce greater fiscal stress. One shouldn’t also see such kind of a government supported employment program to be a solution to all our labor-market problems.

Rather, a program like this must be seen as an urgent social-safety net required for ensuring fair employment at a minimum wage rate for all those who might need it. Given how bad the unemployment situation looks at this point, such a centrally funded program may be introduced as an emergency measure for a two-three years annual window and state-governments could be asked to manage the program thereafter (as and when their fiscal situation permits).

The executive role and responsibilities for designing and implementing a plan like this at a national level may be separate discussion. Dreze’s DUET plan provides a principle-outline which is surely helpful. The Centre has the executive capacity and the fiscal-borrowing space (if it wants to actually use it) to promote a more ‘job-focused’ spending plan while ensuring a flat-more universalised-minimum wage structure that can incentivise workers (even those migrating back from rural areas) and add scale to public-work (where there is demand).

There is a strong case for India’s welfare state to therefore exercise a greater focus on going beyond its old-distributive focus (on food, health) and a pursue a more direct focus on job-security and job-creation in the way it approaches its intervention over the next few months. Whatever it does and doesn’t do will have serious ramifications on the state of workers and overall labor conditions for a long time to come.