What Does the Caste Wealth Gap Look Like in India? 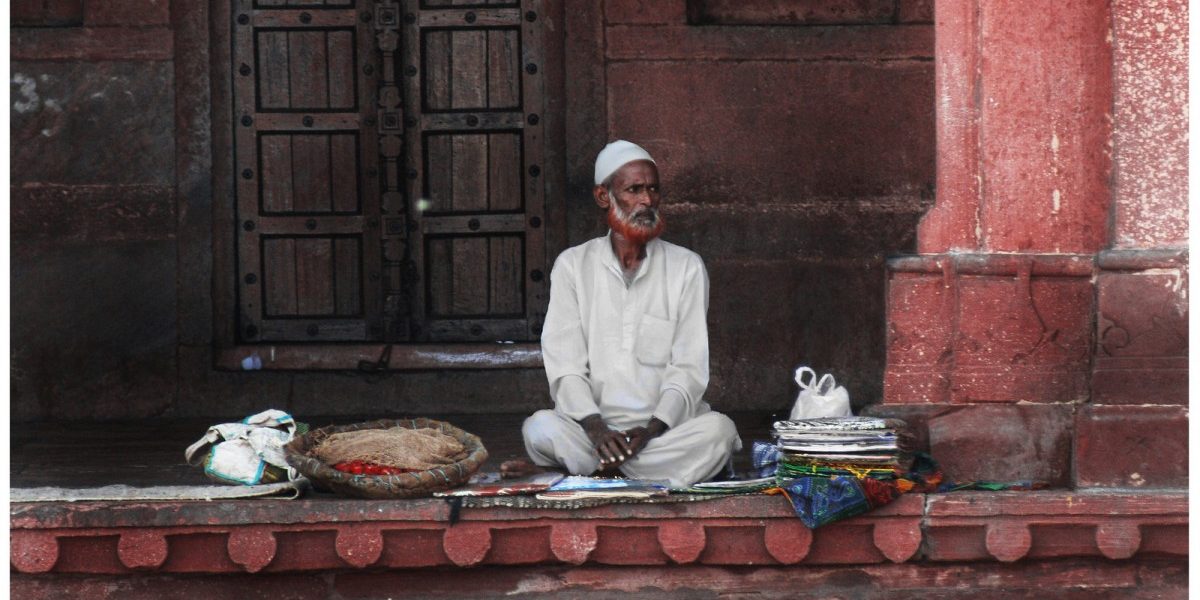 Mumbai: For years, researchers and academics have studied how wealth and income inequality in India is, more often than not, split along caste lines, with upper castes cornering a larger piece of the pie.

However, the measure of their enrichment and the consequent impoverishment and exclusion of Muslim Dalits and Hindu Dalits has received less attention. A recent research article that estimates poverty, wealth inequality and financial inclusion at the sub-caste level in Uttar Pradesh shows that consumption expenditure for Hindu Dalits and Dalit Muslims is lowest compared to other sub-castes.

In the same vein, it is Muslim OBCs and Muslim Dalits followed by Hindu Dalits (Paasi and Chamar) that are the most common landless households in UP. Lastly, both the categories also register one of the highest poverty levels.

The research article, titled “Poverty, wealth inequality and financial inclusion among castes in Hindu and Muslim communities in Uttar Pradesh, India”, is authored by Chhavi Tiwari of the Institut National d’études Démographiques (INED), Paris; Srinivas Goli, a Australia–India Institute NGN Scholar; Mohammad Zahid Siddiqui of the Centre for the Study of Regional Development under JNU; and Pradeep S. Salve of the International Institute for Population Sciences.

The study uses data from a unique primary survey collected by the Giri Institute of Development Studies (GIDS) to assess the social and educational Status of OBCs and Dalit Muslims in Uttar Pradesh during 2014–2015.

It has broadly categorised the economic and social status of a household into four broad domains, that is, deprivation of lifestyle, historical deprivation, household condition and wealth and deprivation in financial inclusion.

Deprivation in lifestyle: poverty and expenditure 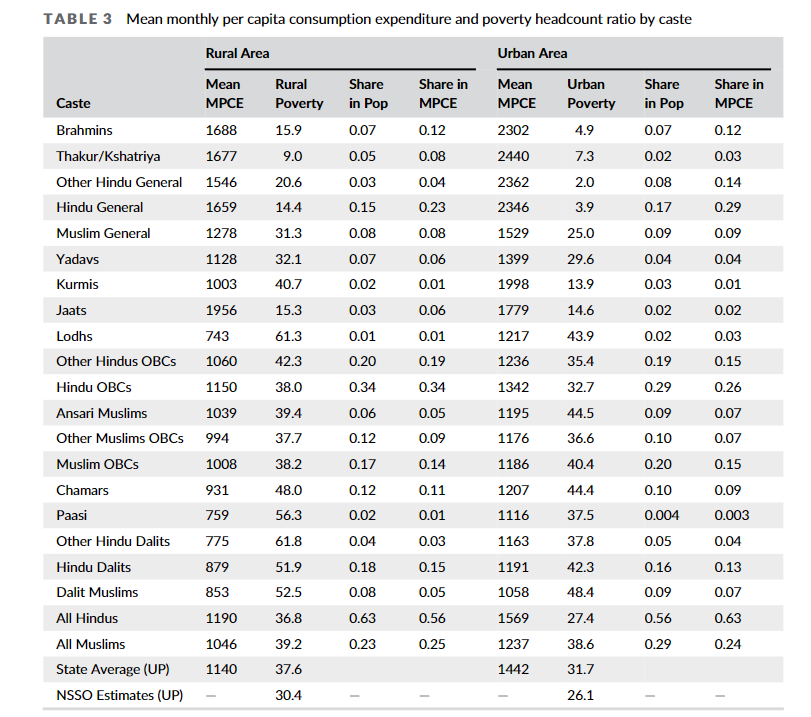 The study also highlights how caste-based social stratification continues to undergird poverty levels in India. The study provides estimates of rural poverty on a caste basis:

Cultivable or non-cultivable land ownership plays an important role in terms of propagating wealth inequality. Dominant land-owning agricultural castes hold key positions in society using their economic, political, and social capital. Further dominance in politics continues the cycle of wealth accumulation. This becomes even more complex in the case of a village (rural) economy where access and ownership of land are the primary means and instruments of economic position and power relations between different sub-caste groups. 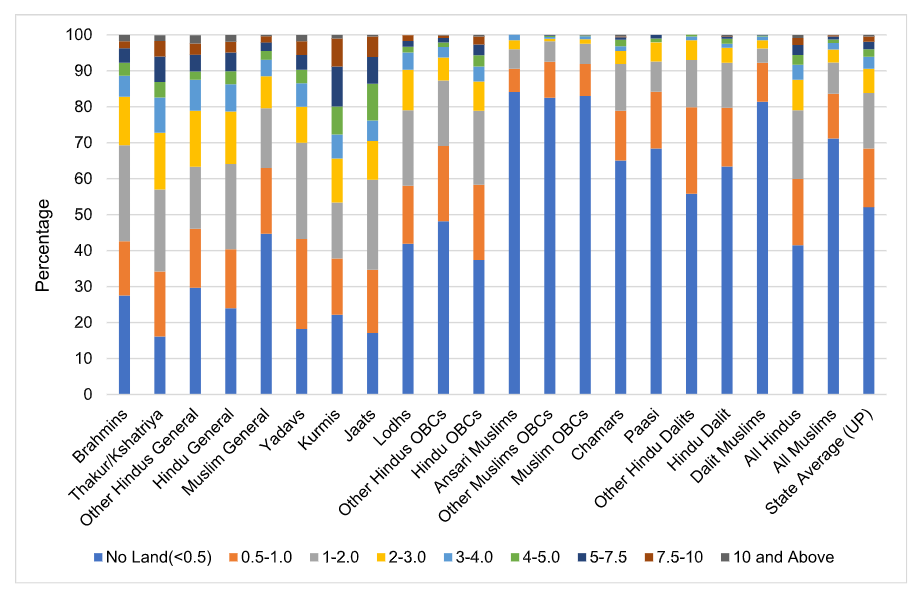 The results thrown up by the study vis-a-vis the ownership of cultivable lands by sub-caste painted a dismal picture.

Other Hindu castes (6%), Yadav (13%), Kurmis (4%) and Jaats (8%); however, the corresponding sampled population proportion is 7%, 10%, 4%, 10%, 3% and 5%, respectively. This indicates a large disparity within the Hindu OBCs category versus Hindu Dalits. Muslim OBCs and Dalits owned about 25% of the cultivable land as the rest of the sampled population.

India has been facing the issue of a graded caste system which perpetuates the historical disparity in access and accumulation of resources. Wealth inequality has been relatively less explored in the context of the caste hierarchy. The study examines the household wealth status among the different sub-caste groups using asset value information self-reported by respondents excluding agricultural land. 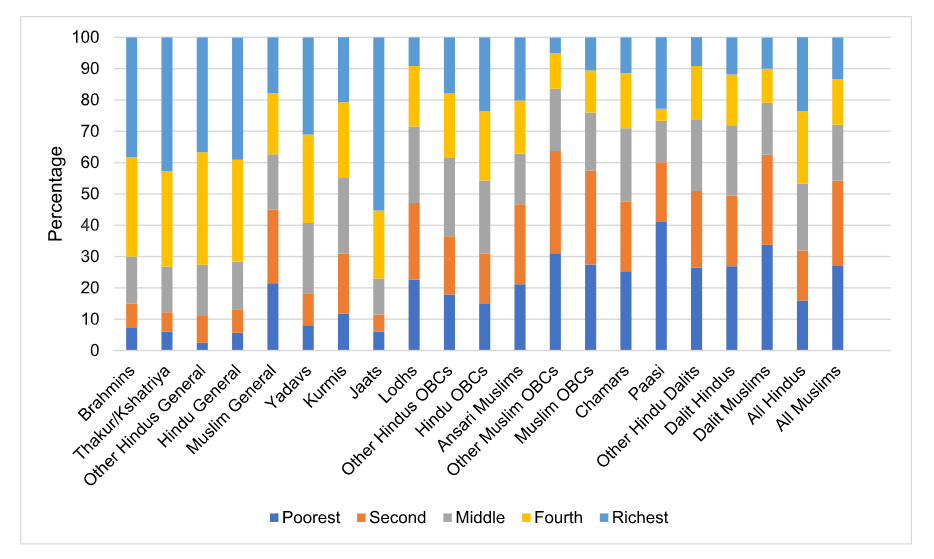 Economic status of the households by caste.

The results throw up some interesting findings:

Levels of debt and financial inclusion

In the survey used in the study, households were first asked whether they took a loan or not in the past 3 years. Second, the reason for the borrowing, and the third is the source of the borrowing. This allows the researchers to construct direct measures of indebtedness and credit constraints of the households due to their caste status.

According to the study, in contrast to the household wealth status, the proportion of households who took a loan during the last 3 years is highest among Jaats (43%), Thakurs, Kurmis, Chamars, Paasi, and Brahmins.

Socioeconomically suppressed castes like Paasi and Chamars were taking loans for health reasons, for marriage ceremonies and for meeting family obligations. The highest loan levels for education are seen in the Other Hindu General, followed by Lodhs and Chamars castes.

The socioeconomic position plays a pivotal role to determine the sources of the loans. The socioeconomically lower castes were mostly getting loans from friends, relatives, and local money lenders. For instance, according to the survey results, more than two-thirds of Ansari Muslims have taken a loan from their friends/relatives followed by Other Hindu Dalits (57.1%), Paasi (48.2%), Kurmis (48%), and Other Muslim OBCs (44.5%). Lodhs, O