There are still two choices available. Admit that India is in dire need of serious monetary and fiscal recalibration or to brazen it through and leave things in an ‘as-is’ state. 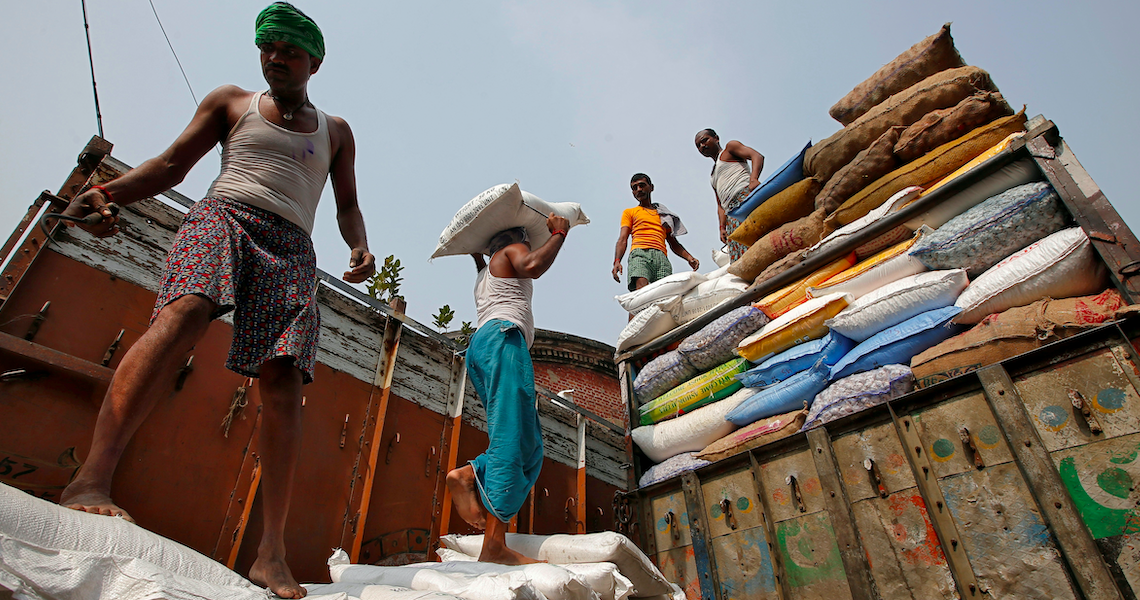 The time after COVID-19 saw a lopsided but partially recovered economy. The next few months will reveal what we are left with post Ukraine and the price we may have to pay for our denial. Photo: Reuters

It’s a popular quote on investing by the legendary investor Warren Buffett – almost tactless and crass – “Only when the tide goes out do you discover who’s been swimming naked.” Here we are, a few months into 2022. Let’s look at what has washed up on India’s shores.

The rupee sank to a lifetime low, equity markets are seeing panic selling, there’s a crush amongst foreign institutional investors to pull out money and all growth bets are now off. But wait, there’s more.

From ‘transient’ ‘temporary’ and ‘not a cause of worry’, it seems like India’s retail inflation is set to be exactly that. Crude is in a zone of its own. Sure it’s an overheated and panic-stricken market. But it is now in a price range that oil importing countries are going to find extremely difficult to absorb.

And it is not just the fuel price impact ordinary citizens will have to deal with. Fast-moving consumer goods (FMCG) have gotten costlier and milk prices have been hiked. Other household goods will also get more costly with metals at new highs. Estimates indicate that even if the central government were to cut fuel taxes as they did in November 2021, layered with other rising costs like palm oil, and other commodity prices, average consumer price index inflation for FY’23 could well exceed the marginal propensity to consume or MPC’s upper tolerance limit of 6.0%.

Was this uptick in inflation a recent post – Ukraine phenomenon? No.

Has it been sticky and high for two years now? Yes.

At a time when global inflation was ticking up, did the Reserve Bank of India acknowledge this as a problem in its past few meetings? No.

Next in line, growth. Economic advisers to the government have fumed and fretted at suggestions India’s growth rebound was both precarious and lopsided (what ‘K’? there’s no ‘K’), yet here we are. Recent quarterly figures disappointed not just with the 5.4% growth registered but with the colourless manufacturing figure of just 0.2%.

Some economists have warned of impending stagflation (that deadly cocktail of slow economic growth, high unemployment and rising prices). With overall real GDP remaining almost static through FY’20 and FY’22, it is clear that a large majority of households suffered through the pandemic. As did small businesses, the backbone of India’s economy.

Safe to say things are going to get a lost worse before they get better. ICRA estimates that the current account deficit spikes to 3.2% of GDP, assuming crude at $130 a barrel. They also believe there are now “large downside risks” to an 8% GDP target. 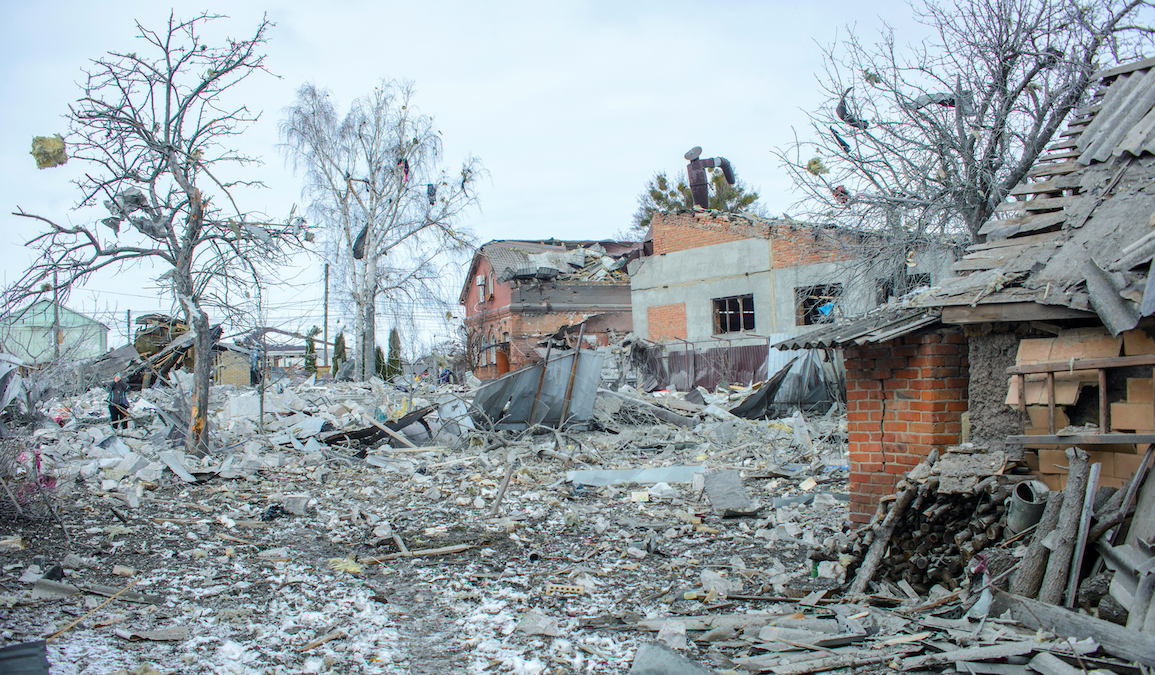 Debris seen next to houses destroyed by shelling, amid Russia’s invasion of Ukraine, in Sumy, Ukraine March 8, 2022 in this picture obtained from social media. Photo: Andrey Mozgovoy/via Reuters

Nomura says the fourth quarter 2021 GDP growth print corroborated their view of a weak underlying growth recovery prior to the third wave. They believe this will be exacerbated by the Russia-Ukraine conflict. India will now have to contend with higher prices and supply-side constraints for edible oils and fertilisers. This, they believe, adds downside risks to their GDP growth outlook (7.0% year-on-year in 2022) and upside risks to inflation (5.9% in 2022).

Also read: Russia-Ukraine: With Both Oil and Rupee on Fire, What Are Modi Govt’s Policy Options?

More dire outcomes. HDFC chief economist Abheek Barua stated that if crude oil prices rule in the range of US $ 82-85 per barrel in the second half of next fiscal, their current GDP growth estimate of 8%-8.2% for 2022-23 might be slashed to 7.8%. If prices remain at around US $ 100 per barrel, then GDP growth forecast might see a further downward revision to 7.3-7.5%.

Added to all this is the system shock of an all-time low for the Indian rupee. On this, the Central Bank probably has some arsenal yet. The RBI may now begin to use its fairly robust reserves to control the pace of the rupee’s depreciation – but its underperformance is already apparent.

The Indian currency has lost about 3.4% year-to-date (YTD) against the dollar (US $) and is the second weakest Asian currency. But this is not a new development either.

In 2021 as well, the Indian rupee was set to end a tumultuous year as Asia’s worst-performing currency. In large part this was due to foreign funds pulling out of the stock market. That outflow has turned into a tsunami in 2022. Domestic funds put up a valiant fight every day, but at this point the figures are grim.

In January 2022, Foreign Portfolio Investors sold $ 4.46 billion of equities. Come February, there was additional selling of $4.71 billion. The first few days of March have been scary – FIIs have sold shares of almost $1 billion for three consecutive days this month. On March 8, they sold an astounding $ 1.05 billion in one trading. Raging oil prices, a newfound zing in the dollar, resultant unwinding of the carry trade and unrelenting stock market outflows have brought the rupee to its perilous state.

A depreciating rupee is yet another ‘damned if they do damned if they don’t’ for the Reserve Bank of India. While a weaker currency supports exports, in the backdrop of a tottering economic recovery and rising the Central Bank may now find it tough to defend its decision to keep interest rates at record lows for much longer.

However, it is the jobs crisis that remains our deepest and most disturbing challenge. CMIE, that remains the only data tool available to track unemployment plots the running unemployment rate for March at 7.8%. Of course states like Rajasthan and Haryana are clocking a terrifying 30% plus tick, but this is not new news.

Why is recounting this important?

A starting point for any problem has always been an admission of the problem. On that the government has been steadfast in its denial. Journalists who asked questions about unemployment and poor growth dynamics were chastised. Data that showed the deep chasm building between economic classes was dismissed. And the narrative on growth has been flabbergasting.

Our most recent Economic Survey said India was set to become the world’s fastest-growing major economy with GDP growth of 9.2% in the current financial year and projected to remain in the range of 8-8.5% in 2022-23. In fact Sanjeev Sanyal, principal author of the piece underlined his belief with this comment: “Even going by the most conservative estimates, will be the world’s fastest-growing economy.”

A resident from the Musahar tola in Uttar Pradesh stands by her kuchha home. Photo: Ajoy Ashirwad Mahaprashasta/ The Wire.

In her Budget speech, the Finance Minister pointed to a virtuous cycle of investment that is expected to revive on account of capex (capital expenditure) and crowd in private investment. She was confident, she said of 9.2% in the current financial year. A large part of that speech focused on, in her words, laying down the foundation to steer the economic developments for the next 25 years. One wonders if the minister would have been better advised to focus on the coming 12 months and preparing for a visible rise in inflation, unemployment and large spread economic distress.

Like a band-aid that has been ripped off, the Ukraine crisis has laid bare all that the Indian economic landscape has been struggling with for many quarters now. This is not an indictment, more a statement of fact. There are still two choices available. To take it on the chin, admit that India is in dire need of serious monetary and fiscal recalibration and start working on it. Or, to brazen it through and leave things in an ‘as -is’ state.

The time after COVID-19 saw a lopsided but partially recovered economy. The next few months will reveal what we are left with post-Ukraine and the price we may have to pay for our denial.