India has historically had trouble in implementing macro-solutions at local levels. The work of Banerjee, Duflo and Kramer speaks directly to that. 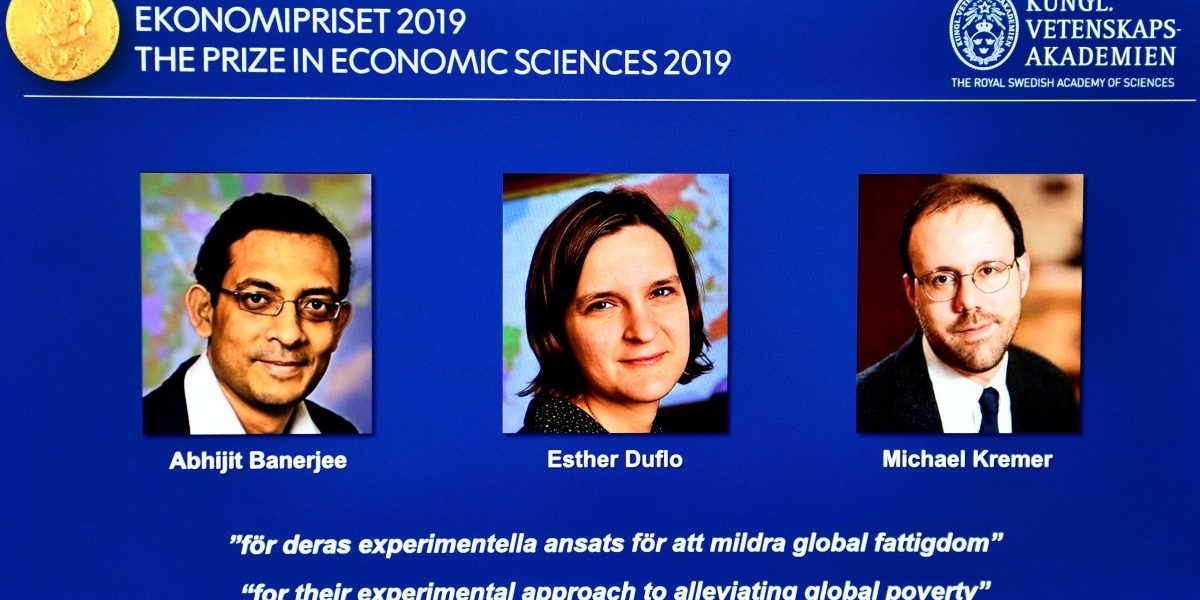 The portraits of Abhijit Banerjee, Esther Duflo, and Michael Kreme, who have been announced the Nobel Prize in Economic Sciences 2019 winners, are seen at a news conference at the Royal Swedish Academy of Sciences in Stockholm, Sweden, October 14, 2019. Photo: Karin Wesslen/TT News Agency/via Reuters

The Nobel prize in economics for 2019 was jointly awarded to Abhijeet Banerjee, Esther Duflo and Michael Kremer.

“This year’s Laureates have introduced a new approach to obtaining reliable answers about the best ways to fight global poverty. In brief, it involves dividing this issue into smaller, more manageable, questions – for example, the most effective interventions for improving educational outcomes or child health. They have shown that these smaller, more precise, questions are often best answered via carefully designed experiments among the people who are most affected.”

Quite aptly, the awarding committee recognises the importance of how these economists have deconstructed the often-unmanageable concept of ‘poverty’ into “smaller, more manageable (practical) questions” through “carefully designed experiments among the people who are most affected”.

While Kremer’s contribution initiated some of these aspects with his experiments on field-design during his work on schooling in Kenya, Duflo and Banerjee helped expand this micro-experimental design to many more countries.

In fact, most of the development economics research today – including in the most established academic journals  – dominantly feature the randomised control trial (RCT) methodological approach as a standard tool for development analysis.

There are significant lessons that this particular Nobel prize offers not only for young economists, but also for other social scientists.

Firstly, Banerjee and Duflo’s work on poverty in the 1990s developed strong, intuitive designs of methodological experimentation which debunked a lot of myths passed through neo-classical or mainstream economic frameworks.

While existing mainstream economic-theories could point at the value of applying certain incentives, surfacing in the form of homogenised solutions, they could not tell us how powerful these are in practice. They could also not tell us in what context may such incentives work or not, even if the underlying mathematics adds up.

It is the latter aspect aspect that Duflo, Banerjee and Kremer’s work expounds upon through enhanced micro-level testing of concerned groups while pushing the benchmarked assumptions of traditional theory.

Theoretical nuances, while providing broad value, rarely tend to offer insights on practical policy questions. For example, is hiring ad-hoc university lecturers a good way of raising the quality of education, even if it makes sense  from a cost-benefit perspective?

Similarly, what kind of microfinance programmes really work? And under what set of policy conditions, which may require context-specific scrutiny?

In the case of subsidising healthcare services or giving sops to certain industries, there are scenarios under which such ‘subsidies’ may economically work only for a short period and may otherwise lead to issue of moral-hazard and dependence.

Each of these questions and concerns have been empirically tested and brought out by Banerjee, Duflo and Kremer and those working with them in recent years. This allowed a methodological movement of sorts, which led to redefining the scope and nature of development economics both in and after the mid-1990s.

In simpler words, their own work made ‘practice’ shape ‘theory’ in economic thinking and analysis – rather than the other way round.

Secondly, this year’s Nobel, similar to the 2015 prize awarded to Angus Deaton, is vital for the importance it attaches to micro-economic analysis in development studies and for its attached policy value.

Most policy-economists and advisers to the government in India today are trained in the area of macroeconomics, which sometimes makes it difficult to intuitively interpret the practical difficulties that might ensue while implementing macro solutions at local levels.

Also read | From Notebandi to Statistics, Nobel Laureates Banerjee, Duflo Have Been Critical of Modi Govt

A moderating balance, in the intuitive value and applications of both micro and macro analysis, can make a substantive difference in addressing issues of social, economic importance across varied contexts. This is especially pertinent for inter-sectional issues of systemic poverty and inequality, or in answering questions such as: what explains the enormous difference in per-capita income across countries? The 41-page scientific explainer to this year’s Nobel prize discusses some of these aspects in great detail.

Thirdly, one lesson which may be of particular significance to academic scholars and young economists today is the value drawn from the collaborative nature of academic research. As the note here explains: Banerjee and Duflo, often together with Kremer or other researchers, broadened and expanded the set of topics, and articulated to the research community how pieces from such microeconomic studies can help us get closer to solving the broad development puzzle. All three Nobel laureates expanded the experimental approach to basically all branches of the field.

An armchair, exclusivist approach to social science research and academic scholarship is counter-productive and tends to have major ramifications on policy design as well. Constant collaborative engagement with different stakeholders helps provide a mutually-reinforcing feedback loop of sorts to conduct, design and develop research methods for those considered. And this is something which each of the laureates have always emphasised on – in conversations and through their work. Similarly, the process of constant experimentation can best happen under such collaborative environments.

For the nature of chronic developmental challenges countries like India are facing today, a closer review and assessment of the laureates’ scholarship and contributions in the areas of health, education and social services is critical for allowing practical insights to shape theory.