While India's economy grows, gender inequality is a problem that needs to be addressed immediately, data shows. 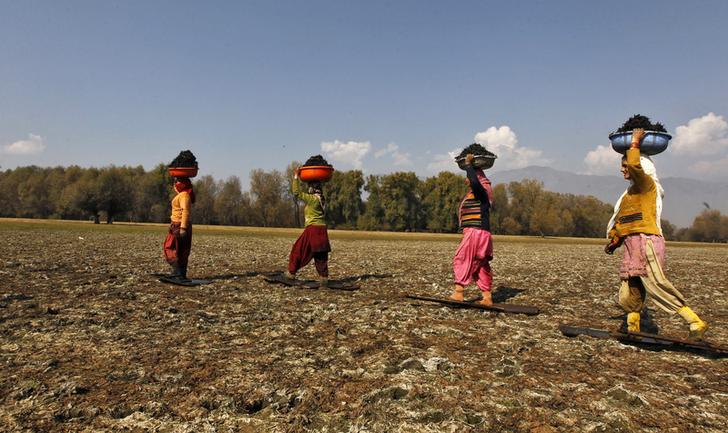 Kashmiri village women carry baskets filled with water chestnuts after collecting them from the waters of Wular Lake as they walk over the marshy land while wearing wooden boards on foot at Bandipora, about 65 km (40 miles) north of Srinagar, November 5, 2012. Water chestnuts are locally known as "Singada" and are eaten raw, boiled or are grounded into flour after they are dried. Picture taken November 5, 2012. Credit: Reuters/Danish Ismail

“We can have data without information but we cannot have information without data,” Daniel Keys Moran once said. For creating effective public policy, states need to spend a significant amount of time extracting empirical data on the social and economic status of its people. India’s growth performance in recent years suffers from a peculiar socio-economic problem that defies the conventional wisdom addressing distributive benefits of higher economic growth. As the rate of aggregate growth over the last decade has significantly risen across the country, relational inequalities surfacing from traditionally-established social hierarchies have further proliferated. The charts below highlight the magnitude of gender inequality in India, based on various indicators.

In terms of the overall working age population ratio, there is a higher percentage of women than men. This presents a greater opportunity for growth-related benefits, by creating more jobs for women (aged 15-64) across all sectors. However, relational inequalities in facilitating access to opportunities, including basic economic facilities and protective social security, make it extremely difficult for women to gain access to higher-income opportunities.

Over the last few decades, with multiple state-led child education programmes targeting school enrolment levels, the enrolment rate for females have gone up in the primary schooling system, supplemented with a drop in the child dropout ratio for girls. This has been seen as the effect of efforts made by both state and non-state actors.

However, the challenge over the last decade has been to substantially increase the female enrolment rate in secondary and tertiary education, where one can observe a significant gender divide, affecting the overall female literacy rates.

The low enrolment of females in secondary and tertiary education culminates in low bachelor-level undergraduate education attainment (aged 25+) for females, significantly affecting their ability to find employment in the organised sector.

If we observe trends in healthcare indicators like mortality rates, adolescent fertility rate, life expectancy for females and so on,  the overall situation for females continues to get worse across India. A poorly-financed healthcare system accompanied by a limited social security coverage system makes it extremely difficult to finance rising out-of-pocket expenditure, particularly for women.

The lag in women’s access to basic social opportunities presents an enormous challenges for women when it comes to being absorbed by a highly-fragmented organised sector, thereby forcing most women to work in the unorganised, informal sector. In addition, youth unemployment rate for females (ages 12-24) too has considerably gone up over the last decade.

The continuous drop in the overall female labour force participation rate reflects a macro employment policy failure. It is important to mention here that most women working in the self-employed or unpaid household employment category are inadequately captured by indicators measuring labour productivity. This raises fundamental questions on a gendered understanding of what we define as “work”, which in traditional economic measurement indices include only the monetised aspects of work as employment.

Another interesting observation one can find in the World Bank data on gender-wise access to financial and mobile accounts in India is a low female-male ratio in accessing basic financial services.

The relational inequality seems to be the case in spite of a higher rate of growth seen across these services (like in banking and telecommunication) after the 1990s, warranting a deeper research into the causal factors.

In accounting for gender-based violence or crimes against women, a number of recent studies document the increasing violence (or increasing reporting of such violence) faced by women across India.

The indicator above attempts to account for cross-country sampled responses of married women across India to gauge the extent to which married women find physical violence from their husband justifiable, and under what circumstance. More than 45% of the women believe that a husband is “justified in beating his wife for either a) neglecting the children, b) refusal to sex with him, c) going out without his permission, d) burning the food, e) as a result of verbal argument with him”.

Tackling a deep, socially-embedded problem like gender inequality requires coordinated social policy and long-term measures from any developing state. Apart from the need to closely study the patterns emerging from the data highlighted here, there is an urgent need for the Indian state and non-state actors (via greater awareness and education) to address intra and extra-household gender inequality, measurable here through the distributional patterns of economic and social resources between women and men. Prioritising the need to address gender inequality remains a critical developmental issue for the state and its citizens.