The traders have incurred a loss of over Rs 5000 crore in the last 22 days, while 15 lakh labourers have lost their jobs due to the shutdown. 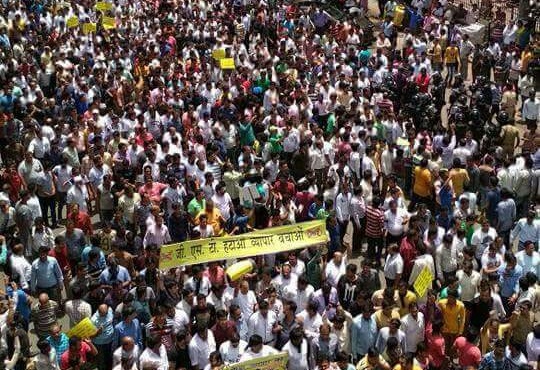 Surat: On July 8, Surat, the economic capital of Gujarat, witnessed an unprecedented protest against the new tax regime, the Goods and Service Tax (GST). Texile traders swarmed a three-km stretch on the Ring Road, which holds city’s main textile market, on a silent march, as their strike entered its 23rd day.

The mammoth rally, in which organisers claimed more than one lakh people participated, was organised under the leadership of Hitesh Sanklecha, a textile trader who has been on an indefinite hunger strike for the last nine days.

The Surat textile industry produces about four crore meters of fabric in the dyeing and textile mills in Pandesera, Sachin and Palsana areas every day, with a net worth of about Rs 150 crores. Over the last 22 days of strike, traders have incurred losses amounting to over Rs 5000 crore. 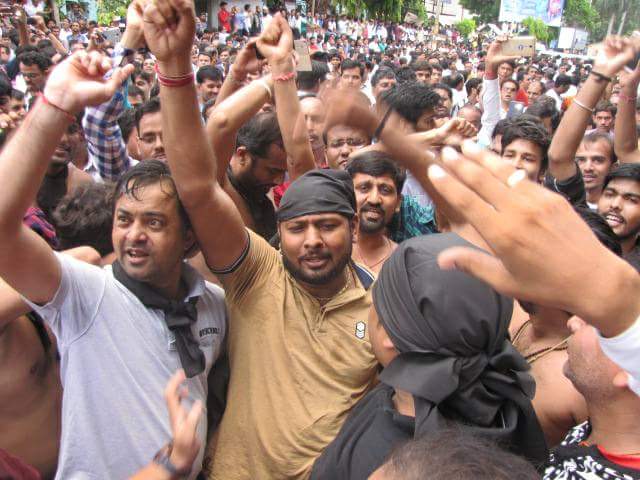 “It is not just the mill owners, textile traders at every level have incurred losses. Sales went down the day government announced that a new tax regime will be implemented. In fact, the products we shipped to whole sellers were returned, as nobody knew how the old stock would be priced,” said Champalal Bothra, a textile trader from Surat and secretary of GST Sangharsh Samiti, the newly floated organisation under whose banner the protests are being carried out.

Tarachand Kasat, the president of GST Sangharsh Samiti is also the executive member of the BJP’s Surat cell, and has been associated with the party for over 30 years now. Champalal Bothra, secretary of the organisation, holds the post of vice president in Surat city Congress and is general secretary in the state Congress economic cell. Jaylal Lalwani, the spokesperson of GST Sangharsh Samiti, is associated with the Aam Aadmi Party.

“After the declaration that a new tax regime would be implemented, we have met Gujarat chief minister Vijay Rupani, Subramanian Swamy and minister of textile Smriti Irani, but in vain. Later, we met finance minister Arun Jaitley, and he assured us that he would bring up the issue in the meeting of the GST council. But when we got no response from the government, we decided to take our fight to the street. The organisation has been formed to fight the issue and once it is resolved the organisation shall be dissolved as well,” said Bothra.

No one from Surat’s textile sector, the country’s largest market for manmade fabric, wants to be under the GST tax regime, the GST Sangharsh Samiti said. 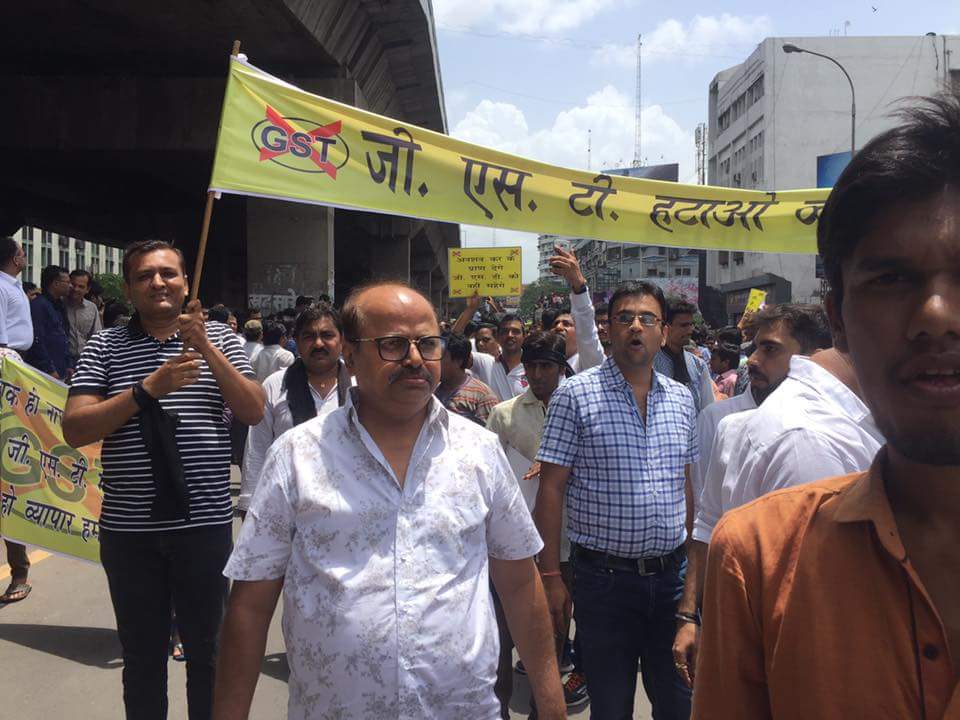 “Small traders will die. They had hardly come out of effect of demonetisation that GST has been slapped on their face. Most small time traders are either illiterate or computer illiterate. For businessmen whose transactions are not in lakhs and crores and who deal with unorganised sector, GST has disrupted their chain of business. Hiring a chartered accountant will increase the cost of running the business by lakhs,” said Rizwan Usmani, a textile trader from Surat.

“There are small-time traders who cannot afford to shut down their businesses for so long yet they refuse to budge and back off from the protest. Many such traders have no money now to run their households. The GST Sangharsh Samiti has decided to distribute food kits to such traders that will contain 5 kilograms of wheat flour and other basic food items,” Bothra said.

Meanwhile, as 75,000 textile traders of Surat continue their indefinite strike, about 15 lakh labourers involved in the have been rendered jobless.

“They are daily wage earners who have not got any money for 23 days now. Many of them are migrants from states like Bihar, Uttar Pradesh and Odisha, and are now going back to their home states,” said Suresh Sonawne, leader of Rashtriya Mazdoor Sena, a trade union body of labourers working in Surat textile sector.

“I don’t even have Rs 100 with me right now. How do I feed my family? We have to return to our village but I don’t have the money to get tickets,” said Jivan, one of the many jobless labourers who want to work but do have a job anymore. “I am trying to arrange money so that we can return to our village in Bihar,” he said.

Of the 15 lakh labourers rendered jobless, about five lakh are women, who are part of the unorganised sector that has developed around the main business. “A huge cottage industry as developed around the main textile industry that involves women who do the stitch art work and embroidery etc on the finished fabric. They are part of the unorganised sector and form a very important part of textile industry. But the government did not care to consider them while slapping GST,” said Usmani.

These women from the unorganised sector are likely to join the protest in large numbers from July 11, said a core member of the GST Sangharsh Samiti.

However, the protest took a new turn on July 3 when police lathicharged on the traders, injuring about five. Avatar Singh, a textile trader and former president of FOSTTA, was reportedly pushed from the stairs of a building where the traders had gathered during the protest. 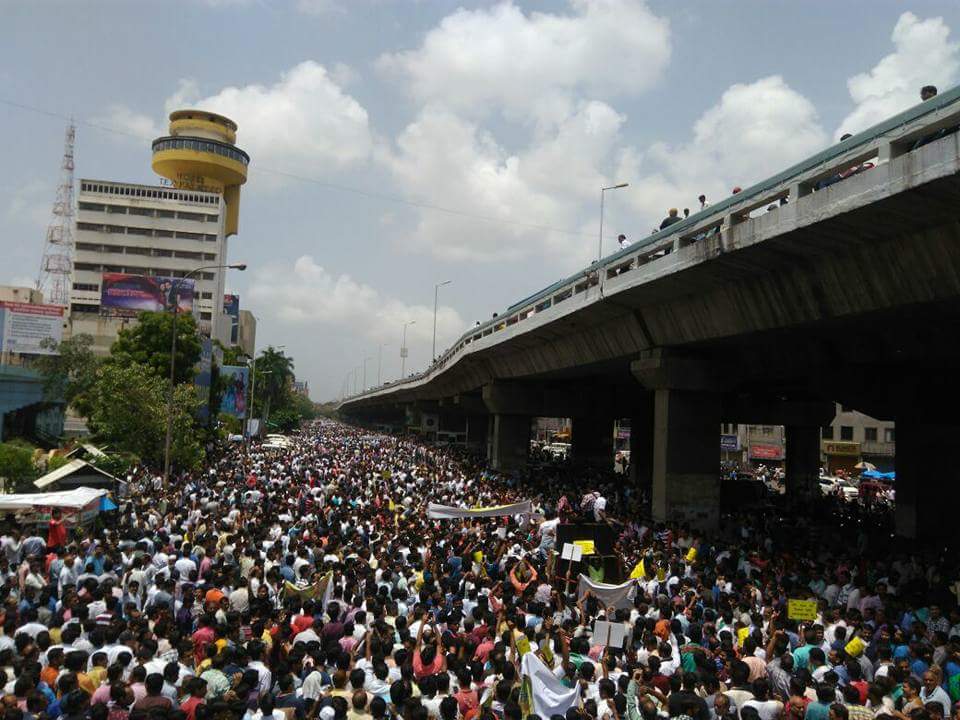 “We were standing peacefully in front of our closed shops when the police came and forcefully tried to open the shops. They hit the watchmen first. Some traders opposed that and the police lathicharged on them. I was standing at a distance when some police personnel gheraoed me and tied a piece of cloth on my face and started beating me. Eight or nine policemen kept beating me till some traders came to the rescue. I have four stitches on my head and injuries on my hands, legs and back,” said 23-year-old Danny Dave, the son of a textile trader and who helps in his family business.

The incident infuriated the traders and 75,000 traders and brokers, who are members of BJP, threatened to quit the party if strict action was not taken against the concerned police personnel.

Later, Tarachand Kasat had told the media, “The lathi charge on traders is unacceptable. We are protesting peacefully and want the government to rethink the 5% GST on textile trading.”

“Why does the government have to impose GST at every stage of making the fabric? The GST can be imposed at the yarn and the slab may be increased while keeping the entire lower chain free,” he added.

Meanwhile, Union minister Mansukh Mandaviya met the protesting traders on July 7, as the meeting of the traders with BJP party president Amit Shah was called off.

“Mandaviya has clearly stated that GST shall not be taken back and that we should find a middle ground,” said Bothra.

Under these circumstances, the traders have decided that the movement will only intensify.