Saving the Economy from Development

Modern wisdom views economy as a “machine” that churns out money and sees anything that slows down its performance as friction that needs to be reduced and eliminated. 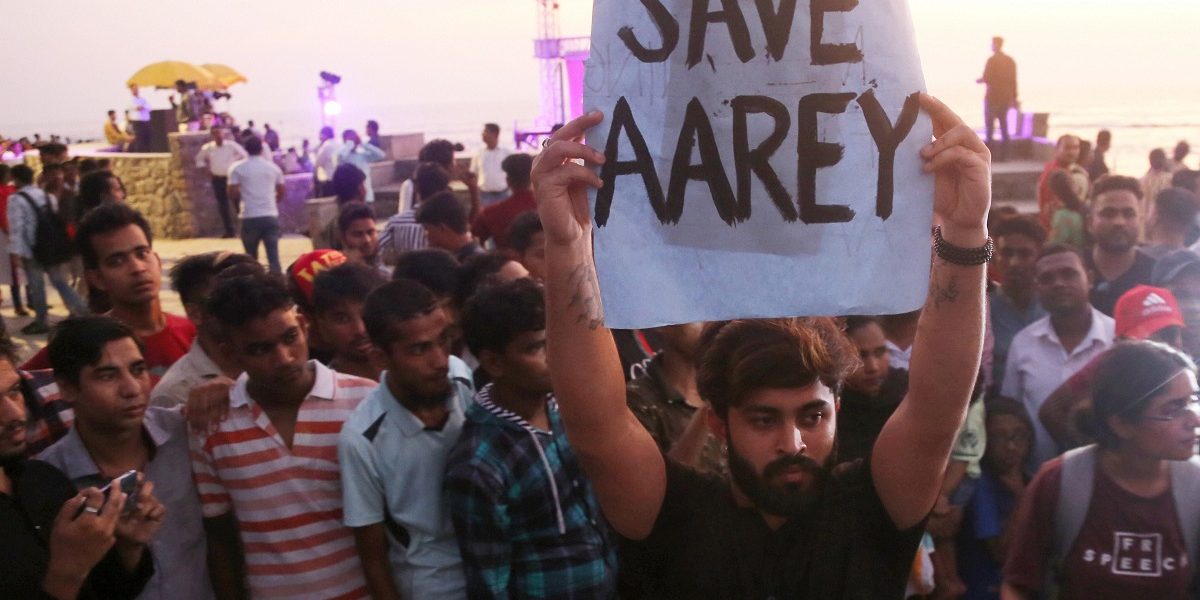 An activist holds a placard during a protest against cutting down of trees for a proposed metro car shed project at Aarey Colony in Mumbai, Sunday, October 6, 2019. Photo: PTI Photo (PTI10_6_2019_000236B)

The recent protest by people to protect the Aarey forest in Mumbai is yet another sign of growing discontent with the model of development pursued by the Central government.

The model of development that informs the economic vision of the government is derived from the economic logic that disengages the economy from its societal and ecological connections.

Modern wisdom views economy as a “machine” that churns out money and sees anything that slows down its performance as friction that needs to be reduced and eliminated.

This insular view of the economy as a machine is what drives the maniacal obsession with GDP growth – for example, the obsession with the $ 5 trillion economy or the “super power” economy, and so on. Such a limited view is based on the patriarchal obsession with the display of medals, and blinds us from seeing an adverse impact on the very people who are the supposed beneficiaries of development.

In the recent history of Indian economic development, we have seen a large-scale impact of “development” on ordinary people in terms of dispossession, of both land and their rights. While people do come out to protest economic policies that hurt their livelihoods, there is a significant difference this time around, in the string of recent protests across India.

Apart from people’s concern about the impact of “development” on their lives and livelihood, another issue that is quite fundamental, which was unexpressed before, has been on the forefront – our relationship with nature.

In India we have an emotional and spiritual connection with nature. We have never articulated our relationship with nature in written commitments or contracts, but we have expressed it in spiritual terms all over India.

For thousands of years, people have worshipped nature. From etching inscriptions of Ganesha idols on the branches of banyan trees to worshipping mountains and rivers as sacred, people have internalised the unwritten commitment to nature for generations. Notwithstanding the obvious criticism of people being driven by beliefs that their Gods live in trees and rivers, the spiritual connection with nature informed their views of the economy on which their livelihood rested.

In a sense, our ancestors had a holistic view of the economy, embedded in the wider society and integrated with nature.

It is this connection which is being dismantled by the modern economic logic that has culled out economy from both its foundational pillars, namely, society and nature.

The recent mass protests, be it over culling the Aarey forest at Mumbai in Maharastra, or stopping the hydrocarbon plant in Neduvasal in Tamil Nadu, highlight the realisation in common people’s minds that current development policies are adversely impacting their unspoken and unwritten spiritual connection with nature.

While the spiritual connection with nature is not easily expressed in material sense, common people’s discontent is expressed in more tangible ways. Their livelihood, ironically, becomes the focal point for the politics of economic development.

It is in this background that one must situate the current global and national environmental and ecological movements that strive for intergenerational justice and grassroots mass movements inspired by Gandhian thought.

The recent satyagraha by the Gram Seva Sangh in the Gandhi Bhavan in Bengaluru showcases the commitment of ordinary people to protect our environment by reimagining and reinvigorating the forgotten concept of the sacred economy.

The weeklong fast by Prasanna, the well-known artist and Gandhian, highlighted the pain and suffering inflicted on weavers, carpenters, informal sector workers through the loss of livelihood caused by economic policies such as demonetisation and the hurried implementation of GST. These are derived from a view that sees the economy as a machine that has no relation to society and ecology.

Prasanna’s fast focused attention was on how one can resist the lure of the predatory practices in our economic decisions that we have accepted as rational behaviour. The satyagraha asks for critical engagement, debate and discussion, and suggests a direction to get out of this vicious cycle of greed led growth and destruction.

We are at cross roads.

Instead of giving in to the modes of thinking that provides some sort of comfort zone, we need to critically engage with our actions that impact not just our generation but also the future generations. At the most basic level, we need to step back and look at the economic logic that has driven us into this perilous path.

What we need is a sensible rethinking of economics and the process of development that views the economy, society and ecology in an integrated way. While there is always an urge to integrate ecological considerations in the standard economic problem, what is more meaningful and impactful would be to view the economy through the “lens” of ecology.

Instead of thinking that the size of the pie is what matters for development, like “only by becoming a $ 5-trillion economy will we achieve developmental goals,” if we integrated ecological considerations as constraints to our objectives, then growth can become more inclusive and sustainable. It is only then that we can recover and resurrect our ancestral commitment to nature, and it is this desperate need to save the economy from the developmental imperatives dictated by money and status that has given rise to both global and local grass root level environmental movements, including that of Prasanna’s Sacred Economy movement.

Srinivas Raghavendra teaches at the School of Business and Economics at the National University of Ireland, Galway in Ireland. Vinod Vyasulu is the president of the Centre for Budget and Policy Studies in Bengaluru.