Russia-Ukraine: How will Indian Markets Deal with a War?

While the Centre doesn’t have a clear role in so much as a correction is concerned, it is now faced with the effects of a commodity price surge, global instability, sharp foreign investor outflows and rattled domestic sentiment. 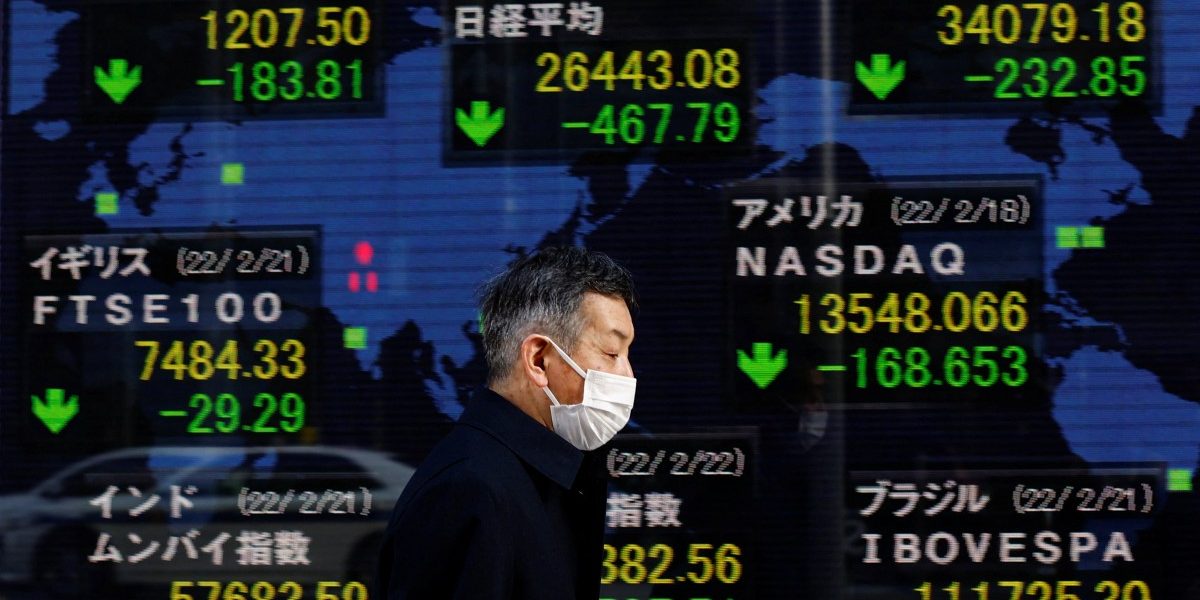 Two months into the year find financial markets in a tricky space. After negotiating the uncertainty and jagged nature of a post-COVID economic recovery, global markets now find themselves staring at the possibility of a full-blown war. The Russian military is carrying out airstrikes on Ukrainian military compounds, leaving a large part of the Western world tense and polarised. And crude has surged to triple digits.

Here in India, when taking a broader perspective, the quantum of the cuts for key indices is still not savage. Outperformers like IT have been punished hard (the Nifty IT Index has lost more than 15%) and the broader market is feeling bruised (Midcap Index down almost 10%).

As a jumpy market flits nervously from Ukraine to COVID recovery and also to a hawkish US Federal Reserve (Fed), three things have emerged clearly.

Year to date, foreign investors have pulled out over Rs 53,000 crore from equities. To be fair, it is equally noteworthy that domestic money has tried hard to absorb that system shock; domestic institutions have bought approximately Rs 40,750 crore into the markets so far.

A smooth and often profitable run for SIPs so far will now face a dual test. Fresh money needs to keep coming into the market via SIPs and other instruments, but it also remains to be seen whether there can be a huge growth in the number of retail investors flocking to the stock market. Household incomes and savings are under pressure, retail inflation is ticking higher and Crypto remains a far bigger favourite for younger India than equities.

There’s also a degree of relentless pummelling here. In 2020, overseas investors closed the year with an inflow of a modest Rs 26,000 crore; down 84% from the Rs 1,70,260 crore they invested the previous year. To jog our memories, it was the worst inflow – quantum-wise – since calendar year 2018. This year, of course, we’re off to a roiling start with over Rs 50,000 crores offloaded.

Many things are going into the global blender at this point. March may bring the “lift-off” everyone’s expecting from the Fed. In fact, minutes from its meeting suggest it may even be open to tightening monetary policy more quickly than expected if US inflation doesn’t ease off. That places a big question mark on future inflows and the step-in-step edginess of global markets that has been on display over the last few weeks.

India may suffer more than others simply because it outran many markets on gains and valuations. The benchmark BSE Sensex rose over 20% on a year-to-date basis till December last year; the BSE Midcap was up almost 40% and the BSE Small cap index had a spectacular 60% run.

Added to all of that is the ongoing geopolitical tension around Ukraine. While there are tenuous links to draw between financial markets and geopolitical strife, what markets need less off is uncertainty. At this point, however, it is piling on in heaps.

Also read: Explained: What the Fed’s Inevitable Rate Hike Means for India and the Global Macroeconomy

Commodities and their sting

A $100/barrel mark on crude is here and all signals point to the commodity crossing those levels, if tensions escalate further and for longer between Russia and Ukraine.

Paul Hickin, director, S&P Global Platts writes about how the global economy can withstand a short-lived price spike, but a spike with a higher peak and longer duration does much greater damage to global oil demand and its recovery to pre-pandemic levels.

There are many ways in which this will play out badly for India. Retail prices will have to be upped, causing greater financial pain for households; the government may have to shell out more in its subsidy pay-outs for fertilisers; and with 80% of our oil needs met by imports, we are both hamstrung for want of options or choices and the Finance Minister now has a higher oil import bill to contend with.

Neither does this equate to a big lottery amongst the listed oil companies. While the ruling government attempts to kick the can down the road, thanks to ongoing state elections, oil marketing companies and refiners are left hamstrung and uncertain about the quantum of losses they may need to grin and swallow.

There is another development that’s slowly but surely building – Nickel has risen to $25,000/tonne; a first since 2011. Copper, now in hot demand for electric vehicles, wind turbines and other green energy initiatives, doesn’t seem to be in any mood to cool it’s rally. Goldman Sachs analysts are calling it “the new oil”. They see prices average $11,000 per metric ton over the next 12 months.

All this means far higher input costs for many frontline companies that were, so far, insulated from any big escalation in costs. Fast-Moving Consumer Goods (FMCG) firms have been candid about subdued demand in rural pockets, and the added pinch of high input costs sullies the earnings pitch for India – not the best background for a market that has been patently overvalued in many pockets and has enjoyed the fruits and attention of that overvaluation for months now.

Of big bets and IPOs

If 2020 was about a ‘big bang market’, 2021 was about an even bigger bang primary market; initial public offerings (IPO) were flowing on tap, valuations were stratospheric and there was a virtual stampede for subscriptions. From that point of milk and honey, things have turned quite quickly. One could debate the timing of this, but as I had written, post the Paytm listing, a sour run for this giant IPO may have been the cataclysmic beginning of the end for the IPO circus.

As the Indian Express collates, at least one in three IPO this financial year since is currently trading below its issue offer price. There’s similar damage across the mid and small cap fields, where stocks have already seen savage cuts of over 20% this year.

In the small cap space, the losses are even deeper. A lot of the froth is moving out of the system. That’s never an easy or painless process. It may also take with it a section of the more risk- loving trading section. What remains to be seen, is whether people will walk away with burnt fingers forever, as many did in the last bear market of 2008-2009, or whether they will come back to trade another day.

Also read: The Winners and the Losers of Union Budget 2022

All regulator hands on deck

The market correction, just like the pandemic, will take its course. Stocks will bleed, prices will be reset and lessons will be learnt. What’s more important from here on, especially in the context of this year, is what our key regulatory authorities choose to do.

Number one; the Reserve Bank, that was either feeling extremely optimistic or extremely misplaced in its reading of the situation. Rising inflation is not going away in a hurry; it is and has been sticky in nature and will likely get worse, given the trends on crude oil and the pass-through we will face on petrol and diesel prices post the election results in March.

By attempting a status-quo on rates, the central bank is creating an atmosphere of uncertainty and confusion. It is, of course, another matter that they have also chosen to disregard the growing and apparent inequality of incomes in India, but let’s leave that discussion for another day.

Number two; after a crash-and-burn run through 2021, there’s still a lot of IPOs set to hit the market. The Life Insurance Corporation (LIC) is the biggest and the first to go, but it will be followed by many others, including Ola, Byju’s and Delhivery. This is the time to set things in order. With respect to pricing and the role of anchor investors and transparency of financials, especially with regards to start-ups.

And finally, the Finance Ministry, that doesn’t have a clear role in so much as a financial market correction is concerned. But it will also be the first time they are faced with the effects of a commodity price surge, global instability, sharp foreign investor outflows and rattled domestic sentiment. It will also need to watch the sharp gyrations on the Crypto market, which as we now know, is taxed but not legitimate. With prices sliding sharply on actively traded coins like Bitcoin, there may well be fire-fighting required on multiple fronts.

The markets have shown their hand. A geo-political crisis is underway. Are India’s regulators ready?