Legislation should aim to optimise regulations to promote good governance in the digital space. Digitalisation of services has been one of the most significant change agents in the past decade, globally.

It is leading socio-economic transformation at grass-root levels, bringing efficiency and accountability, creating new income opportunities, increasing connectivity and driving economic growth. While these developments show the tremendous potential of digital transformation, the recent pandemic has also accentuated the gaps between the haves and the have-nots.

These digital divides have left very large numbers behind in the COVID-induced digital acceleration.

The Indian experience of digitalisation has been truly unique with its own set of challenges. Internet penetration has increased in the past few years. The COVID-19 pandemic further strengthened the pace at which people are opting for digital methods in their daily lives. Almost all the e-commerce marketplace platforms noted an uptick in the seller count.

Digitalisation has largely made the life of a common man easier in India and unlocked new opportunities for him. But the same is not true for the ‘common woman’. The pandemic has further deepened gender inequality. As education compulsorily shifted online in the pandemic, female students suffered a greater brunt with comparably lower access to digital networks than male students, due to varying family attitudes and biases.

It has been reported that only 35% of Indian women have internet access. Up to ten million girls are in danger of dropping out of schools, that could result in early marriages or child labour. Education is the only social security for most girls.

The Indian economy is also bound in the matrix of extreme poverty along with extreme wealth. While India produced 40 more billionaires in the last year, more than 46 million persons slipped into poverty. Income inequality is increasing rapidly and since the accessibility to digital services is still largely restricted to the privileged classes; digitalisation is entrenching poverty instead of reducing it.

As only 3% of India’s poorest 20% households have access to a computer, and 9% have internet connectivity, the difficulties faced by the poor in gaining any benefits emanating from digital infrastructure have only increased multifold. 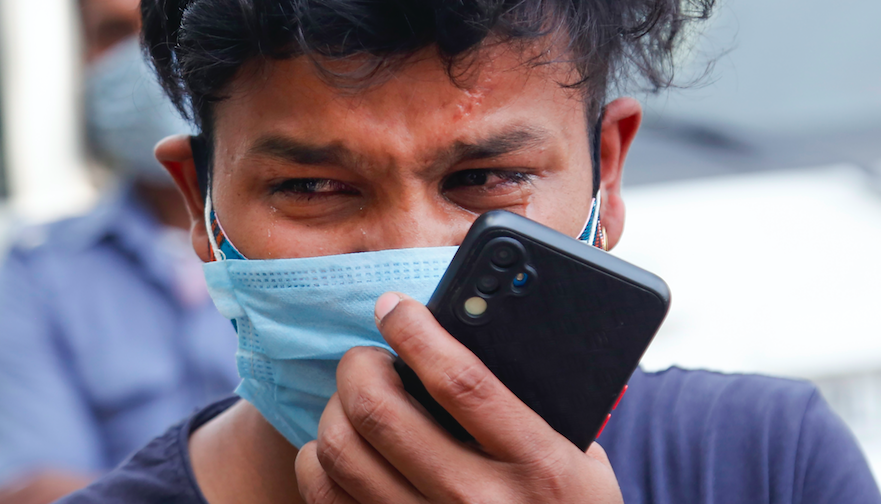 A boy looks at his phone while breaking down amid the ongoing surge in COVID-19 cases, in New Delhi. Photo: PTI

Rural population is still unserved or under-served, creating another layer of digital divide. Due to unreliable electricity, unaffordability, topographical challenges, and the high cost of infrastructure, rural India faces challenges in even securing access to functional internet. The lack of sufficient content in the local language is another barrier for a very large population that is not well-versed in English.

The lack of access to the internet also translates to low digital literacy in India. As per a study, only 20% of Indians have the technical know-how to fully use digital services. In 2016, digital literacy was as low as just 10%, impeding the implementation of welfare schemes in the country.

Digital illiteracy in a highly digital world exposes the population to security and privacy lapses. The Personal Data Protection Bill, (PDP Bill) 2019 has been pending in the Parliament for more than two years.

In the absence of a regulatory framework, issues like privacy infringement, illegal storage of data, and absence of consent arise.

For example, National Digital Health Mission aims to create unique Health IDs of the individuals to facilitate a seamless flow of patients’ medical information across multiple systems. This Health ID was recently integrated with the vaccination appointment slot portal (CoWIN) to maintain a database of the vaccinated population in India. However, no consent was sought and no prior information regarding its use was provided. Without a legislative framework, it is generally feared that data security and safety could be compromised.

As in all public policy, the touchstone of legitimacy must come from the Gandhian principle of helping the poorest: “The true measure of a digitally inclusive infrastructure can be found in how it would treat the most vulnerable members of society”.

The government needs to start at the grassroots to increase the access and affordability of digital services, through PPP where feasible, to ensure reliable internet services even in the remote corners. While the internet holds the key to unlocking the next phase of the economy, many people might not get a  chance to participate in it if they are not properly trained and inducted. Social stigmas need to be eradicated around the use of internet to onboard the female population.

The much-delayed PDP bill has also attracted heavy criticism from sectoral experts. It may have aimed to increase the cybersecurity in India but it would result in a higher compliance burden for the e-commerce companies, it is feared.

Therefore, the legislation should aim to optimise regulations to promote good governance in the digital space.