At Last, RBI’s Accountability Is Being Questioned in Multiple Forums

A Reserve Bank of India (RBI) logo is seen at the entrance gate of its headquarters in Mumbai, India, June 7, 2017. Credit: Reuters

What happens when a regulator digs in its heels and takes advantage of its independence to become unaccountable, non-transparent and capricious in all its roles – such as licensing, regulating, inspecting and supervising banks and finance companies as well as trading in debt and foreign exchange? Things reach a breaking point.

For nearly three decades after India embarked on a massive economic liberalisation programme, the Reserve Bank of India (RBI) has repeatedly failed to detect massive scams and wrongdoing but has never been held accountable.

Weak supervision (from the securities scam of 1992, to IL&FS in 2018), failure to check dubious lending; permitting bad loans to balloon to over Rs 12 lakh crore by expressly permitting various schemes to disguise them, delay repayment or permit fresh borrowing… it’s a long list.

The need for RBI to be independent of political machinations is recognised by all and, hence, it is treated with such deference that its shortcomings and failures in all its other roles have remained largely unquestioned. The Comptroller and Auditor General of India (CAG) does not even audit RBI, while it audits all other regulators.

Interestingly, RBI is facing at least three specific challenges today, when public anger is running high over how the corrupt and collusive nexus between politicians, bureaucrats, bankers and regulators has allowed several dubious industrialists to commit fraud or flee abroad after running up massive debts and transferring funds to tax havens.

RBI is in a long battle with the central information commission (CIC) over its refusal to disclose the names of wilful defaulters. The matter went to the Supreme Court (SC) which ruled against the RBI in 11 cases (clubbed by the SC) way back in November 2015. Stunningly, RBI has continued to defy the SC. Meanwhile, bad loans of public sector banks (PSBs) soared; many required prompt corrective action; wrote off several lakh crores of rupees of irrecoverable debt; and the government has been forced to bail out PSBs through repeated capital infusion at public expense. But nobody has held the ‘independent’ RBI accountable for failure to allow matters to reach a crisis point.

Finally, in 2018, CIC issued a show-cause notice to RBI governor Urjit Patel for dishonouring SC’s orders and failing to reveal the names of defaulters. RBI has challenged this in the Bombay High Court and obtained a stay order which buys it plenty of time. But it does make one wonder why RBI is so determined to hide the names of large defaulters, when banks are permitted to humiliate smaller borrowers by publishing their names and photographs in newspapers?

The National Company Law Appellate Tribunal (NCLAT), which is hearing the bankruptcy petition against the failed Infrastructure Leasing & Financial Services (IL&FS), waded into RBI’s turf on February 25, 2019, by directing banks and financial institutions not to declare the accounts of the IL&FS group as non-performing assets (NPAs) without its permission.

RBI has asked to be impleaded in the proceedings, but it is not going to be a walkover. While admitting the petition, NCLAT reportedly told RBI not to make its decision ‘a prestige issue’. There is no doubt that the rules for recognising stressed assets and provisioning need to be uniformly implemented by a single regulator and NCLAT may have overstepped its brief causing needless confusion. On the other hand, IL&FS’s unchecked, hydra-headed growth and the complex web of 346 companies is entirely a reflection of RBI’s failed inspection and supervision leading to a huge systemic crisis.

If RBI is unable to convince NCLAT, it will have to go to the SC; but it is already facing a similar challenge before the apex court. Power, sugar and shipping companies have challenged in the SC RBI’s directive asking banks to report all defaults that remain unresolved even for a single day beyond the 180-day period. At a time when the nation’s patience is running thin over bad loans of dubious industrialists, it is anyone’s guess whether RBI’s arguments will be heard with the same deference as earlier.

The third and on-going challenge comes from KMB, a regulated entity, which startled the financial world when it decided to sue RBI over the demand to reduce promoter holding to 20% of paid-up capital. KMB has challenged RBI’s powers under the Banking Regulation Act (BR Act) and called its demand ‘manifestly unreasonable, arbitrary, unfair, without the authority of law’ as well as ‘wholly illegal’ and ‘unconstitutional’.

RBI, which took a couple of months to respond, while agreeing to refrain from coercive action against KMB, has come back with a rather weak defence. It argued that KMB had, at various times, agreed to comply with RBI’s demand to reduce promoter shareholding in line with its multiple directions and persuaded it to stretch the compliance deadline; it was now going back on that commitment.

KMB’s petition, however, claims that it has already complied with RBI’s directions through the issue of preference capital and voting rights are already capped. RBI also mentions ‘inordinate delay’ by KMB in filing the petition. This disingenuously ignores the fact that a tightly regulated entity, especially a bank, cannot possibly drag the regulator to court (especially one that enjoys the special position that RBI does) at the first difference of opinion. Its response also does not explain the rationale behind the frequent changes in policy.

RBI starts on a weak note by saying that KMB’s plea should not be accepted because it would set an ‘unhealthy precedent’ and that the ‘the reliefs sought by the petitioner, if granted, shall result in making inroads into RBI’s autonomy’ and make the petitioners ‘regulators of their own selves’.

RBI’s second argument is that the petition is filed by KMB, whose shareholding is regulated by it and not the promoter, Uday Kotak. RBI argues that this itself (that KMB is fighting Uday Kotak’s cause) shows how private banks need to ‘more independent’ and reflect the interest of all stakeholders whose voices need to be heard, and not those of one individual or family.

This is interesting, because documents attached to the petition indicate that all directions of RBI, including the original licence, were to Kotak Mahindra, the non-banking finance company (which applied for the banking licence) and later to KMB. Had Uday Kotak filed the writ as promoter, RBI could have argued that he has no locus standi, since its directions and dealings are with KMB. This is an issue that may be decided by the court fairly early in the hearings.

RBI’s argument is also ironical because the IL&FS scandal, counters its basic premise about the importance of promoter holding as well as the efficacy of its own supervision. If anything, it is RBI’s failed inspections and supervision that have inflicted losses on pension and mutual fund investors and led to a systemic crisis.

Ravi Parthasarthy, founder of the IL&FS group, was allowed to remain at the helm and run it like a private fief for 30 years with no direct shareholding. The Employee Welfare Trust (EWT), through which he and the management cabal held some shares (individually insignificant), was shockingly manipulated and RBI was clueless.

The experience with IL&FS and even the ‘professionally’ run National Stock Exchange (NSE), make a strong case for ensuring that promoters have adequate ‘skin in the game’ to be held directly accountable, and the need for effective regulation to ensure that they always act in the interest of all stakeholders. 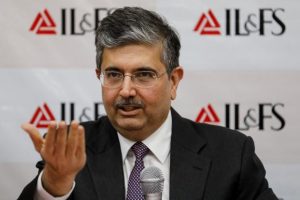 In KMB’s case, it could contrarily be argued that Uday Kotak, as promoter, with most of his wealth in the Bank, has both his name (reputation) and money at stake and would work to protect both. In fact, this is an argument that is being made all over the world, in the face of new evidence that management with no ‘skin in the game’ tend to be greedy and even likely to manipulate results and fake performance to extract greater rewards over a short horizon of their tenure, sacrificing the long-term health of the organisation.

The KMB matter, which will come up for hearing on April 1, is unlikely to be decided in a hurry. Meanwhile, there is need for a dispassionate review of RBI’s powers, policy-making and supervision and transparency to stakeholders, who pay a price for its failures. None of the challenges mentioned above is likely to lead to a comprehensive review which will be good for RBI and for the country.

Also read: IL&FS and the La-La Land that is Indian Credit Rating

As an aside, one cannot fail to mention that Uday Kotak was a member of the Bimal Jalan committee on ‘Review of Ownership and Governance of Market Infrastructure Institutions’ of 2010, which had concluded that: “Imposing restrictions on ownership is one of the ways of exercising regulatory control over a stock exchange.” This was seen as a way to favour the NSE structure; but, as is clear from later events, it failed in the face of ‘regulatory capture’ by NSE and the Exchange was run like a private fief by the founding team of Ravi Narain and Chitra Ramakrishna.

So views change with time and experience on the ground. But, hopefully, the courts and policy-makers will keep in mind that regulatory accountability and prompt supervision are far bigger and deeper issues for the country. We cannot afford continued mishandling on that count. The days of treating RBI as a god that cannot be questioned, no matter how egregious its failures, are long over.

This article has been republished from Moneylife. Read the original article.