Unpacking RBI's Bazooka 2.0: What it Means for the Economic Response Against COVID-19

While the entire package is positive, the efficacy of some key measures will depend on the bank lending process, even as we await the Centre's fiscal bazooka. 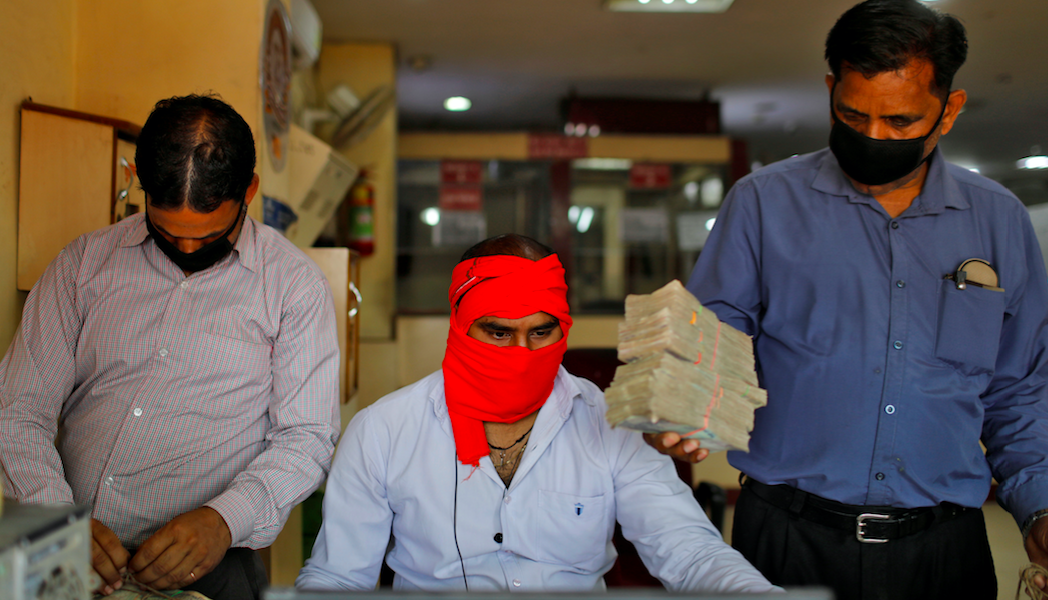 A bank employee with his face covered with a cloth works inside a bank during a 21-day nationwide lockdown to slow the spreading of coronavirus disease (COVID-19) in Agra, India, April 7, 2020. Photo: Reuters/Danish Siddiqui

The Reserve Bank of India has been closely monitoring the evolving situation surrounding the pandemic, and has been delivering a myriad of unconventional measures from its arsenal during these unprecedented and uncertain times.

After ‘Bazooka 1.0’ on March 27, 2020, the RBI governor on Friday came up with “Bazooka 2.0” containing a slew of measures with a more directed approach to alleviate the concerns in the financial sector.

These measures included a second round of Targeted Long Term Repo Operations, a 25 bps cut in the reverse repo rate, Rs 50,000 crore in refinancing facilities for NABARD, SIDBI and NHB to meet sectoral credit needs, increasing ways and means advances for states and relaxation of a number of compliance for banks.

Though the entire package is positive, the efficacy of the first three measures would depend on the lending process from the banks. The biggest positive is an increase in temporary funds to the states which would provide greater comfort to them amidst dwindling revenues and rising expenditures.

The following analysis focuses on the details of a few of the announcements but the larger question is whether we will see Bazooka 3.0 and when we will see this monetary stimulus be coordinated with a fiscal stimulus to address the contagion caused owing to the pandemic?

The exercise referred to as ‘targeted long-term repo operations is an instrument through which the central bank has been infusing liquidity into the banking system for a temporary long-term duration of 3 years.

To illustrate, say on March 27, the RBI undertook a TLTRO of Rs 25,000 crore for a period of 3 years. In this transaction, the banks will place the government securities (which it holds) with the RBI and in turn the RBI will infuse Rs 25,000 crore into various banks based on an auction based process. Three years later (on March 24, 2023), this transaction will be reversed and money will flow from the banks to the RBI and government securities will move in the opposite directions.

The objective here is to make funds available to the banks at a lower cost which in turn should be directed to the credit markets.

However, it is also important to note that TLTRO 1.0 aggregating Rs 1 lakh crore was focused also on easing the intensification of redemption pressures and surging liquidity premia various capital and currency markets.

The infusion of almost Rs 75,000 crore till April 15 into the banking system via TLTRO 1.0 significantly widened the banking system’s liquidity and also saw a moderation in corporate bond spreads for 3 days after the announcement.

However, since the start of the new fiscal, banking system liquidity surplus (widening) and GSec yields and corporate bond spreads (increasing) have been moving in directions different from its natural course, as highlighted in Chart 1 and Chart 2 below.

Easing banking system liquidity should have theoretically eased yields across the board but expectations of higher government market borrowings (owing to a fiscal stimulus package) and repayment concerns amidst challenging macroeconomic scenarios have led to an opposite scenario. 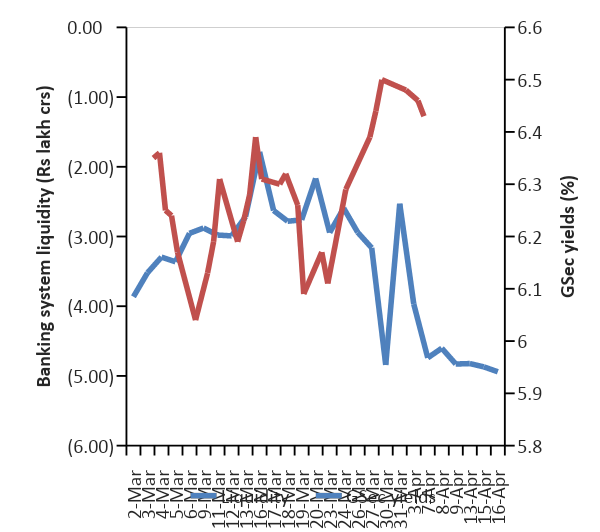 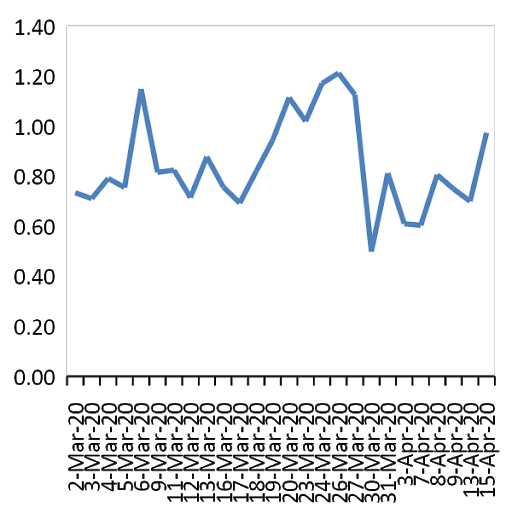 With TLTRO 1.0 being more focused on providing adequate system level liquidity, the renewed version TLTRO 2.0 includes targeted liquidity provision to sectors and entities experiencing liquidity hindrances. The funds availed in TLTRO 2.0 aggregating Rs 50,000 crore (for starters) have to be invested in investment grade bonds, commercial papers and non-convertible debentures of NBFCs, with at least 50% of the total amount into small and mid-sized NBFCs and MFIs.

TLTRO funds so far have largely been lapped up by public sector entities and large corporates (in the primary markets) but efficacy of a more improvised and directed version would depend on the risk appetite of the banks.

The banking system undertook reverse repo operation of almost 7.4 lakh crore on April 7 reflective of channelizing the funds received back to the avenue from where it was received. The RBI governor announced that the reverse repo rate has been reduced further by 25 bps to 3.75% at present. The gap between repo rate and reverse repo has further widened from the previous level of 40 bps to currently 65 bps.

A widening of this gap should, in principle, mean “tightening of the monetary policy” wherein the banks can borrow at a much higher rate vis-à-vis the surplus funds which they can invest it back with the RBI. However, the objective here is different and rightly has been to discourage the banks to park the surplus funds with the RBI and rather lend or invest in the capital markets. Though the quantum of reduction of 25 bps is debatable, this has been an ideal move from the RBI. However, the RBI can only be an enabler while the success of the move will be with a lag and would depend highly on the demand for funds and risk aversion of the banks to lend or invest.

However, the monetary policy framework clearly mentions that the framework aims to set only the “policy repo rate” based on the current and evolving macroeconomic situation.

Inflation would see a gradual reduction in FY21 and will also provide more monetary space for a rate cut. But with repo rate at 4.4%, real interest rate is already in the negative territory and will gradually move into the positive territory with ebbing inflation. Therefore, before further rate cuts, an eye on the partial transmission of the original 135 bps (Feb’19 to Feb’20) and subsequent 75 bps (in March’20) should be looked upon.

It is important to note that the monetary policy has responded swiftly and positively. However, as Ben Bernanke said that “monetary policy has never proved able to reverse large shocks. It only helps to mitigate the worse effects of shocks, and speeds up the recovery.” The RBI may also have Bazooka 3.0 but a reversal of this large shock will require a “Fiscal Bazooka” as well.

A focused expenditure plan from the Centre is now the need of the hour. The baton has been passed long ago, it’s time for the fiscal to run towards the finishing line and make up for lost time.

Sushant Hede is an Associate Economist at CARE Ratings. Views expressed in this article are personal.