Why Have Some States Lost Interest in the Centre's Flagship Crop Insurance Scheme?

The Pradhan Mantri Fasal Bima Yojana programme will complete five years when rabi crops are harvested in March-April 2021. But it's been a bumpy ride for most of the way so far. Out of all the ‘Pradhan Mantri’ schemes launched over the last few years – and there have been quite a few – none has received as much criticism as the PM Fasal Bima Yojana (PMFBY).

Due to the variety of crops even within a cluster, the small size of farms, differences in farming practices, uncertainty of weather and budgetary constraints of state governments, there is no central scheme which is more difficult to administer than this.

To its credit, the government has been responsive to the criticism and the scheme guidelines have undergone major changes twice, in September 2018 and February 2020.

Launched from Kharif 2016, the scheme has now been implemented for four seasons each of kharif and rabi. There have been three major criticisms of the scheme.

The first is that, at an all-India level, the claims paid by insurance companies are less than the gross premium received by them and this, critics say, resulted in ‘undue’ enrichment.

The second form of criticism is that the scheme is compulsory for all farmers who avail crop loans on their Kisan Credit Cards.

The third major criticism is that the assessment of crop losses is done through a large number of crop cutting experiments (CCEs) conducted by state governments. Not only are these CCEs quite time-consuming, they are also not reliable enough. In several cases, the yield data produced by CCEs has been challenged by both farmers and insurance companies. In several cases, the Government had to take the services of Mahalanobis National Crop Forecast Centre to resolve the disputes on yield of a crop.

The guidelines issued by the Centre in February 2020 have sought to address the above criticisms by making at least three major changes in the scheme.

Firstly, from Kharif 2020, the scheme was made voluntary and the farmers were given an option to opt out of crop insurance by submitting a written request to the bank.

Secondly, like the Modified National Agricultural Insurance Scheme (MNAIS), introduced by UPA II in 2010-11, the government capped the Central government’s liability in the premium at 30% for unirrigated areas and crops and 25% for irrigated areas or crops.

Districts having 50% or more irrigated area are to be considered as irrigated areas or districts (both under the PMFBY and Restructured Weather Based Crop Insurance Scheme). It means that the states will have to bear additional premium subsidy if actuarial premium exceeds the above limits.

Normally, unirrigated areas and risky crops attracted higher rates of premium in the tenders. However, there is no  capping of benefits to the farmers, unlike the earlier scheme of MNAIS.

Also read: PMFBY: 50% of Farmers’ Dues Being Paid in Only 30-45 Districts, Agri Ministry to Probe

Thirdly, the government decided to substantially enhance the use of modern technology (satellite, drone, mobile, etc.) for assessment of crop yield and estimation of losses and claims. For this a two-step process is to be adopted based on a ‘deviation matrix’ using triggers like weather parameters etc. It was also decided that the CCEs are to be conducted only in those areas in which there are strong deviations, noticed from use of remote sensing and other technologies.

It is true that due to high actuarial rates in several clusters, the states found that a substantial part of their agriculture budget was going to pay premium subsidies. The PMFBY was launched from kharif 2016 but Punjab never joined it.

In several states, the claims have exceeded the gross premium. In 2017-18, Chhattisgarh, Haryana, Madhya Pradesh, Odisha and Tamil Nadu the claims were more than the premium.

In 2018-19 also, Chhattisgarh, Haryana, Kerala and Tamil Nadu had a claims ratio of more than 100%. In 2019-20, harvested crops, lying in the farmers fields were damaged due to late surge of monsoon. Claims of more than Rs 4,500 crore have been paid in the state.

Yet, it is true that in several states the claims were less than the premium. 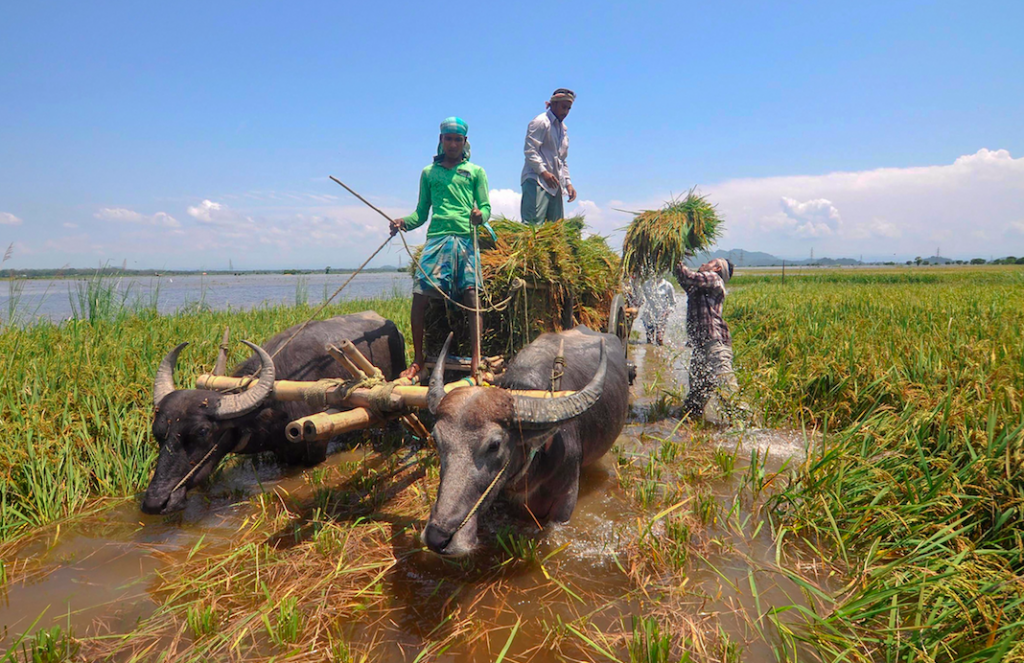 Bihar and Jharkhand have started their own crop insurance schemes under which farmers do not  have to pay any premium and they are eligible for crop insurance upto 2 hectares, if shortfall in yield is more than 20% of threshold yield. The insurance scheme in West Bengal is modelled on PMFBY and the companies are selected through a tender. The state does not take any premium subsidy from the Centre.

Andhra Pradesh has decided to set up its own crop insurance company and it has applied to Insurance Regulatory and Development Authority for a licence. No premium is charged from farmers. So far, the scheme is being operated by the state government and there is no participation of insurance companies. As a result, the state government will be  responsible for payment of any claims.

Haryana is also said to be exploring if it can form its own insurance company. For kharif 2020, however, it has gone in for PMFBY.

In the states which have set up their own insurance companies, premium subsidy from the Centre will be available only if actuarial premium rates are discovered through a transparent process of tendering. In any such tenders, all the empaneled companies of private and public sector will also be eligible to participate. It is yet to be seen how the state level insurance companies will compete with Agriculture Insurance Company (AIC) and other private companies which have long experience of running crop insurance.

Despite recommendation of experts, this year also, the states did not finalise their tenders before the first forecast of monsoon was issued in early April. As a result, several states could finalise the insurance company and issue notifications only in July.

For this kharif, the cut off date for insurance is July 31, 2020 but Uttar Pradesh is yet to decide if it will be ‘opt out’ or ‘opt in’  for farmers. If it decides for ‘opt in’ option, every farmer will be required to submit their request to the bank for insuring their crops. Other states have gone in for ‘opt out’ option under which  only those farmers need to submit a written request to their bank who do not want to insure their crop. A farmer tends to his field in Shimla during the nationwide lockdown to curb the spread of COVID-19. Photo: PTI

As mentioned above, one of the major criticisms of PMFBY in the media and public discourse was that it has resulted in undue enrichment of private insurance companies. In 2019-20, out of Rs. 31,391 crore of gross premium of all the insurance companies, PSU companies collected Rs 16,325 crore (52%). AIC alone collected GP of Rs 13,651 crore (43.5%).

ICICI Lombard, Cholamandalam MS, Shriram General Insurance and Tata AIG have opted out of PMFBY from kharif 2019-20, as they felt that the claim ratios in previous seasons were too high.

These reports suggest that accuracy upto 85-90% can be achieved in assessment of crop yield for rice & wheat. This can reduce dependence on crop cutting experiments. There is a need to integrate use of technology for assessment of yield. This can shorten the time taken by CCEs which has been a major cause of delay in settlement of claims.

PMFBY will complete five years when rabi crops are harvested in March-April 2021. In 2019-20, the Centre and the states paid Rs 27,075 crore as premium subsidy. It is time the government launched a comprehensive evaluation of the scheme which should  be concurrent with this year’s kharif and rabi crops. This can enable the Centre and the states to decide the way forward.