Is Philanthropy in India Growing?

Here's a look at what the numbers reveal. 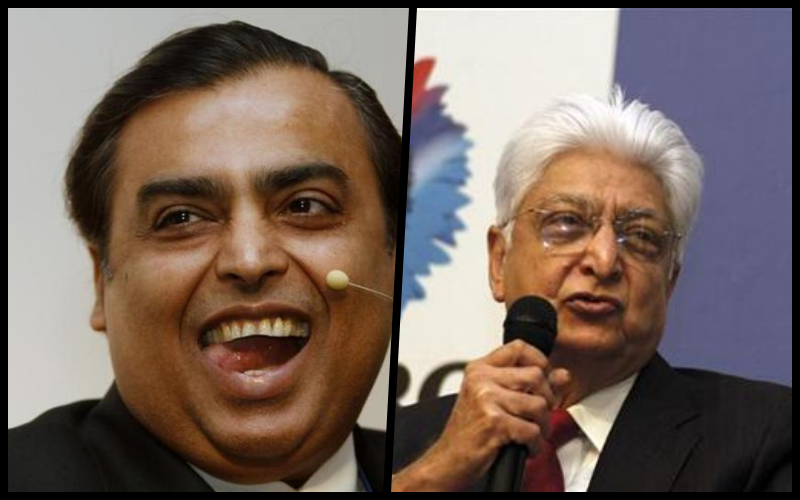 Mukesh Ambani and Azim Premji, ranks one and two on the list. Credit: Reuters When it came to philanthropy though, only 38 men and one woman made it to their annual Hurun Indian Philanthropy List 2018 , which looks at Indians  who have donated Rs 10 crore or more in a 12-month period.

Mukesh Ambani who topped the India Rich List with a net worth of Rs 3,71,000 crore was ranked number one on the Philanthropy List as well, having donated Rs 437 crore towards education, healthcare, and rural development; the amount donated equals 0.1% of his wealth.

This is also the first year Ambani has made it to the top of the Philanthropy List despite having topped the Rich List for the seventh year running. Azim Premji to the rescue The data is eye-opening. Despite its limitations – it uses CSR data as a proxy for giving and only captures giving over Rs 10 crore – it paints a picture that runs contrary to the general perception in the country—that as our people get wealthier, they are likely to become more generous.

How we compare against China

When we compare ourselves to China, as we are wont to do with different aspects of our country’s performance – be it the rate of economic growth, the state of infrastructure, population and demographics, or even just the number of billionaires – we come off looking even worse.

In 2018, China had 100 philanthropists who gave more than Rs 17 crore each year. Of these 13 were women. The average donation amount was Rs 230 crore. So, is philanthropy in India really growing?

The Bain India Philanthropy Report 2017 that is so often quoted by everyone who writes about the exponential growth in private philanthropy in India, contains the following data:

The number that gets everyone excited and optimistic about Indian philanthropy is the Rs 36,000 crore number in 2015-16 contributed by individual philanthropy. It shows a 6X jump from the 2011 data, the highest when compared to others – CSR at 1.5X, foreign funding at 2.4X.

However if one breaks down the Rs 36,000 crore in the period April 2015-March 2016, it is highly likely that Rs 27,514 crore came from Premji alone; which means that other Indian philanthropists gave just around Rs 8,500 crore. When this number is compared to Rs 6,000 crore in FY 2011, the jump is more modest at 41 percent and lower than the pace at which CSR and foreign funding grew, during that five year period.

The question then to ask is: Is the philanthropic market actually growing? Or is it dependent on the same few individuals and foundations who give generously year after year?

For a country that is estimated to produce 70 new dollar millionaires (people with a net worth of Rs 7 crore) every single day between 2018 and 2022, the question to ask is what can we do to encourage many of them to become philanthropists?

As a starting point, we need to do more around tracking giving in India at different levels. While Hurun attempts to cover giving by the very rich, research and consulting firm, Sattva, is attempting to track everyday giving by ordinary citizens. We need data for individuals in the vast middle (who earn between Rs 50 lakh to 100 crores annually), and who have the potential to give between Rs 1 lakh to Rs 5 crore every year.

The last report that came closest to this was the Bain India Philanthropy Report 2015, which surveyed 377 individuals. However, 49.1% of these were people who gave between Rs 50,000 – Rs 1 lakh – still relatively smaller ticket. Since then, their subsequent reports 6 have been based on data drawn from interviews and surveys with a much smaller sample size of 33-46 ultra-high net worth individuals.

Ashoka University’s Centre for Social impact and Philanthropy (CSIP) has made a start by looking to scrape data from large databases (Union Budget documents, Ministry of Home Affairs, Income Tax Department, NGO Darpan, and Ministry of Corporate Affairs) to pull together data on different types of giving. While they have succeeded in compiling and analysing data for foreign funding and CSR, they acknowledge that “Individual giving remains the biggest missing piece in estimating the total volume and value of philanthropic capital in India”.

We need to look beyond ‘high net worth’ philanthropists

Conversation and media attention around philanthropy in India has tended to focus almost entirely on the ultra-wealthy and CSR. However, the former do not seem to be too keen on giving, while the latter will continue to plod along and grow steadily as mandated by the law

Maybe it’s time to focus on smaller-ticket individual giving or retail giving. At the moment, the data on this front isn’t too encouraging either. According to the World Giving Index that is released each year by Charities Aid Foundation, India was ranked 124th among 144 countries in 2017; this has been our worst performance in the last five years. We have also consistently been at the bottom of the heap when compared to all our South-Asian neighbours.

However, given the attention and money that has been channelled to build high-value philanthropy, as a sector we have done almost nothing to grow the mass-market – the everyday givers. In the US, individuals accounted for 70% of all giving.

In India there are almost no organisations, other than voluntary initiatives like DaanUtsav, that serve as market-makers for people to give. While organisations like GiveIndia and crowdfunding platforms like Ketto, Smallchange.ngo, and Milaap seek to ‘tap’ the market, they don’t have the wherewithal to ‘grow’ the market.

Just as foundations, the likes of Omidyar Network, Bill and Melinda Gates Foundation, USAID and others, have invested in intermediary organisations to build the ‘strategic’ philanthropic market, we need institutions and foundations – who are interested in growing and strengthening domestic philanthropy – to invest in inspiring people to give, building campaigns and awareness around causes, and improving the retail-giving infrastructure.

The limited data we have shows that there is almost no link between the growing wealth in our country and the amount people give via philanthropy. And, left to itself, domestic Indian philanthropy – whether retail or high-value – is unlikely to grow in the manner in which we would like it to.

For that to change, we need more data, new strategies, different approaches, and more organisations that can build new giving markets. Without this, we will fail in our attempts to support civil society in the manner that they truly deserve.

This article was originally published on India Development Review. Read it here.