As Fuel Prices Hit Record Highs, Are Oil Politics Placing the Centre on a Sticky Wicket?

If oil marketing companies continue to pass on surging global prices to consumers, inflation could prove to be a threat and expose the NDA government to risk of electoral backlash. 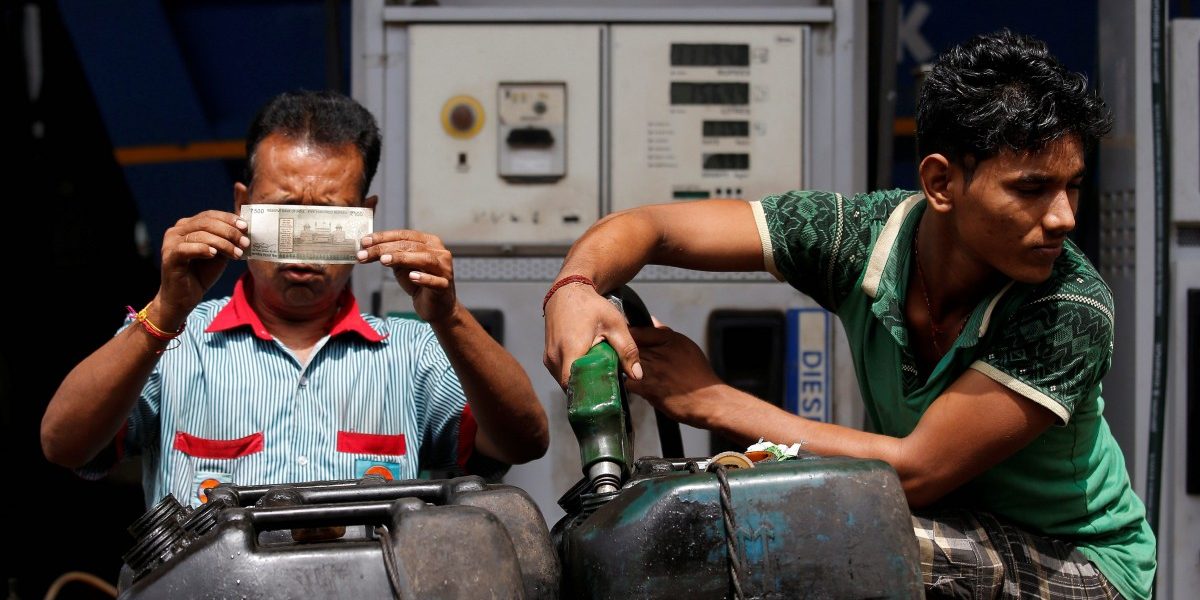 A worker checks a 500 Indian rupee note as a man fills diesel in containers at a fuel station in Kolkata, India, August 14, 2018. Photo: Reuters/Rupak De Chowdhuri

New Delhi: Retail petrol price hit Rs 80.38 a litre in Delhi on Saturday, registering an increase of 5.8% since July 4, as oil marketing companies (OMCs) passed on the upsurge in the global market to consumers as part of their daily rate revision.

The falling rupee has further exacerbated cost pressure for Indian refiners. The Indian currency has seen an erosion of over 10% in its value against the US dollar this year. It has already breached 72-mark against the greenback.

Prices of both petrol and diesel have been deregulated, which means the government cannot openly interfere with auto fuel pricing.

The opposition has attacked the government over high fuel prices, with former finance minister P. Chidambram recently saying that petrol price can be reduced by Rs 25 a litre by cutting tax on it. But finance minister Arun Jaitley has outright rejected Chidambram’s suggestion.

“Another distinguished predecessor of mine had stated that the tax on oil should be cut by Rs 25 per litre. He never endeavoured to do so himself. This is a ‘trap’ suggestion. It is intended to push India into an unmanageable debt – something which the UPA government left as its legacy,” Jaitley wrote in his blog.

He further said, “We must remember that the economy and the markets reward structural reforms, fiscal prudence and macro-economic stability. They punish fiscal indiscipline and irresponsibility. The transformation from UPA’s “policy paralysis” to the NDA’s “fastest growing economy” conclusively demonstrates this. The government is aspiring to improve the tax-GDP ratio.”

India’s fuel prices are currently among the highest in Southeast Asian countries, largely because of excessive taxes imposed by the central and state governments on them (over 40% of the final costs of petrol and diesel), as reported by The Wire last September.

International oil prices started their descent in July 2014. The Narendra Modi government, which assumed office in the last week of May that year, took advantage of the crash in oil prices to boost its revenues and bridge the country’s fiscal deficit instead of passing on the benefits to consumers.

When the global oil market rallied early this year, putting upward pressure on domestic fuel prices, the government cut excise duty on petrol, diesel by Rs 2 a litre and also abolished the additional excise duty of Rs 6 a litre. But it imposed road cess of Rs 8 a litre on petrol, diesel to make up for the revenue loss resulting from the reduction in excise duty.

If the OMCs continue to pass on the surging global prices to consumers, inflation could go out of control and expose the government to the risk of electoral backlash at a time when the next general elections are round the corner.

Although the US-China trade spat weighs on the global oil market, it still remains strong on supply concerns as the November 4 deadline for the implementation of US nuclear sanctions approaches. Iran’s exports have already shrunk by one million barrels a day as refiners cut their purchases of oil from the Persian Gulf country to avoid being hit by US sanctions.

Given US President Donald Trump’s hard line on Iran, US sanctions are likely to be enforced strictly. That means it would be difficult for allies like India to secure exemption to continue to import Iran oil post November 4.

Iran’s oil exports could drop by 1.25-1.5 million barrels a day by December end and push prices above $90 a barrel from the current level of $70-75 a barrel, analysts have warned.

Bank of America Merrill Lynch analysts have projected that for every one million barrels per day imbalance, there could be an impact of about $17 a barrel on the benchmark Brent crude price.

The oil cartel, Organisation of Petroleum Exporting Countries’ (OPEC) reference basket price averaged at $72.28 a barrel in August. In comparison, the average price of the basket in September works out to $75.45 a barrel. Over the last two months, the OPEC basket price has risen by 41.27%, as per data compiled by countryeconomy.com.

There are doubts over other oil exporters ramping up supplies to make up for the loss of Iran crude, said energy experts.

India has seen flight of foreign capital this year on concern of its current account deficit (CAD) widening due to high oil prices. Foreign portfolio investors have pulled nearly Rs 48,000 crore out of India during the first six months of this year (January-June 2018). They withdrew a net sum of Rs 41,433 crore from the debt markets and another Rs 6,430 crore from equities market.

Although foreign portfolio investors have been net buyers of Indian debt and equities during July and August, renewed concerns about widening CAD could scare them off.

But on the bright side, India received $12.75 billion, nearly 23% higher compared to the same period last year. But FDI alone may not be enough to fund the CAD.

International financial research firm Nomura has projected that India’s CAD could widen to 2.8% of GDP in 2018-19 from the relatively benign level of 1.9% in the last fiscal.

The unfolding external scenario could well prove to be a rerun of the situation that the previous UPA government faced ahead of 2014 general elections, which worked to the advantage of then-opposition Bharatiya Janata Party.

But this time, the shoe is on the other foot.