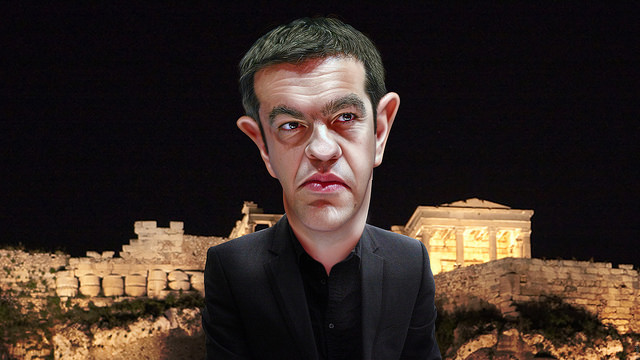 Alexis Tsipras during his visit to the European Parliament in February 2015. Credit: Martin Schulz/Flickr, CC BY-NC-ND 2.0

The recent resignation of Greek prime minister Alexis Tsipras opens space for a national unity government in the country. Of course, Tsipras quit not because his political failures made life unbearable or because he wants a better future for Greece, but because he wants more power.

This is a man deluded with his own importance. He is young and handsome. His “leftist” ideology has no room for  philosophy and strategic thinking. Next to meaningless promises of global brotherhood and eternal peace, the head of Tsipras is full of egoism and the desire to please, especially politicians of the European Union. So he probably sees his resignation as a step to being re-elected with many more Greeks voting for him.

This miscalculation betrays poor judgment. He wants rewards for bad decisions. Tsipras is the product of the last six years of horrible social and political conditions in Greece.

But why did Greece collapse in 2009? Greece, like the rest of the world, was the victim of bad economics in the United States, where giant Wall Street banks wrecked the world economy with their gambling and their misuse of public funds. And while America “recovered” from the shock of financial recession, Greece did not. The American government bailed out its banks because of the fear that they were “too large to fail.” Greece did not have that option. It is linked to the euro, which is under the control of the European Central Bank and European Union, of which it is a member.

To avoid bankruptcy, Greece since 2009 has been under the tutorship and financial dictatorship of its European partners, including partners from North America bearing gifts from the International Monetary Fund. Together, the European Central Bank, the European Commission and the IMF conceived of an extraordinary way of looting and impoverishing the Greek people. They wrote “memoranda of understanding” in which they ordered Greek officials to cut public works, increase taxation, and put up for sale all property belonging to the state.

The pre-Tsipras prime ministers, 2009-2014, all right-wing corporate men, said yes to their European-American bosses and signed on the dotted line. Whether they understood it or not, they signed off their country’s sovereignty and self-respect. The result of the foreign-imposed “austerity” medicine has been as bad as poison. There were reports of Greeks committing suicide. Millions of Greeks lost their jobs, medical care, and social safety net. Suddenly, homeless and hungry people appeared in the streets of Athens.

The other catastrophic effect of the engineered austerity collapse of Greece was decline in national security. Refugees from the upheavals in Afghanistan and the Middle East discovered the unprotected borders of Greece, especially the Greek borders with Turkey. Criminals stepped in this vacuum and they have been bringing thousands of desperate people to the Greek islands of the Aegean.

It was this social deluge in Greece that brought Tsipras to power in January 2015. He and his political agglomeration, Syriza, promised to bring the austerity to an end. In fact, Tsipras promised the anguished Greeks he would tear apart the memoranda of understanding with the hated European and American lenders.

Instead, after blustering propaganda for most of his short tenure, he designed a grand deception. He ordered a referendum and asked Greeks to reject the foreign-imposed austerity. About 62 percent of the Greeks did in fact vote against the continuation of the European Union-IMF austerity.

Tsipras then put his amoral scheme into effect: signing in August 2015 another odious memorandum with the lenders.

The word odious comes from a Greek Parliamentary Committee that investigated the country’s debt. It concluded the debt was “illegal, illegitimate and odious” and should not be paid back. Yet, Tsipras saw things differently.

The memorandum Tsipras signed is a violent blow against Greek sovereignty. In reading it, I was struck about the utter contempt the European-Americans have for the Greeks. They treat them like children: you do this by that date, or else.

The memorandum starts with a rotten pie in the sky: that it was designed for the welfare and economic recovery of Greece. It says the purpose behind the EU-IMF-Greece agreement is to “restore sustainable growth, create jobs, reduce inequalities, and address the risks to… [Greece’s] financial stability and that of the euro area.” In addition: “Success will require the sustainable implementation of agreed policies over many years.”

Yes, even tyranny must be sustainable.

J. Dijsselbloem, president of the Eurogroup, had no problem saying on August 14, 2015, that the memorandum promised the Greek economy to “return to sustainable growth.”

Not a clue that two other memoranda since 2010 with nearly identical verbiage had brought Greece to its knees.

So why is Tsipras betting on being reelected by supporting more austerity, more poverty, and more looting of his country? Is it because corporate media are embracing his corporate socialism? Perhaps. But besides the faults of Tsipras, the EU and IMF are equally guilty for the wounds they have been inflicting on Greece.

The Greeks should dump Tsipras and elect a government of national unity and salvation that will preserve the dignity, national sovereignty, and security of the country.

A government of national unity should be for the rebuilding of Greece with its own abilities and wealth. Go to Russia and China for money. Reject the relentless looting of the EU-IMF. Return to Greece’s own money, the ancient drachma.

Evaggelos Vallianatos is the author, with McKay Jenkins, of Poison Spring (Bloomsbury Press, 2014).