While a hue and cry was raised by economists when the government gave oil subsidies, they are all mum now that petroleum taxes have been raised sharply. 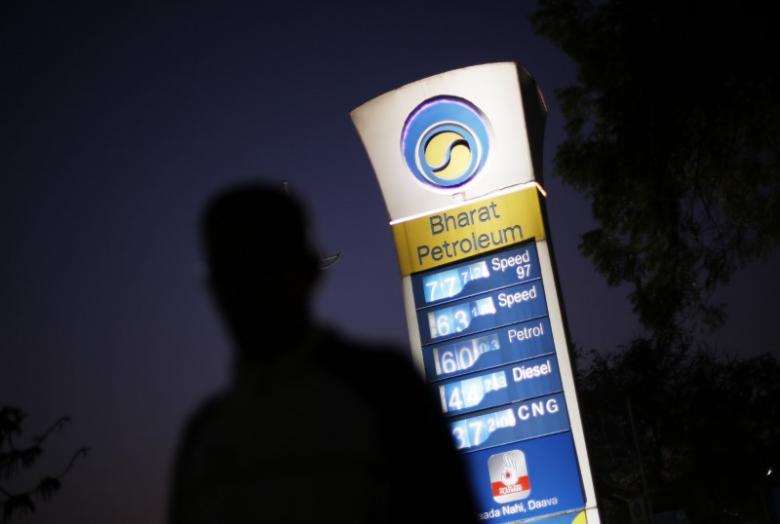 Historically, India’s net oil subsidy was nothing but a myth after factoring in taxes on petroleum products. But in the last two years, as oil prices declined internationally, the government went further and shifted to an oppressive regime of punitive oil taxes. In earlier years, economists linked to the capital market were vociferous in their condemnation of oil subsidies and advocated ‘market pricing’ of this key resource, as subsidies, they argued, distorted the market. Even at that time, their argument ignored the glaring fact of taxes on petroleum products. However, it is even more remarkable that for the past two years the same economists populating policy-making, credit rating agencies and capital markets appear to have lost their voices when the Indian government violated market prices in the opposite direction, sharply raising the rate of petroleum taxes. This was done despite the demand slowdown in the economy. Heavy petroleum taxes have no doubt helped to meet fiscal deficit commitments and satisfy global investors. But they have also helped suppress an already faltering consumer demand.

In a period of declining global oil prices, a symptom of a global slowdown, the Modi government has abused this process by increasing taxes and not passing on the benefits of lower prices to the consumers. In the period from June 2014 till November 2016, in a sample of 10 developed economies (including China), India reported the highest percentage increase in diesel and petrol taxes in US$ terms. In contrast, most developed economies passed on the benefits of lower global oil prices to consumers. The Economic Survey 2016-2017 states: 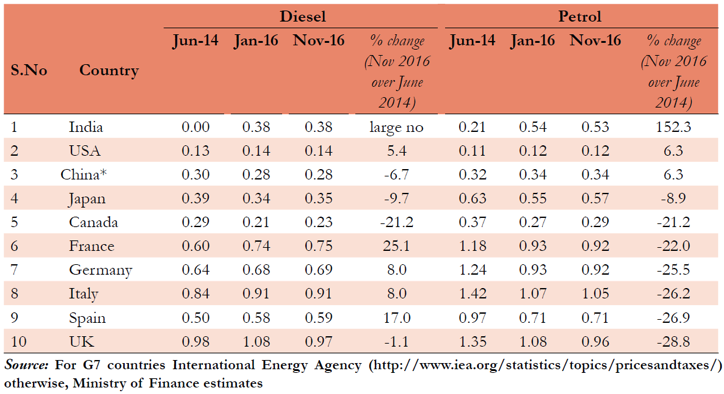 The Economic Survey then goes on to say that India has moved on from a regime of petroleum subsidies to a period of imposing “a tax on petroleum products at about US$150 per ton, which is about 6 times greater than the level recommended by the Stern Review on Climate Change.”

The survey does not question why an emerging economy like India should have oil taxes many times higher than the recommended norm. Not only is the petroleum tax in India significantly higher at the exchange rate of the dollar, but in purchasing power parity terms, which gives a sense of the burden for Indian consumers, it would be larger still. The average conversion factor during 2006-2015 for India from market exchange rate to PPP for India is 3.52. Applying this to India’s current petrol tax gives a figure of $1.87 (PPP) per litre – compared to a US petrol tax of $0.12 per litre. Similarly, diesel taxes are $1.34 (PPP) per litre in India, compared to $0.14 in the US.

What is ironical is that the Economic Survey, in the previous two years, with the same chief economic advisor in charge, had devoted substantial space to targeting what it considered to be unjustifiable subsidies on LPG and kerosene, which are in effect cross-subsidised by other petroleum products. By contrast, this year’s edition is unconcerned by the extortionate taxes a democratic government has imposed on its citizens by hiking the rate of oil tariffs.

Petroleum products are universal inputs; their impact is felt in every sector of the economy. They enter into transport, irrigation (diesel pumps), fertiliser, innumerable manufacturing processes and so on. It is impossible to avoid consuming petroleum, directly or indirectly. This is precisely why petroleum products are an easy source of tax revenue for governments. By not passing on the benefits of lower oil prices to consumers, the government has in effect imposed a highly regressive measure on its citizens at a time of an economic downturn. This has further restricted the demand of consumer staples (items of mass consumption) and further depressed the entire Indian economy. The consumer staples production index in FY 2016 declined by 1.8% and in April-December 2016 fell by a further -2.3% as compared with the -0.8% in the comparable period of 2015.

Instead of passing on lower oil prices to ease the burden on Indian society, the Modi government increased taxes to meet its fiscal deficit commitments and satisfy the demands of global investors. The Economic Survey does not show any concern for the impact of such measures on the Indian population and indeed the purpose of providing this data is in the context of climate change – to display India’s voluntarily taking on the burden of climate change mitigation, beyond the call of duty.

The Union Budget 2017-2018 presented to parliament revealed that the government was able to meet its fiscal deficit target of 3.5% in 2016-2017, primarily on account of the 22% increase in excise duty (production tax) over the estimate as it increased petroleum taxes, apart from other products. The government’s obsession with meeting the fiscal deficit commitments to satisfy global credit rating agencies and capital markets is imposing considerable austerity on its population and restricting demand in the economy. The tragedy of globalisation and of economic reforms is that instead of counter-cyclically stimulating the economy through expansionary fiscal and monetary measures, a democratically-elected government is more concerned with squeezing employment and growth, and using any available and regressive means to increase revenue to maintain the fiscal deficit – all in order to appease global capital markets.