While relief is of the essence in the short term, the far greater task is that of a reconstruction that must follow after the COVID-19 lockdown. People wait in queues alongside a road to enter a bank during a 21-day nationwide lockdown to slow the spreading of coronavirus disease in Agra, April 7, 2020. Photo: Reuters/Danish Siddiqui

For a time, it appeared as if India were exempt from the depredations of COVID-19 – which first appeared in China and was playing out in Europe. Now we find the number of cases increasing rapidly. There is concern that this may only be the tip of the iceberg as testing has remained very low in relation to the Indian population. The government has responded to this by allowing the private sector to conduct tests. Altogether, the governmental response has been quick – though from a medical point of view, some believe otherwise.

For some time, there was inaction on the economic front, but this was  addressed on March 26 when finance minister Nirmala Sitharaman announced a relief package. Its main contents included increased allocation of rations through the public distribution system. These were universal. In addition, there was a variety of income transfers. These are to be targeted. The package, at less than one percent of the national income, has met with criticism ranging from the insufficiency of the allocation to the likelihood of exclusion.

It is, however, necessary to appreciate two things. First, we have neither the experience nor the infrastructure to smoothly implement relief measures on the scale and with the rapidity required at the present moment. So the measures are almost certainly going to end up imperfect in their implementation. Second, relief is by definition meant to be temporary – to last only for the duration of the lockdown in which we are today and maybe a little beyond.

Nevertheless, two points may be made in the context of the relief package. Cash transfers may be made more swiftly than transfers in kind. Increased rations would require an efficiently working supply chain and would take time to reach the distribution points.

However, it is important to ensure that transfers are not grossly unfair. Transfers to farmers, identified on the basis of land ownership, without any made to labourers, urban and rural, would be an instance of this. Transfers must reach all who need it.

Finally, the state governments must be taken into confidence on the transfers as they are closer to the ground.  State governments must also be encouraged to contribute to the relief, as Kerala has done with a relief package amounting to over 12% of its annual budgetary outlay, which incidentally is double the national figure. 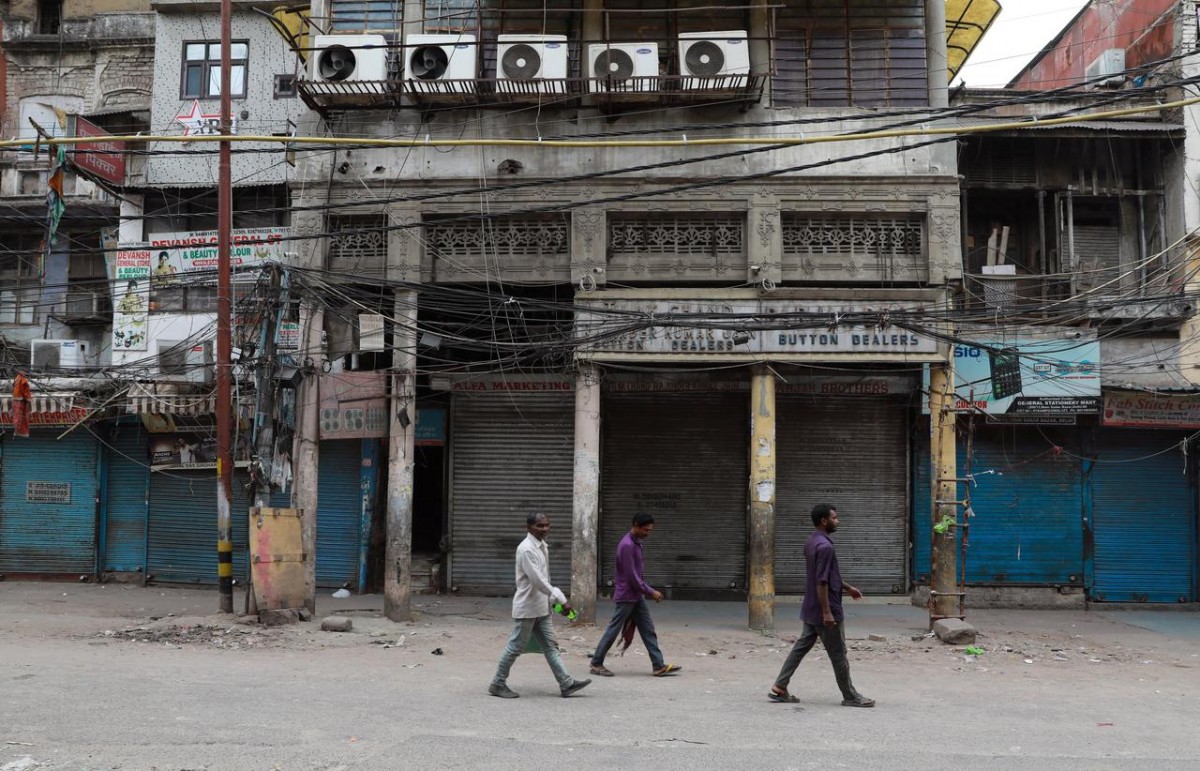 People walk past closed shops in a nearly deserted wholesale market during lockdown by the authorities to limit the spreading of coronavirus disease, in old Delhi, March 24, 2020. Photo: Reuters/Anushree Fadnavis

While the extreme hardship that will be faced by Indians with next to no savings during the lockdown is widely understood, what is invisible are the macroeconomic forces likely at work which are sure to leave them no better off even after the lockdown is lifted. Action is needed in advance to combat this near definite outcome.

The first impact of the coronavirus was to disrupt the global supply chain originating in China. As inputs from China enter into manufacturing elsewhere in the world, some production will not take place now, leading to lower  incomes in all the countries involved. This in turn affects demand for imports by these countries, and the originally supply-side disruption would have turned into a demand-based contraction.

There is, in addition to this purely economic force at work, the consequence of the sealing of borders to be reckoned with. An essentially tribal response denying ‘foreigners’ entry comes into action now. It affects tourism and business interaction, leading to a slump in the transportation industry. There is speculation that some airline companies may not survive the current downturn.

Also read: When Lockdown is Lifted, Manufacturers Face Challenge to Get Labour Back

When investment – which is largely impacted by the anticipation of the future, but some part of which responds to the present state of the economy – gets affected, we can imagine a feedback loop between investment and income which would generate a downward spiral for the world economy. As India is now integrated into it, it is bound to be adversely impacted by the global slowing.

A silver lining would be the lowered price of oil. We cannot so easily say which of these two channels will predominate. For India, the global slowdown due to the coronavirus comes at the heel of a domestic slowing for over three years, which may now be accelerated.

Private investment, already influenced by pessimism, is unlikely to provide a counter to the downward momentum. There is now an overwhelming case for the government to raise public spending to prevent a slump in aggregate demand. It is noteworthy that in the United States there has been a concerted effort between the government and the central bank to respond to the threat of a major downturn.

The United States Congress has closed ranks and plumped for a two trillion dollar fiscal stimulus. This is the biggest stimulus to be implemented in the history of that country. It amounts to 10% of US GDP for 2019 and constitutes a brave and timely response to the problem.

By comparison we are yet to hear of a stimulus from the government of India. For the economy perception is often more important than reality. Confidence in the future of the economy is what drives it, and the state has a crucial role in generating confidence through forward guidance and  current action. Faced with the possibility of a serious economic crisis involving output decline and unemployment there is only one course of action for the government to adopt. That is to step up aggregate demand via greater public spending. In principle the government could hand out cash which would have a multiplier effect alright but it would be preferable to invest in income generating assets.

In the short run, the former should take priority, to be quickly replaced by capital investment, which uniquely holds out the possibility of increasing both demand via the wages paid out in creating it and in raising productivity.

Right now, expansion of government expenditure is the key to avoiding an economic collapse. It is important that government is not swayed by either of two considerations. The one is the pre-announced glide path of fiscal consolidation under the Fiscal Responsibility and Budgetary Management Act, whereby the government of India is required to take the fiscal deficit to 3% of GDP.

The Narendra Modi government has made such a fuss about ‘fiscal prudence’ that it would not want to be seen as  disobeying its totem by allowing the deficit to rise. It is never too late to abide by Keynes’s dictum “The boom is the time for austerity”.

I have not mentioned the Reserve Bank of India thus far, but its role is vital under the circumstances. It must support the stimulus proposed by purchasing the government bonds issued to finance the increased expenditure. Legislation would be necessary to enable this, and bipartisan support to the initiative would be vital for confidence among investors. The stimulus agreed to by the US Congress can serve as a benchmark. At 10% of GDP, that would amount to approximately Rs 20 lakh crore. This may appear as huge, but it should be borne in mind that we face a situation such the current one only once a century. It is also a ballpark figure for the income loss due to the lockdown.

While relief is of the essence in the short term, the far greater task is that of a reconstruction that must follow. Reconstruction would entail both energising an economy that would have slowed during the lockdown, but also building one that would contain the goods needed to make life in India more secure in the future.

Naturally, the latter implies a concern not only for the elements revealed to be missing by the novel coronavirus but for all things necessary for a secure life, most of which are missing due to past policy failure.

Pulapre Balakrishnan is Professor of Ashoka University and Senior Fellow of IIM Kozhikode.