The aggregate macroeconomic impact of this Budget cannot really be assessed, since the actual fiscal stance is now so opaque. 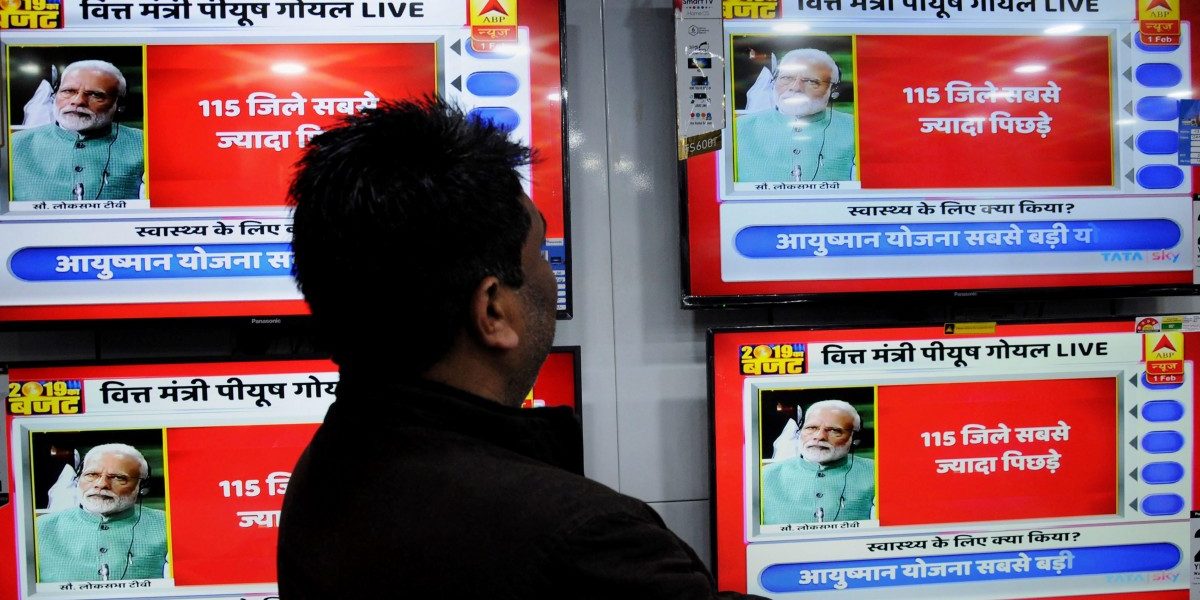 A man watched the Budget presentation outside a shop in Amritsar. Credit: PTI

Let’s get one thing clear. This is not an interim Budget, whatever the government finally agreed to call it. The sweeping promises made on both expenditure and taxation fronts are well beyond the limited minor changes that are supposed to be allowed in a vote-on-account or interim Budget.

For a government that officially has only a few months more to its tenure, this certainly crosses the borders of constitutional propriety. The Budget requires changes in the Finance Bill, which constitutionally should not be made by a departing government, and impose substantial commitments on spending (like cash transfers to small farmers) and taxes (like income tax relief) on a future government.

Maybe we are now, unfortunately, in a world in which all of that does not matter anymore, and there is no one in any position of authority to call the government out on this. In any case, it is obvious that this is a pre-election Budget with a vengeance. However, as has been typical of the Modi government, the Budget speech operated more on the optics than on the actual spending allocations and tax changes, and sought to create a feel-good impression without enough real changes that could change the direction of the economy.

Take the biggest-ticket item, which was widely expected, but still startling in scope. The Budget speech declared that “vulnerable landholding farmer families, having cultivable land upto 2 hectares, will be provided direct income support at the rate of Rs 6,000 per year.” This is declared to benefit around 120 million small landowning families – presumably on the basis of the Agricultural Census of 2015-16 that identified around 12.5 crore operational holdings of less than 2 hectares. It will be paid in three instalments of Rs 2,000 each.

It is not clear whether the government actually intends to provide this cash transfer to all those with such holdings, even those without land titles, such as tenants and women farmers, and if so, how this is going to be implemented.

This matters, because clearly the government intends to start making such payments immediately in the current financial year, having allocated Rs 20,000 crore for this because the scheme will be implemented retrospectively from December 2018. It has set aside the fairly large amount of Rs 75,000 crore for such payments in 2019-20.

Whether it would actually benefit the Bharatiya Janata Party electorally remains to be seen, of course. The proposed transfer does not amount to much for individual households (a payment of Rs 500 per month per such household is quite small given the massive costs faced by farmers currently) and it does next to nothing the address the real economic problems of farmers today. The interest subvention extended to fisherfolk and livestock breeders is also only a small change.

But the income transfer would still amount to an injection of demand in the rural economy. Given the current depressed economic state of rural India, that would certainly make a difference.

The other so-called “game changer” announced is that of the pension scheme for unorganised workers. But this turns out to be another jumla, of the kind that we should have got used to by now. The promise is only for a scheme that young people working in unorganised activities (who are in their 20s, say) have to start paying in today, in order to receive a pension of Rs 3,000 a month when they are more than 60 years old! This is a travesty of the actual requirement of universal pensions of around half the minimum wage that should be provided to all eligible adults by the government. As a promise based on long-term contributions, it also falls short of the Rs 3,000 per month being provided today as pension by the governments of Telangana and now Andhra Pradesh.

There are various benefits given to the middle class in terms of tax relief. But since these would kick in much later, it is not clear that they would have an impact either in terms of increasing effective demand from such households today or a political benefit for the ruling party.

The surprise is the lack of any effort to do something that would increase employment. In that sense this government continues to keep its head firmly in the sand about job creation (or the lack of it). Piyush Goyal’s speech was replete with references to how various economic activities must be creating jobs, but there has clearly been no official attention to what can be done about it.

Also read: 2019 Budget Allocation for MGNREGA Is Less Than What Was Spent Last Year

The other important point to bear in mind is that – unfortunately – very few of these numbers can be taken seriously, which is a tragedy for the citizenry and also for any future government (even one headed by the same party). The fiscal or revenue deficit estimates as shares of GDP are already tainted by the unbelievable GDP numbers that have just been released by a Central Statistics Office that appears to have been tamed by the NITI Aayog, in an unprecedented involvement of political appointees in official data creation.

Meanwhile, the cynicism of the government about the spending that matters for citizens still continues. The revised estimate for spending on MNREGA is only Rs 61,000 crore – an amount that was already exhausted in December 2018 – suggesting that the Central government plans no new spending on this in the coming months despite severe need for it across the country. This conforms to the pattern of pushing such dues on the next year, which has already hugely damaged the programme.

The Ayushman Bharat health programme, which was presented earlier as the “game changer” spent only Rs 2,400 crore while the planned spending for the coming year is only Rs 6,400 crore. The National Health Mission gets almost no increase in spending, while the flagship Swachh Bharat Abhiyan that is constantly invoked by the government spent Rs 865 crore less than budgeted for, and gets a further reduction in outlay for the coming year by Rs 4228 crore to only Rs 12,750 crore.

But the budget numbers themselves have been massaged by creative accounting of a level that makes past governments look at mere amateurs at this game.

The revenues from disinvestment are significantly more than what should be expected given the receipts so far, which was already only because public sector undertakings (PSUs) were forced to buy shares in other PSUs.

The receipts from “IEBR” (Internal and Extra-Budgetary resources) at Rs 5,58,597 crore, are a whopping Rs 1,73,766 crore more than the Budget estimates – and could only have been achieved by arm-twisting the now-pliant Reserve Bank of India, among other means.

This means that the aggregate macroeconomic impact of this Budget cannot really be assessed, since the actual fiscal stance is now so opaque. It’s all smoke and mirrors, once again.