The prime minister’s speech revealed contradictions between the way his government has acted and the way it wants to act on climate change and globalisation. 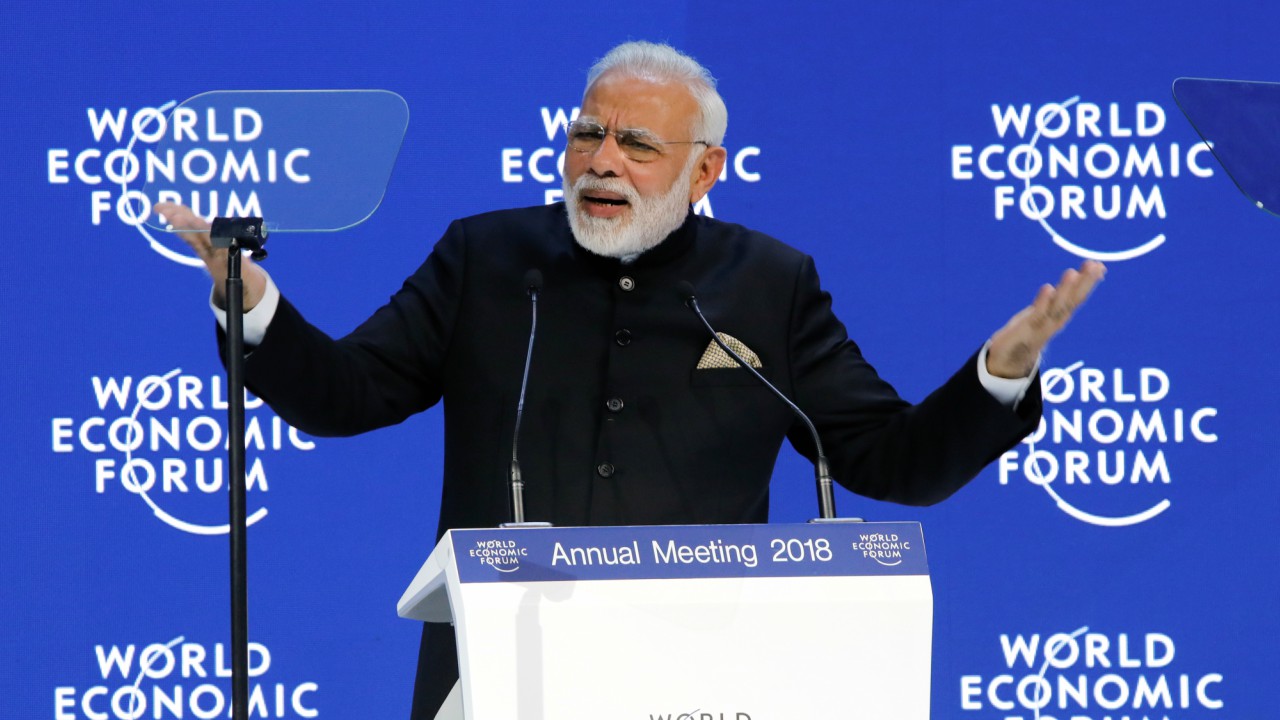 What did Prime Minister Narendra Modi seek to achieve with his speech at the annual meeting of the World Economic Forum (WEF) in Davos, Switzerland, and how does it stack up against the reality on the ground? Davos is all about making and getting cross-country investment, but heads of government seek to do more.

Under President Donald Trump, the US appears to be vacating its position as a global leader not just in terms of liberal democratic precepts but also as a key player in the process of globalisation and the battle to mitigate and prevent climate change. It is natural for two of the largest emerging global players, China and India, to try and occupy that space. Modi, as an Indian prime minister addressing the premier global business gathering after a gap of two decades, has made his bid.

In doing so, he chose to focus on three issues which are of uppermost concern today – climate change, terrorism and protectionism.

But the reality is that China’s President Xi Jinping has been a full year ahead of India in seeking to take up that vacant leadership space. He addressed the Davos gathering last year just as the Trump presidency was arriving and the world was trying to figure out how the US would stand on the global scene with his campaign promise of pursuing the agenda of “America first”.

Having asserted the leadership claim for China a year ago, Xi did not come to Davos this year, leaving the job of spelling China’s stance to his Harvard trained chief economic adviser Liu He.

This underlines a key reality while trying to understand China and competing with it. The Chinese think long term and prepare meticulously before putting a foot forward.

On the other side, there is an element of showmanship about Modi, captured in his oratorical prowess. He brought this into full play in his speech in Hindi which was strong on play with words and in parts importantly differed with the formal version put out by the Ministry of External Affairs. It was a commanding performance primarily meant for the home audience as the proximate one got the content in bland translation.

There is nothing intrinsically wrong in this except that it fits in with the idea of a flashy performance which is somewhat impromptu. But the speech delivered and the showmanship done with, the hard process of delivering on what was signaled in the speech has to be worked out.

Of the three issues which Modi highlighted, it is only on the issue of terrorism on which the Indian government not only has a well thought out game plan and knows where it is going but also how to garner global support for its position.

This is illustrated by the highly publicised visit to India by the Israeli prime minister. He has his own task of combating terrorism emanating from historically aggrieved Palestinians and is happy to lend a helping hand with strategic advice and technology to combat an elusive enemy.

But when we turn to protectionism, India’s record is ambivalent. On the key ratio of trade (imports plus exports) to GDP, which measures a country’s openness to global trade, World Bank data indicates that since the 1980s, China has been way ahead of India. Both were hit by the 2008 financial crisis which severely affected global trade and China’s lead disappeared. India made a recovery from 2010, but since 2014, it has lost ground and in 2016, both were at around the same level.

The US, with its large economy, has historically scored poorly and is a laggard vis-à-vis India and China. Trump makes no bones as to where he stands and came to Davos just after upping barriers against the import of Chinese solar power equipment and South Korean washing machines. On the latter, it is a repeat of the old story of Japanese car exports to the US. The US has turned protectionist in the face of more efficient competition.

Since global trade has suffered a setback after the 2008 crisis, protectionist measures taken since then are instructive. According to a World Trade Organisation count, China falls in the 100-200 (number of measures) range, whereas both the US and India fall in the over 300 group. In terms of tariff rate applied (weighted mean) for manufactured products (World Bank data), the US is low at 1.7%, China clocks 4.3% and India 6.2%. Identifying protectionism as a key threat to world trade is laudatory, but India has a long way to go in matching word with action by lowering its own trade barriers.

In the last three years, the Modi administration has taken a positive incremental approach to lowering investment barriers. This is, in fact, the foremost concern of the business tycoons who annually assemble at Davos. Globalisation has been its dharma and the key selling point for any national leader addressing the gathering has to be the welcome mat that he can spread out for foreign direct investment.

Now let us come to climate change. Trump has openly walked out on the Paris Accord and global efforts to counter climate change. India has made the right noises and Modi has highlighted India’s recent record in promoting renewable energy. But India’s commitment to fighting climate change will look more convincing when it is seen to actively reduce its dependence on coal. Plus, it is odd to affirm one’s commitment in this regard when the air quality of Indian cities remains among the worst in the world.

To think long-term in trying to take up a bit of the space that the US seems to be vacating, it is imperative to determine what kind of a global role India envisages for itself. The US was the leading world power in a unipolar world and saw itself as the primary defender of liberal democracy. India cannot match the Chinese in military or economic power. On the other side, China cannot match India’s democratic credentials, its openness.

So the global role cut out for India is to be the foremost defender of the liberal and democratic way of ordering society. It is here that the contradiction between Modi’s rhetoric and the reality on the ground in India today is the most glaring. Modi extensively used classical Indian texts in his speech at Davos to affirm India as a place of “shared vision, healing hearts and caring community”. The reality on the ground, going by the free rein being given to cow vigilantes and marauders defending Rajput honour, could not be more different.