While Sitharaman did not announce a large-scale stimulus plan, she made clear that there would be a boost in infrastructure funding and that steps would be taken on the bank recapitalisation front. 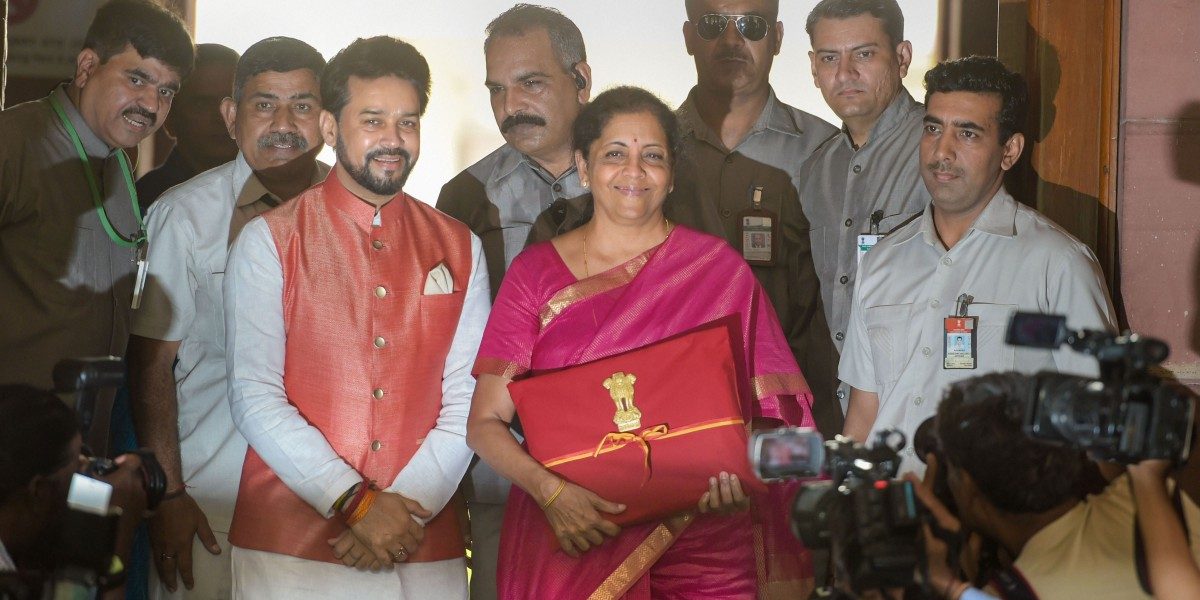 New Delhi: Finance minister Nirmala Sitharaman on Friday unveiled a Union budget that appeared to place slightly more emphasis on being a fiscally-responsible exercise than on boosting sluggish growth and attracting foreign investment.

In her two-hour-long Budget speech, Sitharaman did not announce a large-scale stimulus plan, but made clear that there would be a boost in infrastructure funding and that steps would be taken on the bank recapitalisation front.

She also announced credit help for non-banking financial companies (NBFCs), the broader industry of which is in the middle of a crisis, while indicating that regulatory supervision of parts of the sector would be handed off to the Reserve Bank of India.

On the taxation front, there was a mixture of progressive and protectionist steps. Taxes have now been raised on the super-rich, but the Indian middle-class is also set to hurt with additional duties being imposed on petrol, diesel, gold and a wide range of other finished products such as imported books and digital cameras.

Sitharaman also teased the possibility of opening up various sectors to foreign direct investment, but made no concrete assurances.

“The government will examine suggestions of further opening up FDI (foreign direct investment) in aviation, media, and insurance sectors in consultations with stakeholders,” she said, adding that 100% foreign ownership would be permitted for insurance intermediaries and that local sourcing norms would be eased for FDI in retailers selling a single brand.

At present, India allows 49% foreign ownership through the automatic route in the insurance sector, which is worth billions of dollars and has been tightly controlled for decades for fear of a backlash from the politically-connected unions.

There was also little change on the direct tax front – partly because changes in the income tax structure slab had already been carried out in the interim budget, and partly because the government panel in charge of overhauling direct tax law will submit its report only later this month.

The real surprise of the Union budget was that the Narendra Modi government has managed to marginally reduce its fiscal deficit target for FY’20 to 3.3%, down from the 3.4% that was projected in the interim budget back in February 2019.

It has been able to do this – despite lowering its tax revenue collection target to Rs 24.61 lakh crore from Rs 25.52 lakh crore in the interim budget – by banking on higher disinvestment proceeds (nearly Rs 20,000 crore more than what was laid out in interim Budget), higher dividend from the RBI and higher spectrum receipts (Rs 9,000 crore more).

It also assumes a 12% growth in nominal GDP growth for FY’20, which some would say is overly optimistic and higher than the 11.5% assumed in the interim Budget.

What will also help is that the Centre will start carrying out government borrowings from foreign markets – in effect selling India’s first global sovereign bonds.

Other steps, such as carrying out bank recapitalisation worth Rs 70,000 crore through the issuance of securities, ensures that government spending will not be a part of the Budget but instead an offering instead through the recap bond route.

“I think overall it seems like there is some support in the budget to address the sluggish growth in the economy and that’s going to make achieving a tighter fiscal deficit challenging,” said Gene Fang, associate managing director, sovereign risk group, Moody’s Investors Service, in a statement.

Sitharaman argued that it was “high time that India gets fully integrated into the global value chain of production of goods and service”.

“It is high time India gets fully integrated into the global value chain of production of goods and services but also becomes part of the global financial system to mobilise global savings mostly institutional in insurance, pension, and sovereign wealth funds,” she said.

However, most experts say scaling up the Indian economy will need bold reforms including freeing up land and labour markets, which Modi shied away from in his first term for fear of political backlash.

Though the budget speech tipped its hat to the upcoming labour reforms, it did not contain any mention of the new and rumoured industrial policy that aims at reviving Make-in-India and creating manufacturing jobs.

Capital Economics said in a note on Friday that reaching that Modi’s $5 trillion target “is dependent in large part on achieving real GDP growth of 8% a year, which we think is unlikely.”

India’s stock markets fell after the budget speech, responding primarily it appears to Sitharaman’s proposal of increasing the minimum public shareholding in listed companies to 35% from 25%, threatening a wave of new issuance.

Sitharaman said the government has asked the Securities and Exchange Board of India to consider the proposal, but did not give many other details.

Shares of Tata Consultancy Services Ltd was the biggest drag on the index, falling as much as 4.6% in afternoon trade. The country’s IT index was down 2.3%

“For a company like Tata Consultancy Services, if they are to raise the public holding to 35%, they will have to sell stocks for billions of dollars. This will have a lot of practical difficulty – it was not well thought out,” said VK Vijayakumar chief investment strategist at Geojit Financial Services.

Abhimanyu Sofat, head of research at IIFL Securities Ltd, said: “This budget is a mixed bag, the increase in excise duty for petrol and diesel will stoke inflation.”