From Poverty to Prosperity: How a Manipur Village Became a Model in Development

Residents of Nongpok Sanjenbam have come together to bring about economic and social transformation, enjoying the benefits in the process. 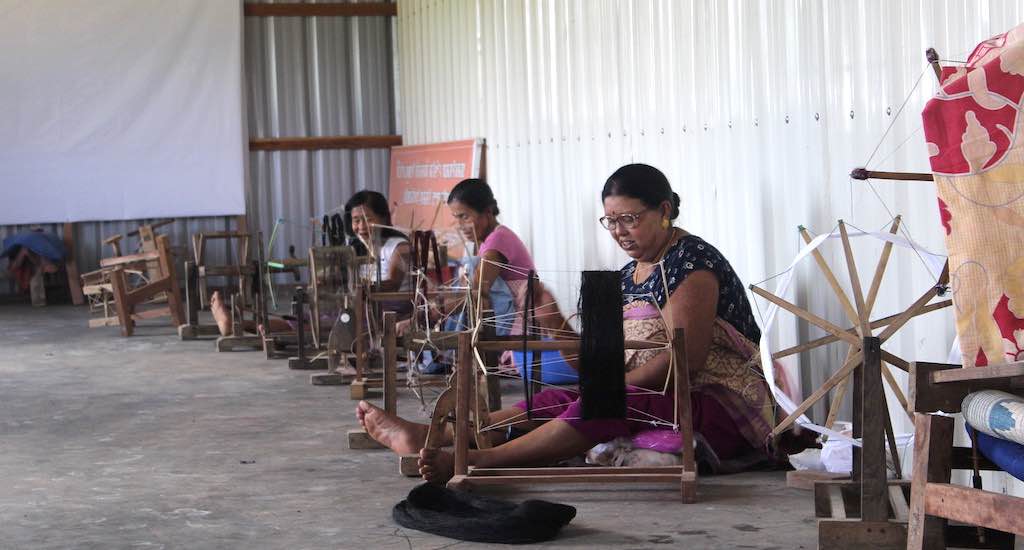 Spinning and dyeing works, integrated in the weaving unit, help the women produce traditional garments that are still in demand Credit: Ninglun Hanghal/Villagesquare.in

Imphal East, Manipur: Nongpok Sanjenbam village, about 15 km east of Manipur’s capital city Imphal, is clean, with a lot of greenery. Spread over ten acres of land, a weaving unit and a poultry farm provide employment to most of the villagers.

The village in Imphal East district was mired in poverty, lacking basic facilities. Most of the villagers worked as agricultural laborers. Presently it is a model in development, as it ensures sustained economic growth through various programmes, involving the community.

Nongpok Sanjenbam has about 135 households, with a population of about 500. It has Khunou, Khullen, Sangsabi and Kambongput colonies. As a pilot, Langei project adopted the Khunou colony. Telem Arunkumar (42), a native of Nongpok Sanjenbam village, who had a successful business in Imphal, returned to his village to develop the same. He brought the villagers together and initiated the Langei project, langei meaning pool of wealth. The motto of the project is ‘together we can’.

Initially, many villagers thought that he had an ulterior motive, when he discussed his ideas for developing the village into a sustainable development model. Being a native of the same village subsequently helped him connect with the village administration council and the community. Once convinced, the villagers started participating in the project. The village council donated ten acres of unused community land for the project. The villagers helped the Langei project take off, by helping with all the planning and construction activities.

Around 200 women were at the looms in a huge hall, weaving the phanek, the traditional women’s wear, besides other traditional clothes. The women need no training, as they are skilled traditional weavers, their skills having been passed down through generations. Langlei chose loin loom weaving as the primary income generation activity, as the women are adept at weaving on the loin looms. This not only generates income, but revives the traditional weaving, that was slowly disappearing, with the onslaught of modern technologies in weaving. 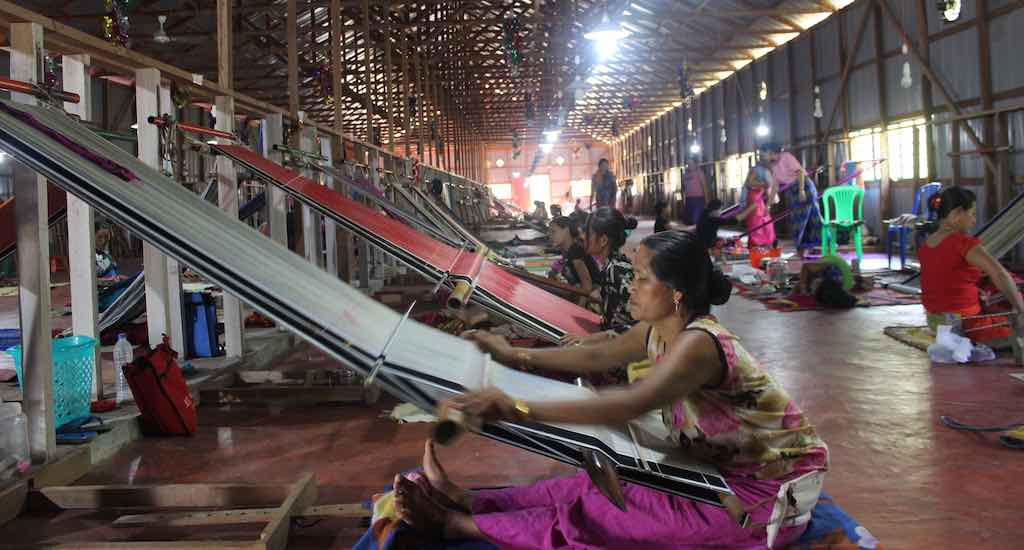 The weaving unit of Langei project in Nongpok Sanjenbam village not only provides employment to the women but also sustains traditional weaving. Credits: Ninglun Hanghal/Villagesquare.in

Moreover, the products are in good demand. “One phanek fetches around Rs 2,000,” one of the weavers told VillageSquare.in. Dyeing and making yarn have also been integrated into the weaving unit.

Earlier every household had a loin loom but not now. In the Langei unit, there are more than 150 traditional looms. “We make about 40 phaneks everyday,” said Arunkumar. This are sold in and around Manipur, sometimes in other cities as well.

Close to the weaving unit, at the foothills, there is a large pond with about 5,000 ducks. Close by is a chicken farm, where an equal number of chickens are being reared. The farm has separate hatching units with incubators. Every day, the farm supplies about 1,000 eggs to Imphal, bringing sustained income.

The farm provides employment to about 30 villagers. Though most of the villagers are engaged in the Langei works, the project envisages independent economic activity for the men, specifically livestock rearing.

The village did not have drinking water facility. At present, a reverse osmosis plant that can treat 2,000 liters per hour supplies drinking water. The water is supplied to every household free of cost.

If a household needs more water, as in the case of functions and the like, a token amount is charged, to prevent misuse. “This is the first of its kind drinking water supply model in Manipur,” Arunkumar told VillageSquare.in. In line with Swachh Bharat Mission, residents of Nongpok Sanjenbam village take up sanitation and cleanliness drive voluntarily, in addition to waste management. Biodegradable wastebaskets made of cane and bamboo are kept at roadsides and key places. The village is free of open defecation, claimed Arunkumar. The poultry farm in Nongpok Sanjenbam village, where chicken and ducks are reared, supplies eggs to Imphal every day, providing employment to the villagers. Credit: Ninglun Hanghal/Villagesquare.in

Nongpok Sanjenbam has a solar street light system in the Khunou colony and the lanes of the village. A total of 350 streetlights have been installed, to ensure safety and security. The street lights have a central control system. “In villages, people, especially women, do not venture out in the dark , so this helps in better mobility of the villagers,” said Arunkumar. In order to ensure safety and security, Langei project has installed CCTV cameras in key locations. The village has 32 such CCTVs that monitor the entire village round the clock. This has reduced social ills such as alcoholism, and theft.

Public address system has been installed for communication and information sharing. This is also used for mobilizing the public. A series of loud speakers installed at key locations is connected to the main administrative office. This helps in emergency situations. “When we observe something unusual in the CCTVs, we make a call through the PA system,” said Arunkumar.

Under the Langei project, a Langei Sports Academy has been started. More than 100 youth in the age group of 8-18 years are enrolled in the sports academy, half of them being girls. “The objective is to nurture young talents,” Arunkumar told VillageSquare.in. “All those enrolled in the academy have been adopted by the Sports Authority of India, under their ‘Come and Play program’.” Three of the players from the academy play in the under-19, East Bengal football team.

The village has a large playground for the youth. Every day a bus takes the young sportspersons to Khuman Lampak Sports Stadium in Imphal, so that they can hone their skills under expert guidance. Future plans for the village includes a school, a primary health center, a biogas plant and creation ecotourism centers.