The recent workers' protest in the capital demanding critical reforms, especially in the informal sector, has been largely ignored by the mainstream media. 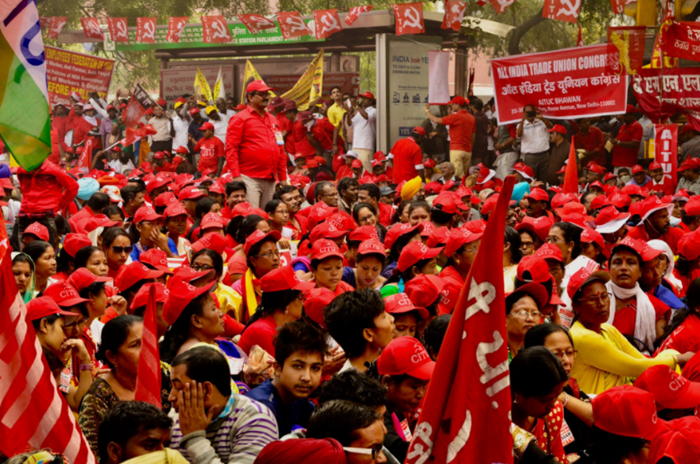 One lakh workers from across the country in New Delhi on a three-day protest against the Modi government’s anti-worker policies. Credit: Twitter/@rebel_politik

Several national trade unions organised a massive three-day protest outside the parliament between November 9 and 11. Hundreds of workers participated in the demonstration, expressing disaffection and anger against the government. Such a massive demonstration, one would reasonably expect, would lend itself to media coverage. Yet, the protests were largely ignored, or at best, shoddily reported in the national media.

It can be argued that the absence of media coverage of the protest is a symptom of a larger malaise that has debilitated the media. There is indeed merit in the argument that the increasing influence of business and politics on the media has eroded its integrity, affecting objective reportage and leading to a neglect of sustained and systematic coverage of workers’ and peasants’ issues.

There is no doubt that over the last two decades, there has been a steady decline in media reportage of labour issues. As a matter of fact, the entire mainstream media – barring less than a handful – have collectively done away with the labour beat. Labour reporting is a rarity today, labour reporters an extinct species.

The gradual disappearance of labour reporting has led to a vacuum in our understanding of changes that have taken place in the workplace since economic liberalisation was ushered in by the Narasimha Rao government in 1991. Globalisation and economic restructuring have drastically affected and changed the lives of workers in the formal, and particularly, informal sectors. The voices of workers are fast vanishing from the public discourse and from the cultural spheres.

Instead, the trend in the media largely has been to confine labour reportage to the context of business and economic reforms. A rare incidence of violence by workers, on the other hand, gets overwhelming media coverage. For instance, most newspapers, on their front page, extensively reported the violence that erupted at Maruti’s Manesar plant in July 2012. The incident left a company executive dead and many injured. At the same time, there remained a gap in our knowledge about the conditions that led to the outbreak of violence. For instance, there was hardly any systematic media reporting on the long agitation by Maruti workers at the Manesar plant demanding better work conditions. In the absence of such reportage, the incident of violence appeared to have taken place in a vacuum.

It is in the context of this larger narrative that we have to locate the lack or absence of media coverage of the three-day-long mass agitation in New Delhi. The programme was to kick-start an action plan consisting of phased multi-pronged industrial strikes and hundreds of protests across the country in the ensuing months. The agitation will continue until February next year.

Through these strikes and protests, the trade unions hope to draw the attention of the government to the attrition of labour rights, deeply affecting the livelihood and working conditions of workers. The Bharatiya Janata Party-led ruling regime, in the last three-and-a-half years, has pushed workers to the margins. It’s not that previous governments had shown any particular concern or regard for workers but the Narendra Modi government’s public and aggressive pursuit of liberalisation has sharpened existing challenges before the working classes. 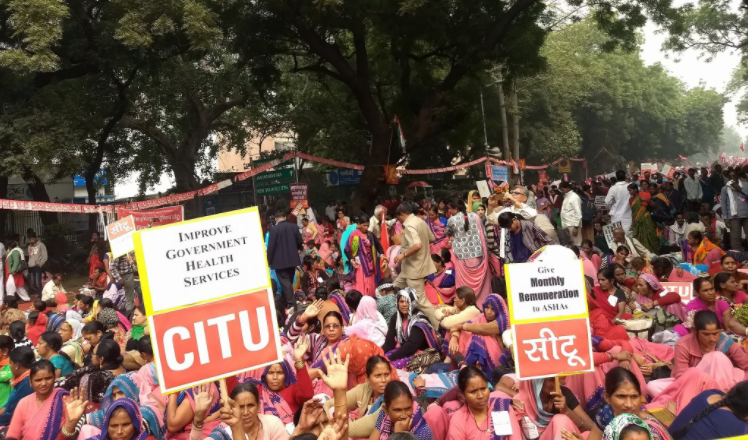 The Modi government has been planning to introduce a new regime of labour laws for more than two years now. Media reports indicate the Bill is almost ready to be sent to the cabinet. The government has drawn up five labour bills to replace as many as 40 existing bills. The five bills are Industrial Relations Code Bill 2016, Wage Code Bill 2016, the Small Factories Bill, the Shops and Establishments (Amendment) Bill and Employees Provident Fund and Miscellaneous Provisions (Amendment) Bill.

Corporates and pro-economic reform lobbies want the government to rationalise existing labour laws. One of the main objectives of introducing labour law flexibility is to ease the present hire and fire rules by amending the highly contested 1947 Industrial Disputes Act. Currently, it is mandatory for firms with 100 or more workers to seek the government’s permission for retrenchment under the Industrial Disputes Act. Also, any seven or more members of a trade union can apply for registration of the trade union.

The draft Bill under consideration proposes to make retrenchment easier for companies employing up to 300 workers, in addition to making it tougher for workers to form trade unions. The Bill proposes to combine Industrial Disputes Act, 1947, Trade Unions Act, 1926 and Industrial Employment (Standing Orders) Act, 1946 into a single code.

What are the agitating workers demanding? Surely, not the moon. They are demanding curbs on price-rise, decent education and healthcare, employment generation and minimum social security. These are basic demands that any citizen can raise, as it is the duty of every democratically elected government to meet them.

The workers, including the vast majority in the informal sector, especially Dalits, Adivasis and women, are indeed the backbone of the entire economy. They provide manual labour for the country, work in exploitative conditions. Yet, their condition does not get the attention – either of governments or of the media – that it deserves. On the contrary, workers are usually treated with contempt by every ruling political regime. It is, however, also true that the working class as a collective, so far, has not been able to adequately pose a real, serious and coherent challenge to the ruling political regimes.

The question is: For how long can this go on? Certainly not forever, as history tells us.