The plight of salaried employees has worsened since the lockdown, with a net loss of 18.9 million since the coronavirus pandemic arrived on Indian shores.

New Delhi: As the employment crisis in India’s informal economy slowly abates with the resumption of normal activity, the public spotlight is quickly turning to the damage caused to formal sector jobs.

New data from the Centre for Monitoring Indian Economy (CMIE), an independent body that measures and tracks economic indicators, has said that salaried jobs took a big hit during the COVID-19 lockdown, with the total loss estimated to be at 18.9 million during April 2020-July 2020.

“On a net basis, the plight of salaried employees has worsened since the lockdown began. In April, they lost 17.7 million jobs. But by July, their losses had swelled to 18.9 million,” CMIE boss Mahesh Vyas noted in a recent post. 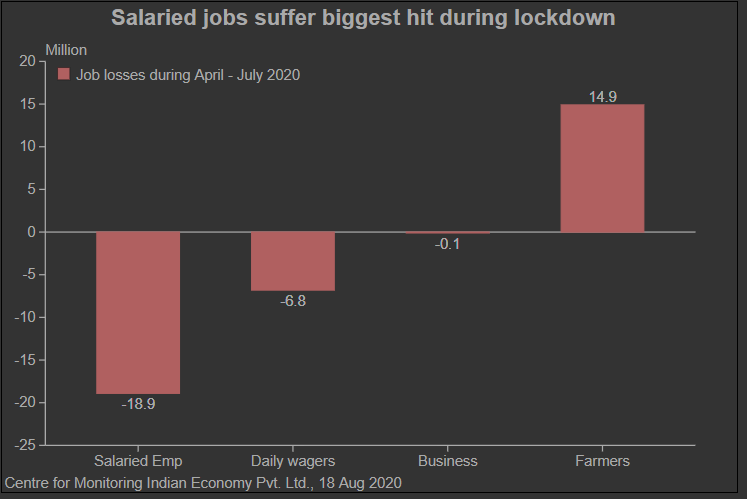 “While salaried jobs are not lost easily, once lost they are also far more difficult to retrieve. Therefore, their ballooning numbers are a source of worry. Salaried jobs were nearly 19 million short of their average in 2019-20. They were 22% lower than their level in the last fiscal year,” the post said.

This is in sharp contrast to informal and non-salaried jobs, which have shown improvement during the same period, increasing to 325.6 million in July from 317.6 million last year, an increase of 2.5%, the post noted.

At the beginning of the lockdown, informal jobs – particularly daily-wage labourers, hawkers and small traders – were worst hit in April.

“Of the 121.5 million jobs lost in that month [in April], 91.2 million were among these [informal jobs]. This category of employment accounted for about 32% of the total employment but it suffered 75% of the hit in April,” CMIE data showed.

As the lockdown ended and the Indian economy started opening up, these jobs also started coming back quickly, again largely in the informal sector.

“While jobs have recovered, this recovery has left out healthier, salaried jobs. In this sense it is an unhealthy recovery.”

Anecdotally, media reports have been awash with painful stories of the salaried class – layoffs across sectors, salary cuts and delayed increments.

But beyond this, there have been two strong data points on how badly formal employment has been hurt.

Firstly, according to corporate filings from 40 leading BSE 100 companies for the quarter ended June 2020, employee costs reduced sharply in the services sector and non-essential manufacturing.

According to a separate analysis by MorningContext, more than half of the 30 companies which comprise the benchmark Sensex spent less on employees in the June quarter.

“Reliance, which saw its profits more than double, saw its employee expenses reduce 14.68%, the highest among the country’s most valuable companies,” it said.

Now, a drop in employee expenses doesn’t automatically indicate lay-offs or net job losses – it could merely mean that salary cuts have been imposed (as is the case with Reliance) or that some permanent jobs are now being done on a contract basis (both within or outside the company).

Secondly, a closely-related datapoint is the sharp rise in withdrawals by Employees’ Provident Fund Organisation (EPFO) subscribers – which is again limited to formal sector employees.

A separate report by the Economic Times, which quoted unnamed EPFO officials, said that as much as Rs 30,000 crore had been withdrawn from April 2020 to July 2020 by 8 million EPFO subscribers.

“Of the total withdrawals, nearly 3 million beneficiaries withdrew upwards of Rs 8,000 crore under the Covid window while the rest Rs 22,000 crore was a general withdrawal by 5 million EPFO subscribers, mainly as medical advance,” an EPFO official told the business newspaper.

The substantial increase in withdrawals is likely sparked by three factors, according to government sources. These are: pandemic-related job losses, salary cuts and medical expenses.

A sharp rise has been recorded in withdrawals by subscribers of the Employees’ Provident Fund Organisation (EPFO). Representative image. Photo: PTI

Will these jobs and salaries come back?

With pain aplenty in the formal sector, some analysts believe that salary cuts will be rolled back once growth recovery starts towards the second half of this financial year.

What is less clear is the state of job creation in sectors that saw the worst lay-offs – specifically in various service-oriented industries. Experts feel that there is a very real possibility that streamlined workforces will be a semi-permanent feature moving forward.

While staffing firms like Quess Corp have said that they are engaged with their clients for hiring requirements in the coming months and that the worst may be over, there is still uncertainty about job creation in specific sectors.

One optimistic datapoint in this aspect is that July 2020 recorded the highest registration of new companies in the country in more than seven years, a sign that some believe may be of reinvigorated interest by investors and plans by local entrepreneurs to start new business ventures.

A total of 16,487 were incorporated in July 2020, according to data from the corporate affairs ministry. This is the highest since January 2013—the maximum available historical data—when 5,508 companies were registered.

While the total authorised capital of all companies set up in July is just over Rs 2,000 crore – not really the amount required to set off a new wave of job creation – CMIE’s Vyas believes it is an encouraging sign.

The spike in the number of companies registered merits a lot of attention, he told one media publication. “However, whether it is indicative of investor interest can only be known after investigating it. Setting up a company is an act of commission and I would not ignore this data.”