Despite widespread violations of workers' entitlements, the BJP government as well as the opposition have shown nothing but apathy. 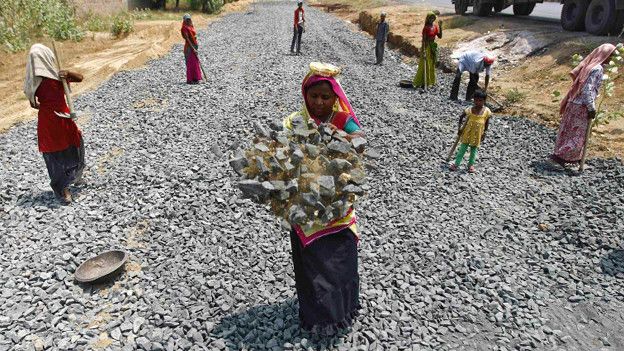 The BJP-led Jharkhand government has coined a new slogan, “Har haath ko kaam (Give every hand work)” to show its commitment on providing employment to people of the state. The slogan assumes special significance for Jharkhand, where the ratio of working age population migrating to other states was the highest in the country in 2015-16, as per the Economic Survey 2016-17. Issues of unemployment and out-migration are routinely raked up during elections by all three major political parties in the state – BJP, Indian National Congress and Jharkhand Mukti Morcha (JMM).

According to the fifth annual employment-unemployment survey of 2015-16, the unemployment in the state – pegged at 7.7% – was higher than the all-India average of 5%. In the absence of adequate formal employment opportunities, the Mahatma Gandhi National Rural Employment Guarantee Act (MGNREGA), which entitles rural households to 100 days of unskilled manual labour every year, continues to be a lifeline for workers in the state.

The implementation of the MGNREGA has had a fairly chequered history in Jharkhand. There have been sporadic initiatives under various governments such as kaam mango abhiyans, pilot social audits, participatory exercises for decentralised planning of schemes and so on to improve the implementation of the Act. Several assets useful for the rural economy such as roads, farm ponds and wells have also been constructed over the years. But large-scale violations of workers’ entitlements, such as the right to get work on demand and wages within 15 days, have always been a routine affair in the state.

Jharkhand has seen six different governments between 2006 (the inception of MGNREGA) and 2014, led primarily by various combinations of the three major parties (BJP, Congress and JMM). Past governments have shown negligible commitment to check the violations of workers’ rights. Some recent initiatives in MGNREGA such as the construction of farm ponds and the Yojana Banao Abhiyan have seen significant involvement from the ruling dispensation. But the low scale of work and the continuing denial of rights under the Raghubar Das government since it came to power in 2014 indicates that political apathy towards MGNREGA workers continues.

There has been a gradual increase in the scale of MGNREGA work, from 436.22 lakh person days in 2013-14 to 707.59 lakh person days in 2016-17. However, this is far from enough to meet rural households’ needs. As per the Socio-Economic Caste Census 2011, more than 50% of rural households in Jharkhand depend on casual manual labour to make a living. In 2016-17, only about 32% of total households could get work under the MGNREGA. The average employment provided to the participating households every year has hovered at around 40 days since 2013-14, barring the financial year 2015-16, when it went up to 52 days in lieu of the extension of work entitlement to 150 days for drought-affected Jharkhand. The proportion of participating households who could get 100 days of work has seen a significant fall from 6% in 2013-14 to 2.13% in 2016-17.

The fall in the proportion of work done by Adivasi and Dalit households (comprising 44% of the state’s total rural population, as per the 2011 Census) from almost 50% in 2013-14 to 38% in the current year is deeply worrying. It stands in stark contrast to BJP president Amit Shah’s claim, after his recent visit to Jharkhand, that the party is committed to addressing the needs of Adivasis.

Denial of work on demand

MGNREGA entitles workers to get work within 15 days of applying, but it remains challenging for workers in the state to get dated receipts of their application for work from frontline functionaries and get schemes started on demand. Circulars issued by the state government in the last two years indicate an administrative focus on stricter enforcement of the right to work, but massive delays in opening an adequate number of schemes to meet the demand for work continue. In the absence of dated receipts of work applications, it is also not possible for workers to claim their right to unemployment allowance against the delays. A silver lining in this grim scenario has been the payment of an unemployment allowance, an entitlement which is rarely given across the country, to workers in ten blocks over the past year and a half.

A blatant violation being reported from across the state is the deletion of households’ electronic job cards. For getting work under the MGNREGA, all interested adult members of a household have to be enlisted on the family’s electronic job card on NREGASoft (the online application used for implementation of the programme). More than six lakh electronic job cards have been deleted in the state since 2016-17. They have been deleted as part of government’s verification drive to weed out fake and duplicate job cards, organised on the instructions of the Union Ministry of Rural Development. But reports from across the state suggest that job cards of many households that have worked in the programme or are willing to work have also been deleted by the local administration, leading to a violation of their right to work. The reasons cited by the local administration for deletion of many of these job cards are “unwilling to work” or “other”. The Jharkhand government is yet to disclose the number of fake and duplicate job cards weeded out in the exercise. 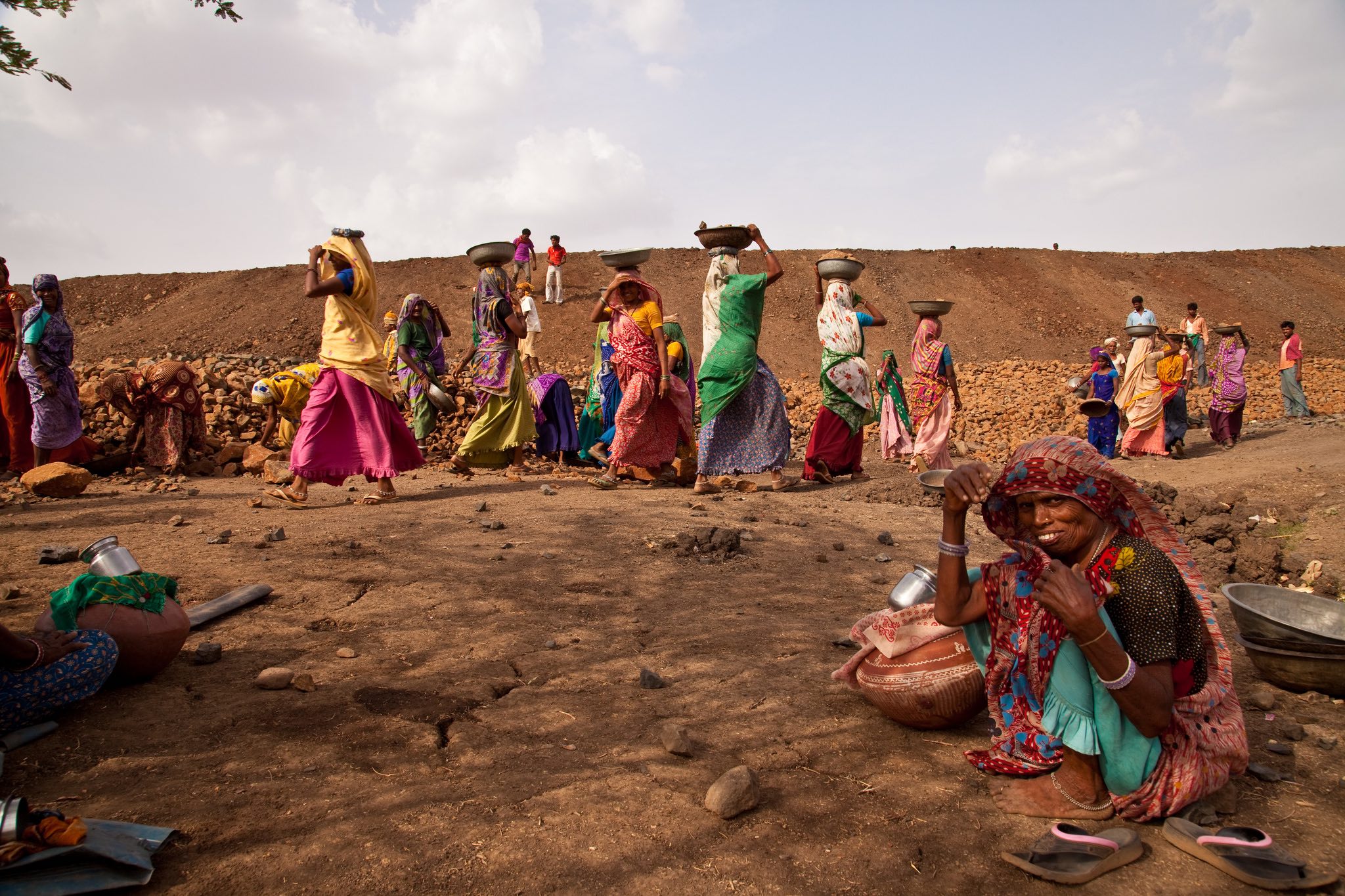 Delays in the payment of wages continue to exist on a staggering scale in the state. The government recently claimed that 94% of workers received their wages on time in 2017-18. The basis of the claim is the Management of Information System (MIS) of MGNREGA, in which the payment of wages is considered to be made on time if the fund transfer orders (FTOs) (electronic vouchers of payments to be made) are approved within 15 days of closure of muster rolls.

As per the MIS, there has been a gradual increase in the ratio of on-time approval of FTOs from 67.86% in 2014-15 (the year the electronic payment system became fully functional) to 94% in the current year. This does indicate a general improvement in adherence to the timelines of various processes related to the payment of wages, such as the entry of filled muster rolls in NREGASoft, the generation of wage lists and so on, till the approval of FTOs. But the figure fails to reflect the massive delays faced by workers, as the MIS presents only the partial truth.

The calculation of on-time payment in the MIS does not take into account the time taken for wages to be credited to workers’ bank accounts after the approval of the FTOs. A recent study, based on 3,446 gram panchayats spread across ten states including Jharkhand, found this delay to be nine days on an average for the state for the financial year 2016-17.

Also read: Claims of Jharkhand’s Success in NREGS Implementation Are Far From Reality

Apart from this, massive delays that are not even captured in the MIS are being caused by the failure of the state to cope with the increasing dependence on technology during the implementation of the Act and poor accountability from the local administration towards MGNREGA workers. Reasons such as seeding of incorrect Aadhaar of workers in the MIS, mapping of incorrect bank account with Aadhaar, working without one’s name in the electronic muster rolls and closing schemes in the MIS without completing wage payments are instrumental in causing such delays. For example, in 2016-17, large numbers of farm pond schemes in which wages were still to be paid to workers were marked as “complete” in the MIS to exaggerate the number of completed ponds (payments cannot be made in a scheme if it has been marked as “complete” in the MIS). It left several workers across the state without their wages.

Regardless of the political party in power, there has been little acknowledgement by past governments of the disruption in services for beneficiaries caused by technocratic interventions in development programmes. Jharkhand’s early embrace of Aadhar-based payments and biometric authentication is a case in hand. The trend continues under the current dispensation. The political leadership seems to be oblivious to the violations caused by the technocratic diktats of the Union Ministry of Rural Development in the MGNREGA.

Along with the denial of timely work and wages, violations of other entitlements of MGNREGA workers such as compensation for delay in wages, timely redressal of grievances and so on continue unabated in the state. The State Employment Guarantee Council, headed by the chief minister and comprising of workers, political representatives, bureaucrats and civil society members, is supposed to meet at least once in every six months, to review the implementation of the Act in the state. The council has met only once in the last three years. Many decisions of that meeting such as ensuring payment to workers in seven days and distributing cycles to workers are yet to be implemented.

Social audits of MGNREGA schemes, conducted by the Social Audit Unit in the last one year, have found evidence on the embezzlement of funds and the role played by a nexus of local administration and contractors. There is little doubt that the embezzlement leads to partial payments to workers and also the denial of work. It is also an open secret that the nexus thrives with political support, as many of these contractors are also active members of local units of various political parties.

Tacit support for the nexus may be one of the reasons for the lack of political discussion in the state, barring a few sporadic instances, on violations of workers’ entitlements. The list of questions debated in the last two sessions of the Jharkhand legislative assembly indicates negligible discussion on issues of MGNREGA workers in the assembly. There has virtually been no political protest by opposition parties against the disparity between the MGNREGA wage and the minimum wage of the state. The most recent example of the political apathy of opposition parties is their silence over the issue of non-payment of wages to lakhs of workers for almost a month now. All FTOs of the state are pending since September 15. The lack of concern of the BJP-led central government for MGNREGA entitlements is also not working in favour of workers of the state.

If the Das government wants to move beyond mere slogans and set a political precedent of “har haath ko kaam” in the state, the first step can be ensuring the right to work of all rural households under MGNREGA. Issues such as severe shortage of MGNREGA functionaries and poor digital infrastructure and internet connectivity at gram panchayat offices will have to be addressed. The chief minister will also have to demonstrate political commitment to break the corrupt nexus thriving in blocks, rein in the contractors and make the local administration accountable.

Siraj Dutta is based in Jharkhand and has been working on the MNREGA for the last six years.