Jan Dhan Yojana: One Rupee Balance and the Dormancy-Duplication Problem

Financial inclusion, when executed on a massive and essentially rushed scale, comes with two major issues. 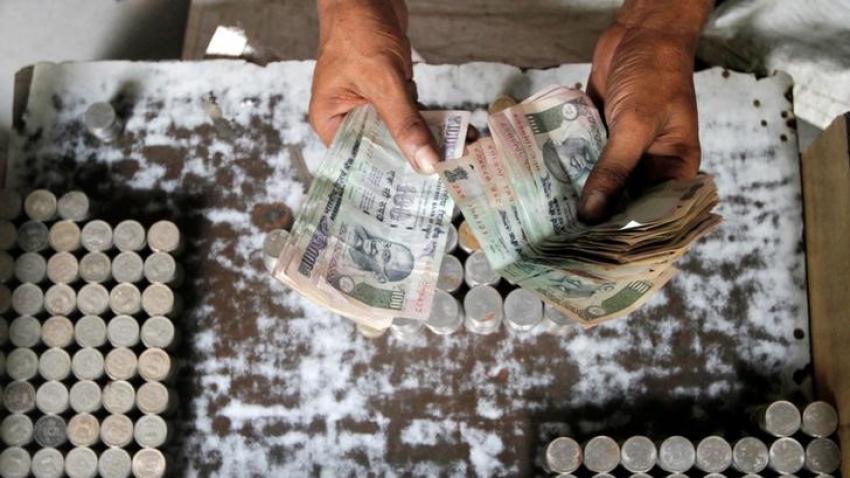 Bank of Baroda and Bank of India have all but admitted that mass Re 1 deposits were done to reduce the number of zero-balance PMJDY accounts. Credit: Reuters

New Delhi: Two public-sector banks have confirmed that their officials deposited Re 1 in the accounts of Pradhan Mantri Jan Dhan Yojana (PMJDY) users – ostensibly to reduce the number of zero-balance bank accounts – according to a news report.

The Indian Express on Wednesday reported that the Bank of Baroda and the Bank of India have all but admitted to the department of financial services that mass Re 1 deposits were done to reduce the number of zero-balance accounts opened under the government’s flagship financial inclusion scheme.

The report comes on the back of a larger investigation undertaken by the news publication last year, which showed that 18 public sector banks and their 16 regional rural subsidiaries held 1.05 crore Jan Dhan accounts with deposits of Re 1.

The pressure on public-sector banks to cut down on zero-balance accounts are a part of the problems emanating from the manner in which the Narendra Modi government’s Jan Dhan financial scheme was conceived and implemented.

Over the last three years, 29.6 crore accounts have been opened, 17.7 crore of which are in rural areas. Financial inclusion, when executed on a massive and essentially rushed scale, comes with two major issues.

At an operational level, Jan Dhan accounts are prone to problems of zero balance, duplication and dormancy. At a larger macroeconomic financial inclusion level, a closely-related problem is the question of whether Jan Dhan users eventually start conducting genuine financial transactions and slowly transition towards engaging with more complex financial products such as insurance or formal credit.

Fortunately, three recent academic studies and recent RBI data shed light on the progress that PMJDY has made with regard to both these issues.

Zero-balance PMJDY accounts are symptoms of the larger problems of dormancy and duplication. At its worst, these accounts are indicative of a target-led approach that favoured numbers over genuine financial inclusion. In the best-case scenario, it shows that certain account holders may not need (or believe they may not need) the formal financial system.

Finance minister Arun Jaitley recently stated that “zero balance accounts… have come down to 20% from 77% in three years.” Unfortunately, this can’t be verified because the official PMJDY website hasn’t updated its “trend of zero balance accounts” after December 28, 2016.

The ‘24.13%’ number assumes further significance because we know now that between November 9, 2016 and December 30, 2016, a massive Rs 66,000 crore flowed into all of India’s PMJDY accounts as a result of demonetisation. This inflow was nearly double the amount that was already being held in all of the country’s PMJDY accounts.

This essentially means that demonetisation – the forced invalidation of high-value banknotes – didn’t drastically reduce the number of zero-balance accounts.

If the total value of PMJDY deposits doubled within the space of two months – but the percentage of zero-balance accounts actually went up minutely during roughly the same period – it is highly likely that a majority of the PMJDY zero-balance accounts are duplicate accounts, owned by people who already operate a separate, non-PMJDY account.

If the percentage of zero-balance accounts has come down to below 20%, as Jaitley suggests, it could be that some of this is because people have stopped using their other accounts and have started using their PMJDY accounts instead.

A May 2017 study by Manuela Kristin Gunter of the Overseas Development Institute (ODI) – which has analysed data based on two sets of surveys – alludes to this problem of trying to measure genuinely new financial activity in the context of potential duplicate accounts.

“The fact that many PMJDY accounts could be second accounts raises interesting policy questions. One, it could explain why about one quarter of PMJDY accounts currently still have zero balance. Two, it suggests that activity measured in PMJDY accounts may reflect substitution away from other accounts,” Gunter writes.

Another recently-released research paper by academics at the Indian School of Business and University of Maryland – which tracked activity in 3,000 PMJDY accounts from August 2014 to October 2016 – also addresses the pressures that the PMJDY programme might have exerted on public-sector banks.

It crucially notes that the “fraction of zero balance accounts… decreased from 67% to 23.2% between 2015 and 2016”. However, the drop is much greater when it comes to public-sector banks (as the Indian Express has shown) and significantly less when it comes to private sector banks.

While the number of private sector PMJDY accounts is lesser, when compared to public-sector banks, it is telling that the zero-balance account rate (34.7%) remains high. 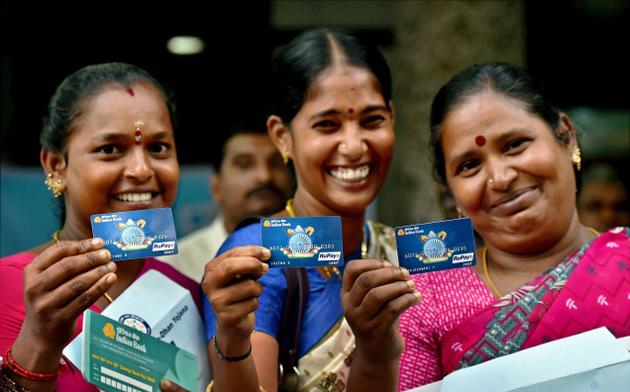 The earliest study on the rate of duplication in the PMJDY scheme – where people who opened a PMJDY account already operated another bank account – came from Microsave in 2016 which stated that customer account duplication stood at 33%.

Although the Microsave and ODI studies don’t throw up the same figures – a result of different sample sizes and varied demographics – it’s clear that a not-insignificant portion of PMDJY account holders also may have another non-PMJDY bank account.

A separate 2017 working paper by Georgetown University professor Sumit Agarwal and his co-authors – which studied 1.5 million PMJDY accounts from August 2014 to May – also reports that “81% of new consumers do not deposit any money” in the first six months after the account is opened.

While this 81% figure likely reduces when a larger time-period is taken into account, the issue of duplication and zero-balance accounts likely plays some role in this statistic.

The Chopra study backs this up by noting that “about 30% of PMJDY accounts” in its sample remain unused. For the remaining 70% of accounts, it took nearly 24 months for a PMJDY account to match the level of financial activity seen in a regular savings account.

A press release put out by the Centre in December 2016 notes that only “44.28 lakh accounts have been sanctioned OD facility of which 23.85 lakh account holders have availed of this facility involving an amount of Rs 316.56 crore”.

A 2015 study indicates low levels of inclination when it comes to financial services such as insurance. “The dominant reason for opening PMJDY accounts is to deposit savings, which is cited by 52% of account holders. The next highest reason (23%) is to avail of insurance attached to the accounts, followed by the desire to avail of direct benefit transfers and subsidies (16%),” the study noted.

As former IIM professor Charan Singh recently wrote in The Wire, there is a “significant difference in socio-economic background of people living in India and therefore there is a need for flexibility in financial schemes designed for different segments of unbanked population”.

This flexibility is yet to truly take root in the PMJDY scheme.

Finally, the question of financial inclusion and account activity is largely linked to regional trends – indicating that a central government scheme can only go so far.The ODI-Gunter study notes that while the “highest rate of bank account ownership has taken place in low income states”, the same “does not apply to active account use”. 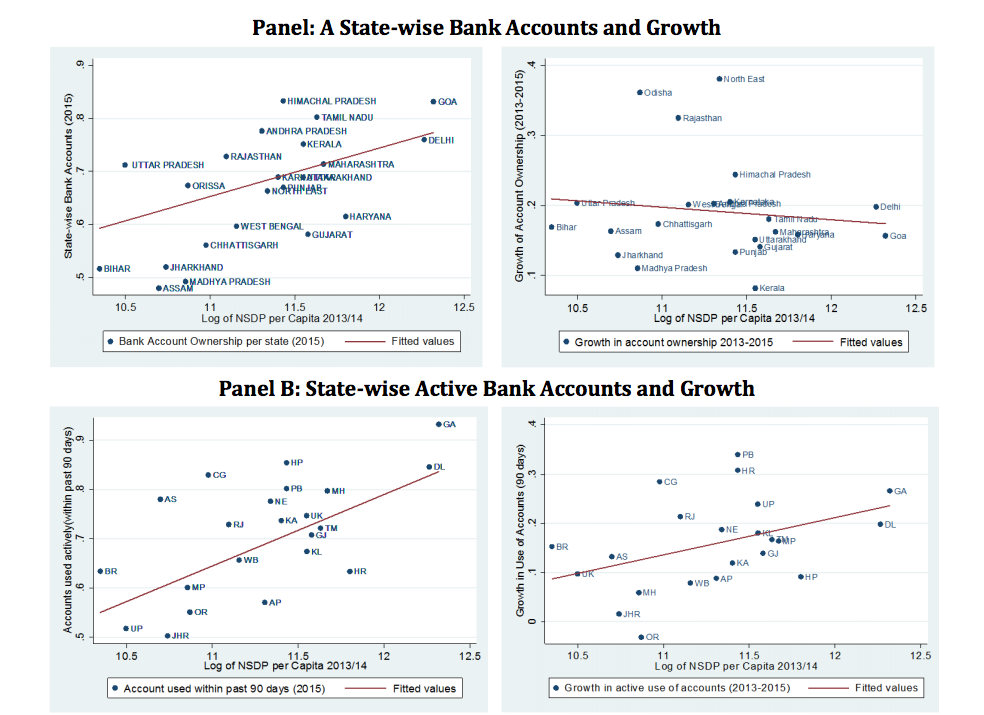 “Unlike access to accounts, growth in account use is not highest for low-income states,” Gunter notes. “This implies that use has increased among low-income states but not enough to reverse the income effect.”