In India’s growth trajectory, for over a decade, domestic private investment levels have remained consistently low and so has (domestic) manufacturing growth.

As per recent quarterly estimates, India’s growth rate slowed to 6.3% in the September quarter of 2022-23. There is evidence of a notable contraction in output of manufacturing that’s pulling down growth.

This author has previously argued that quarterly growth estimates may not reveal the real state of an economy. Quarterly estimates of GDP are rudimentary, preliminary-stage estimates computed from limited information.

Still, there is more to the estimates than projections. In India’s growth trajectory, for over a decade, domestic private investment levels have remained consistently low and so has (domestic) manufacturing growth.

There is a need to understand the endemic forces shaping these trends: consumption demand skewed towards the top 5% elite; a credit freeze in the financial system, choked by rising NPAs, poor-credit cycles now worsened by problems in implementing IBC; low, compressed wages in non-farm segments, high gender inequality in the workforce and poor export demand volume. These collectively shape India’s macro-structural fault lines.

For a historical context on the paradoxical nature of India’s long term manufacturing slowdown, see the figure below. 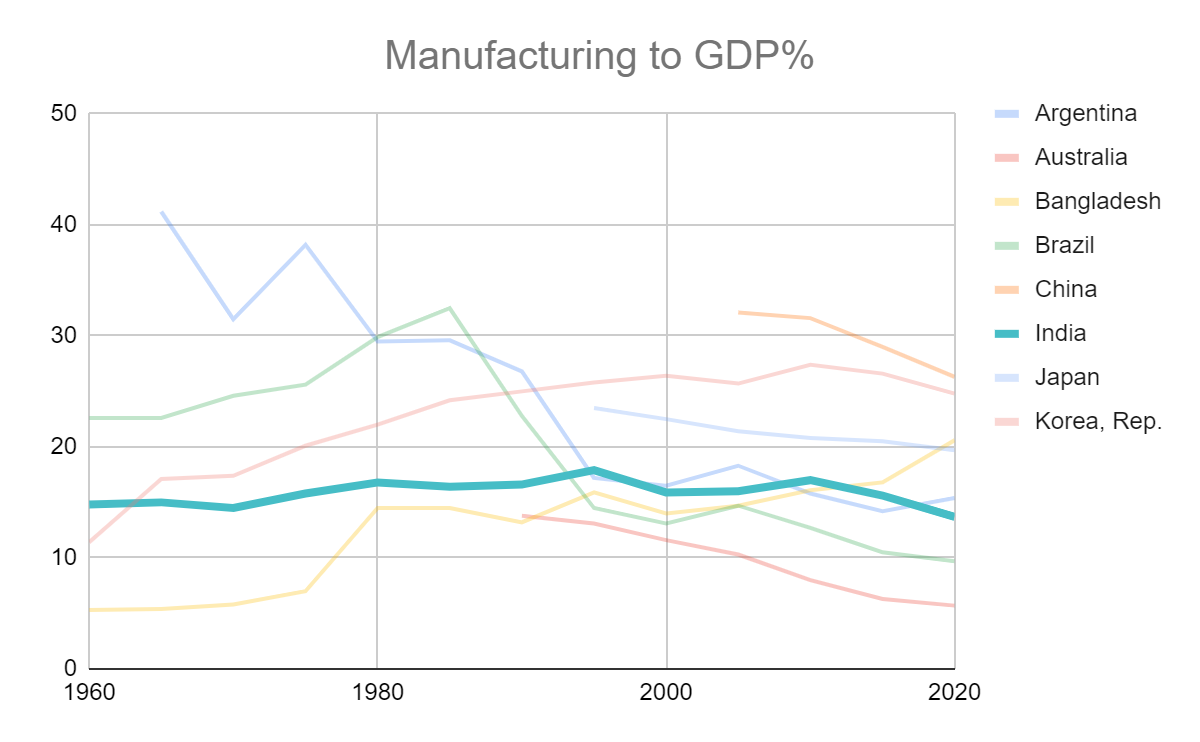 From the 1960s, our team observed the peak manufacturing to GDP (percentage) levels of all emerging market economies (and a few industrialised nations), as a relative point of comparison for India.

India’s overall manufacturing growth as a percentage of GDP remained steady over 60 years. While nations like Argentina and Brazil saw the ratio peak in the 1970s and early 80s, other nations like South Korea and Bangladesh saw this trend rate increase over decades, driving their growth story. 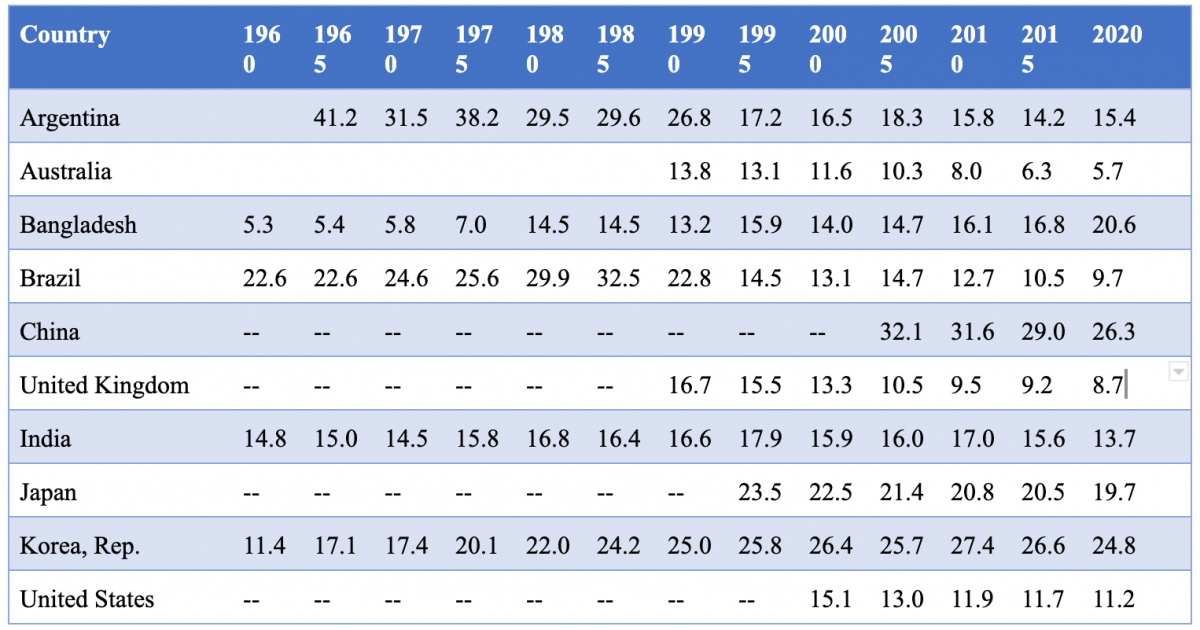 India has been facing a crisis of low productivity in manufacturing. Its manufacturing to GDP levels have remained almost the same since the 1960s, though most workers are engaged, after agriculture, in sectors linked to the small-medium-scale manufacturing landscape, particularly the MSME sector (see here).

Was this the case across sectors? Not really. As argued before, in electronics hardware manufacturing, India’s comparative advantage was first realised and then lost in the early 1990s through a series of half-baked liberalisation measures.

Also read: Pronab Sen on Why Q2 Growth Numbers Aren’t Cause for Celebration

India a case of premature deindustrialisation?

At a macro-manufacturing level, India experienced ‘premature deindustrialisation’. This was a concept anchored by Dani Rodrik to analyse how a (developing) nation may observe a sudden fall in its manufacturing-GDP ratio before achieving an optimal rate of development (resulting in a sub-optimal manufacturing scenario and a fragmented labour market).

The Performance Linked Incentive (PLI) scheme of the Modi government aimed to enhance domestic private investment into manufacturing activities. However, the response has been far from satisfactory across most sectors.

Yes, the Union government may continue pushing for more capex-based expenditure over the next few years as well to crowd private investment into manufacturing but so far, data suggests that supply-side economics is failing to attract the attention of long-term private capital investors to boost production capacity for consumer needs.

Private investment in manufacturing isn’t at a scale that the government hoped for. Plus, there’s a broken, deeply fragmented labour market where labour productivity (and wages) is at its lowest threshold across India.

The real question for the Modi government now, as it has been for some time, is:

Will it continue to pursue supply-side policy interventions in a sector which lost its competitive edge a long time ago (in some cases due to misplaced policy priorities), or is there another story waiting to be written?