Of all the trade blocs that India could join quickly, the RCEP still makes the most sense, economically and strategically. 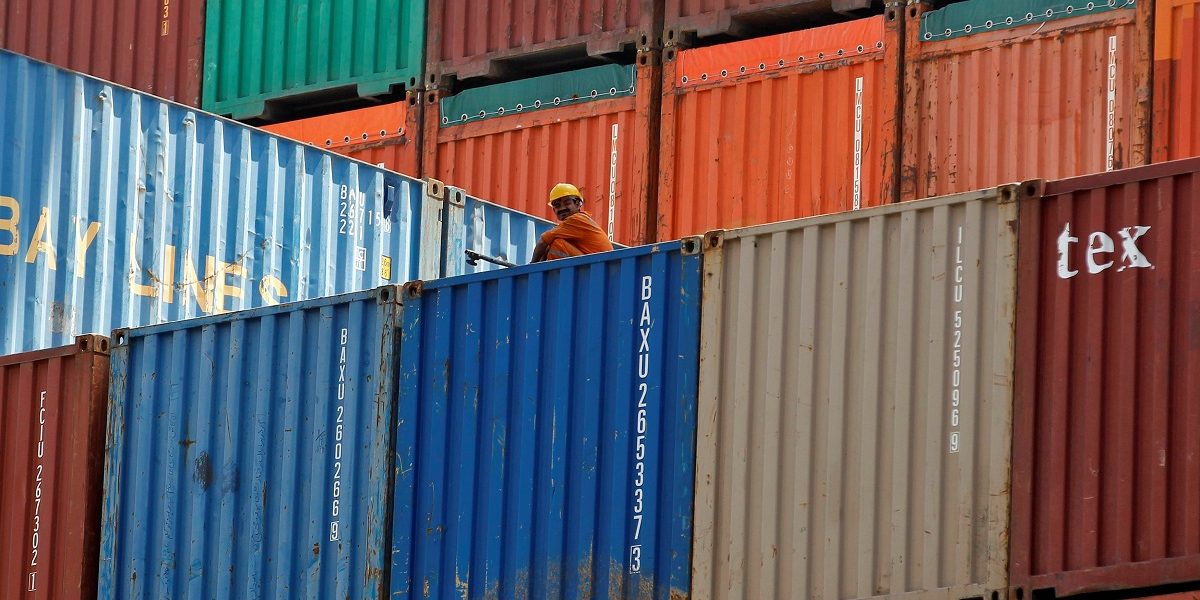 A worker sits on a ship carrying containers at Mundra Port in Gujarat. Photo: Reuters/Amit Dave

Asia takes in about 50% of India’s annual merchant exports and accounts for 60% of our imports. More than 55% of our total trade with the world is with Asia. India is very Asian.

The 15 countries party to the Regional Comprehensive Economic Partnership (RCEP) in Asia account for 37% of our global exports and 42% of our global imports. About 40% of our global trade is with RCEP countries. This results in an annual deficit of about $100 billion; we should seek to lower this deficit.

For perspective, the US accounts for 20% of our exports and 8% of our imports. Our trade with the US is only about 10% of our global trade. The US gives us a trade surplus of $22 billion annually, which we don’t appreciate enough.

RCEP countries constitute 30% of the global population (not including India) and have a combined GDP of $26.2 trillion, which accounts for 30% of total global output. It is both the world’s largest trading bloc as well as the fastest growing region on the globe.

Why is India not in the RCEP pact?

In November 2019, Prime Minister Narendra Modi went to Beijing for an RCEP summit where India was all set to sign the trade pact. However, at the last minute, Modi discovered a Gandhian talisman that did not permit India to join.

The talisman says: “Recall the face of the poorest and the weakest man [or woman] whom you may have seen and ask yourself if the step you contemplate is going to be of any use to him [her].”

Unless you think Ambani or Adani represent the faces of the “poorest men” in India, Modi’s argument for not joining the RCEP is open to questioning. Exports are labour intensive; they create jobs. Exports are what keeps us alive and solvent as an economy. In India, it is the poor who export, mostly their labour and the rich who import, mostly goodies or gold. But Modi’s decision locked Indian exports out of 30% of the global market. It is hard to see how that helps the poor.

Fundamentally, the RCEP was designed to eliminate 90% of tariffs in the 15-member trading bloc and to bring about a convergence in the economies of member countries, thus stimulating growth and employment.

In a trade bloc, firms can set up at any site in the bloc where their costs are the lowest. The lowest tariff market access to all member countries is guaranteed from any location.

Lower costs enhance productivity within the bloc. Markets become larger than before, economies of scale kick in and employment across countries converges. What’s more, firms and consumers are exposed to new technologies and commercial contracts and practices are uniform.

The benefits of joining a trade bloc, especially one in which India would be the second largest player (with the fastest growing economy by far, since China’s has plateaued), should be obvious. It would have been an excellent strategy to make India the growth engine of the globe.

What made Modi baulk at a done deal?

There are two major downsides to joining a free trade agreement (FTA).

Firstly, your local players, the Ambanis and Adanis, would have to compete with the Jack Mas and Liu Chuanzhis of the world; that’s not an easy thing to contemplate.

Second, there is a steep learning curve would you face in order to export your products, build brands and create markets in other member countries.

Local entrepreneurs would no longer be able to take shelter from competition behind tariff walls. The single biggest hurdle to India’s joining the RCEP was not that India’s dairy industry would be wiped out by New Zealand – that was just a scare story – but that rent-seeking tycoons would not be able to use their leverage with the government to tilt the playing field in their favour. 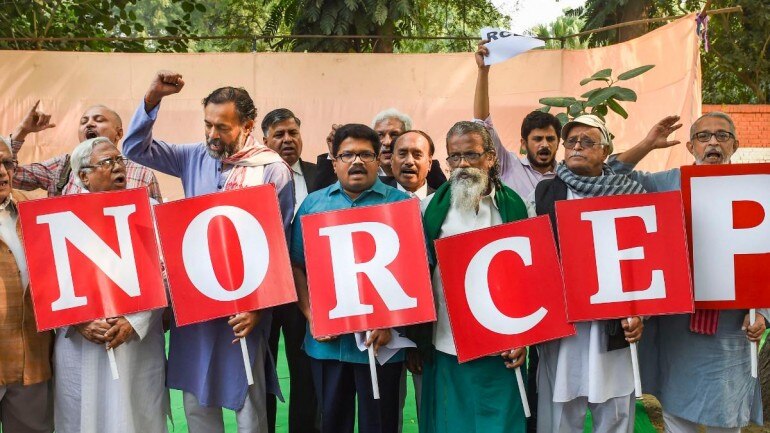 India’s business elites lack the confidence to tackle overseas markets, especially difficult ones like Asia where language is a barrier. Yet, they have the software services model, where our tech firms have built large, durable franchises in the US, Europe and Asia.

The brick and mortar firms – run by tycoons with old money – have never learned to compete with the world’s best and are, therefore, reluctant to launch into exports. It is not by accident that most of them are in capital intensive, rentier businesses. Tycoon-owned firms are large importers; they can sustain their profits only if an obliging client (the Union government) protects their oligopolies and fiefs.

The fundamental aim of Modi’s economic strategy is to protect local entrepreneurs from external and internal competition in order to enable them to grow bigger.

Be it demonetisation, GST or the digitisation of payment systems, along with Aadhar enabled surveillance; all these measures were designed to force commerce – and consumers – to migrate from the informal to the formal sector, where tycoons dominate the playing field. This has forced commerce and economic activity to move from the informal to the organised sector, sending corporate profits and stock markets zooming.

Squeezing the informal sector has sent tiny firms out of business, adding to the ranks of the unemployed and the poor. New job creation is virtually zero as the informal sector learns to deal with GST codes, digital payments and finding new capital. Meanwhile, many of the country’s unemployed are being pushed into Malthusian poverty traps.

With exports stagnant and private sector investment still on holiday, despite soaring profits, both growth and employment opportunities have shrunk.

What Modi has grasped of late is that a shrinking gross domestic savings rate of 30%, given an incremental capital output ratio (ICOR) of 5, can only generate economic growth of 5% to 6%, which is simply not enough to create the required number of jobs in the economy.

Modi has thus embraced the mantra of export-led growth by announcing a new Foreign Trade Policy, FTP 2021-26, which seeks to double exports from the present $450 billion (inclusive of services exports) to $1 trillion, over the next five years.

So far so good, but how can this happen?

Modi has already put some of the building blocks required to launch into an export-led growth in place. Corporate tax rates are now globally competitive, labour laws are much more flexible and the digitisation of tax collection has vastly improved economic intelligence and compliance. A huge corporate cash pile is available for new investments, provided the government can assemble a credible plan of action.

But to unleash export-led growth, some more steps are imperative.

Firstly, to export another $550 billion worth of goods and services, you need to invest $2.5 trillion in the domestic economy, over and above the existing savings which amount to $60 billion annually.

Secondly, why would anyone give you this FDI and set up a plant to make, say electronic vehicles (EVs), when you can’t export the car you make in India to any other country in the world?

We are not even a most-favoured-nation (MFN) trading partner of the US under the World Trade Organisation (WTO). We are not in the RCEP, which would enable a new firm to export EVs without duties to China, Australia, Indonesia or even Bangladesh. We don’t even have a trade deal with the EU.

Who will give us this scale of FDI we need just for the pleasure of selling to Indians? Modern firms need access to global markets to be competitive.

If you want FDI, especially at the scale you need to double exports, the first order of business is to expand your market. That means going to trade blocs post-haste. Of the blocs that we could join quickly, the RCEP makes the most economic and strategic sense.

Next, we need to lower the barrier to entry into the the Indian economy, like China did in the 1980s. We have to drop the asking price of the non-tradable part of our economy by devaluing the Rupee.

Why does an FDI investor come in to invest in your country? She comes in to access the lower costs of your non-traded economy (the tradable part can be accessed, naturally, through trade). But this has a price set by the exchange rate. If that price is too high, you will not get the required FDI.

For the best results, we should combine this with a strategy of concentration of investments at select export promotion regions in order to offer lower costs to firms in the long run.

Also read: US Intends to have ‘frank conversations’ with China on Trade Ties: USTR Katherine Tai

Next, join the RCEP. The beauty of preparing to join the RCEP is that it automatically repairs your trade dispute with the US and paves the way to craft an FTA with the EU.

As competition becomes global, you need global scale and global access to markets. No significant FDI is going to come your way simply to serve local markets. Nor do you want that sort of FDI because you want exports. Therefore, when you have to sell your wares, lower the price; there is no shame in doing so.

Recognising the need for export-led growth is very welcome; Modi can combine it with some of the reforms already in place to give FDI a humongous push.

To bag the FDI required to make the doubling of exports possible, a currency realignment to access the FTAs is imperative. There is no way we will get any significant FDI that leaves an export dependent firm out of the RCEP. Single country markets, even as large as India’s, no longer enthuse global firms.

You are either in the RCEP or you are out, as a global outcast.