Compared to other large economies around the globe, India does not have the credit institutions in place to support the real economy on the scale its growth needs demand. 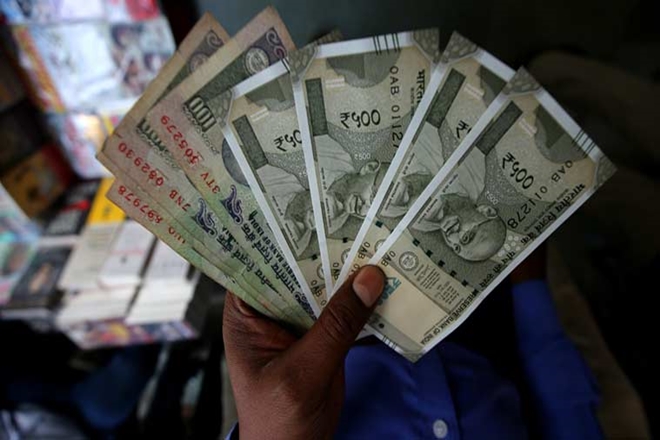 India’s GDP growth rate hit a high just before the 2008 global financial crisis. Since then, while it has generally kept pace with the global growth rate, its out-performance relative to global growth has started tapering off.

In particular, growth has further shrunk over the last five years, after after several serial disasters by the Narendra Modi government. These include the disruption caused by demonetisation in 2016 and a badly planned GST roll out barely six months after the note ban shock. The GST tax gutted tiny firms, forcing them into closure. It hugely disrupted the informal sector and destroyed many jobs. Then came the IBC Act, also in 2016, that forced banks to recognise non-performing assets in their books that had been in the system since the global financial crisis, and had not been attended to even after 2014, even though their extent was widely known. 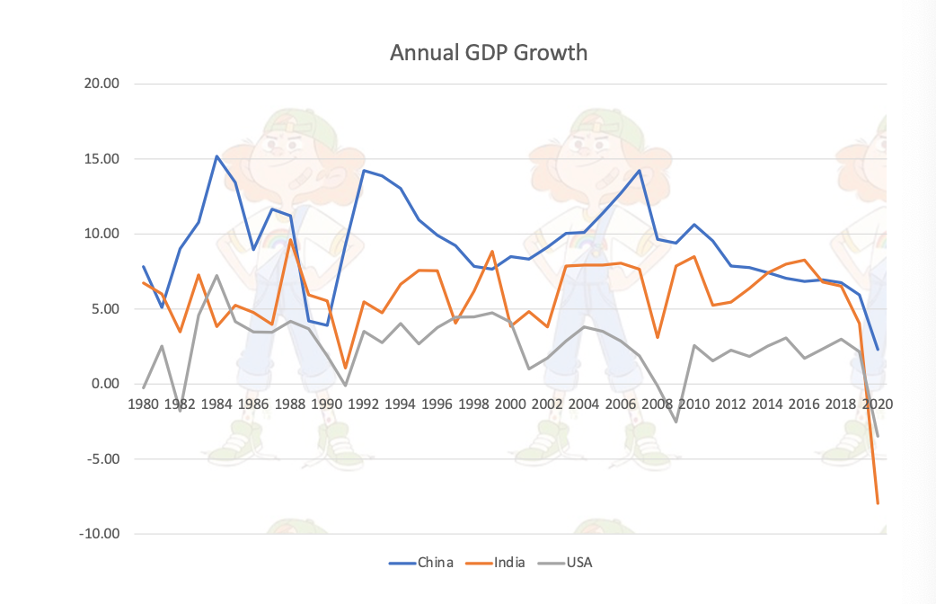 As the chart above shows, the Indian economy was slowing even before the pandemic. The COVID-19 shutdown cratered the GDP by 28% in the first quarter of 2020-21, taking it to 7.3% for the whole year.

The question therefore is first about what ails the economy, and what can be done to accelerate growth back to the 8% to 10% plus orbit.

Our gross savings rate as a percentage has been declining for years. One reason for this of course in the structural increase in unemployed as a proportion of the total workforce, a figure we take enormous care to ignore. But the correlation between the two is unmistakable, as the following graph shows. 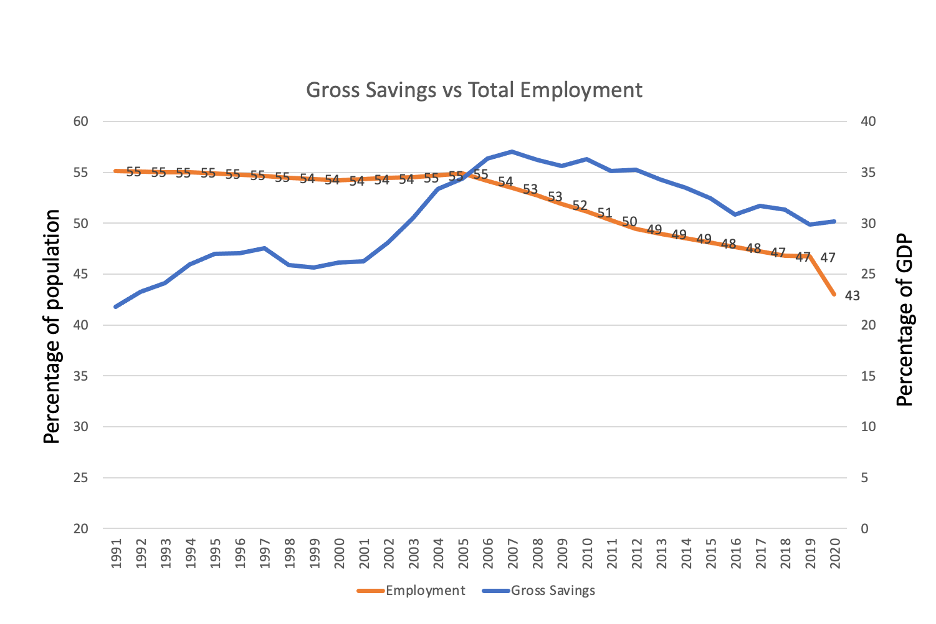 What is obvious from the data above, is that gross savings were growing from 1990-91 onwards as employment was stable, and the economy experienced above normal real growth following reforms in 1990-91.

However, with RBI’s disastrous reset of exchange rates in 2004-05, employment in India started dropping, as exports as percentage of GDP started to decline, and with that, the growth in Gross Savings Rate [GDS] not only topped off, but also started falling in line with the falling employment rate.

The link between the two need not surprise us. As employment goes down, expenses on upkeep of people remain the same while, number of employed falls. The increasing burden of expenses on the employed, reduces their savings.

GDS is the key determinant of the other crucial factor for growth, the Gross Fixed Capital formation, [or GFCF] and we examine the relationship between the two in the following graph. 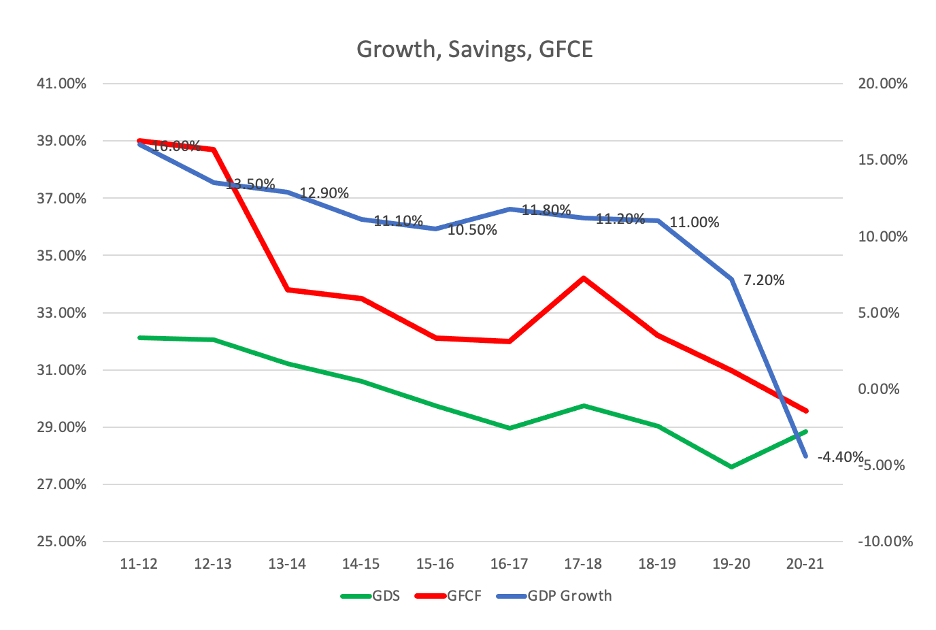 GFCF is the key determinant of future growth in any economy, and the Indian case is no different.  Every 5 units of GFCF produces an incremental growth of 1 unit of GDP, India’s ICOR being 5.  The ratio is unusually volatile but in the period under review it produces a remarkably consistent set of results as shown in the following graph. 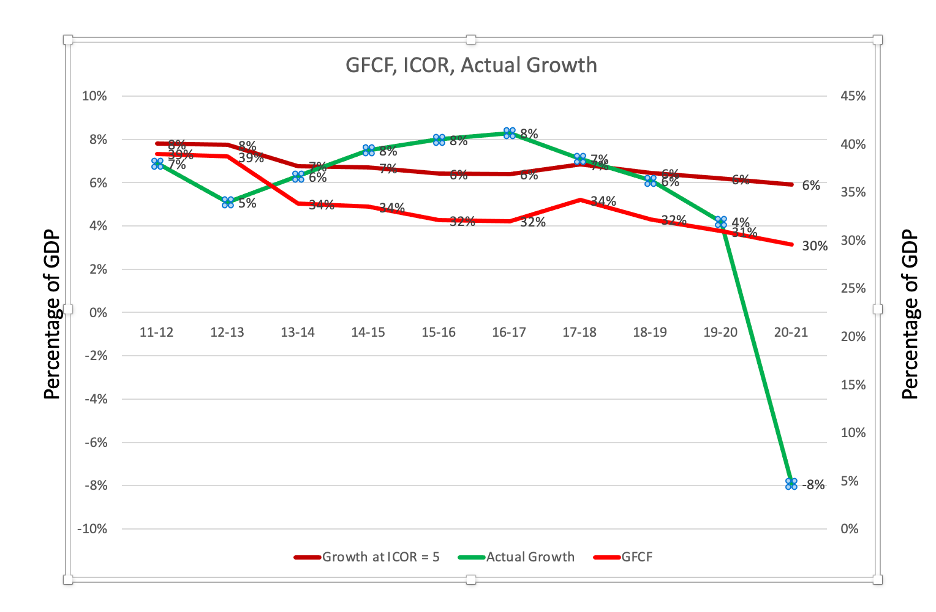 The off -the-charts reading in growth in 2020-21 is basically used by Modi’s abrupt shutdown of the economy for avoidable theatre.

The larger point from the charts is that firstly, India ICOR at 5 is rather large [a data point that vitiates RBI’s relative productivity gain thesis where such a ratio should contract going forward] and secondly there is little scope for higher than GFCF induced growth rate going forward.

Therefore, the key to future growth rates is:

[a] a higher employment rate that puts more people to work reducing the transfer burden on those employed, boosting their savings.  This may require reliance on export led growth, that requires a higher FDI fed growth, which has its own implications for India’s flawed exchange rate policies.

[b] a higher savings rate either through more employment and/or higher FDI that the existing 0.50% of GDP.  In fact, FDI would have to increase to as much as 10% of GDP if we are to have any chance of doubling exports from $450 to $1 trillion in 10 years.

[c] GFCF has not picked up despite substantial tax cuts in FY19, amounting to 1.45 trillion INR, which was nearly 0.5% of GDP.  We have to ask why this is so.  If higher profits and savings in the private sector itself cannot induce higher investment, then something is seriously wrong with business confidence.

Government statistics published in budget papers, such as the economic survey, have been increasingly disguising the total share of domestic savings that the government draws downs from the savings pool, preempting private sector borrowers. So I have recast the data somewhat to show the real draft on GDS by the government over the last decade.

I begin with Private Final Consumption Expenditure [PFCE] and Government Final Consumption Expenditure [GFCE] to arrive at the gross savings for the year. From this we take out government borrowings and non-tax revenues which are largely dividends from PSUs including RBI, and disinvestment proceeded etc. that come from the same savings kitty that we call GDS. The two preempt the GDS, and what is left over is available to the private sector, which is shown in column 7 of the table.

So that is the humongous shortfall in savings that the private sector faces. For every rupee it invests in GFCF, only 50% of the amount necessary is available in the savings kitty. So the question, is where does the rest come from?

The balance must come from incremental credit creation within in the domestic economy, either via banks, or other agents like NBFCs, or it must come from abroad. But considering the huge requirement, the shortfall must be made up by banks in any given economy. Let us see what India does.

Bank lending, as percentage of GDP, has ranged from 51.9% in 2011-12 to 56% in 2020-21. This the absolute level of bank lending, not incremental over the previous year. If we take 51.9% as the starting point of our analysis, then the last row of the table shows what would be the bank lending as percentage of GDP, if the entire shortfall in savings available to the private sector came from incremental bank finance.

The graph below puts all this data in perspective. 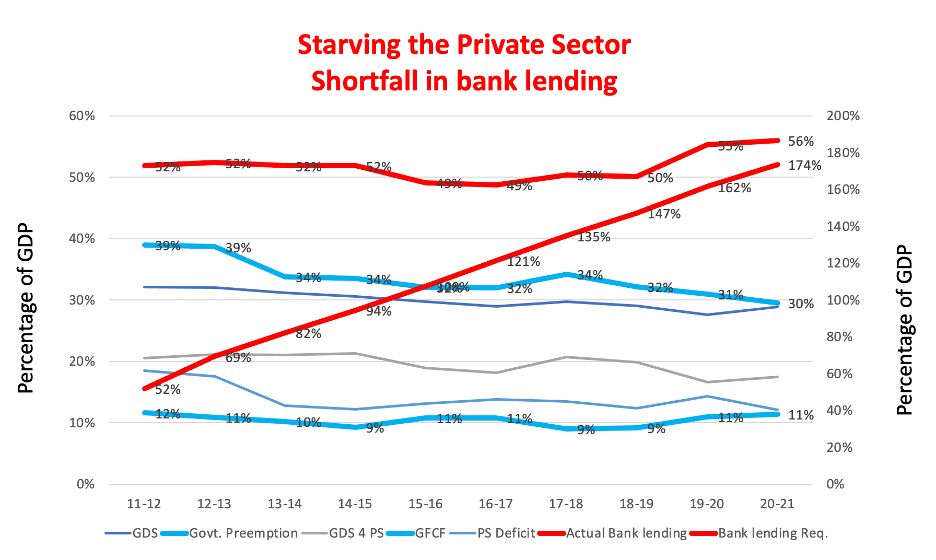 The two red lines put the whole problem in a nutshell.  The flat line shows actual bank lending as per Y axis on the left, while the steep upward sloping red one running to the right Y-axis shows the total bank lending required to support private sector GFCF as percentage of GDP.  The humongous gap between the two, shows how the private sector is denied credit in the domestic economy to fund its new investments. 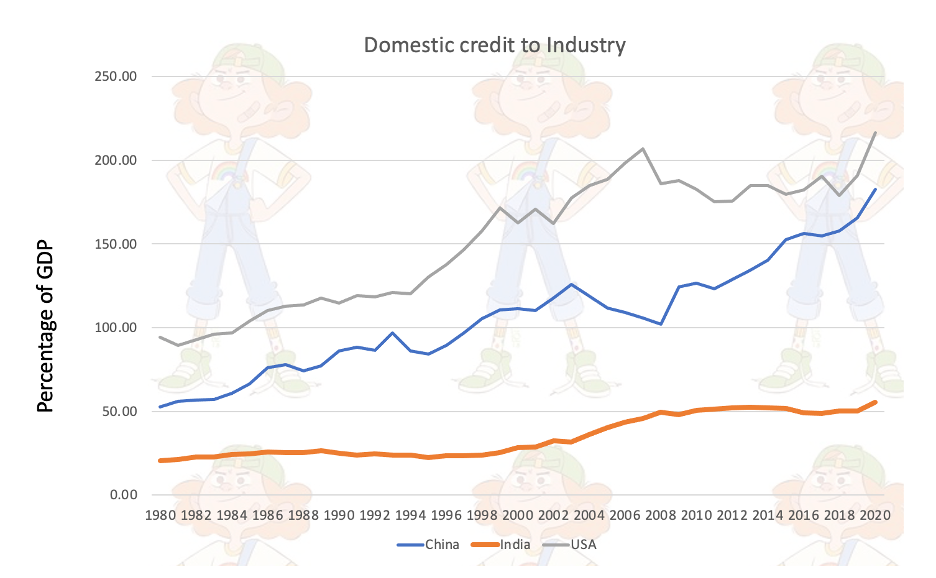 India has lagged behind both the economies in credit growth. Domestic credit real economy was about 25% of GDP in the 80s.  It the ratio doubled from 25% to 50% after the economic reforms of 90/91, supporting the rapid growth in the economy. But since 2006, the ratio has stagnated at 50% of the GDP, and over time has dragged down both GFCF and GDP growth.

A look at the chart showing percentage of NPAs of to gross loans from the banking sector explains the choking of credit to the real economy 2014, when the NPAs shot up from 4.35% of the loans outstanding to 10% in 2017. They have come down since but are still high at 8% of loans outstanding, making expansion of their balance sheets very difficult.

My point here is not to go into the woes of the banking system or explore the sharp rise in NPAs in India. I am simply making the point that compared to other large economies around the globe, India does not have the credit institutions in place to support the real economy on the scale its growth needs demand. We need a GFCF of 50% of GDP to grow at 10% pa, but the credit delivered to the real economy for this level of investment is zilch: zero from 2011-12 to 2019-20.  How in the world can our firms invest at the scale necessary, if we won’t provide the required credit? 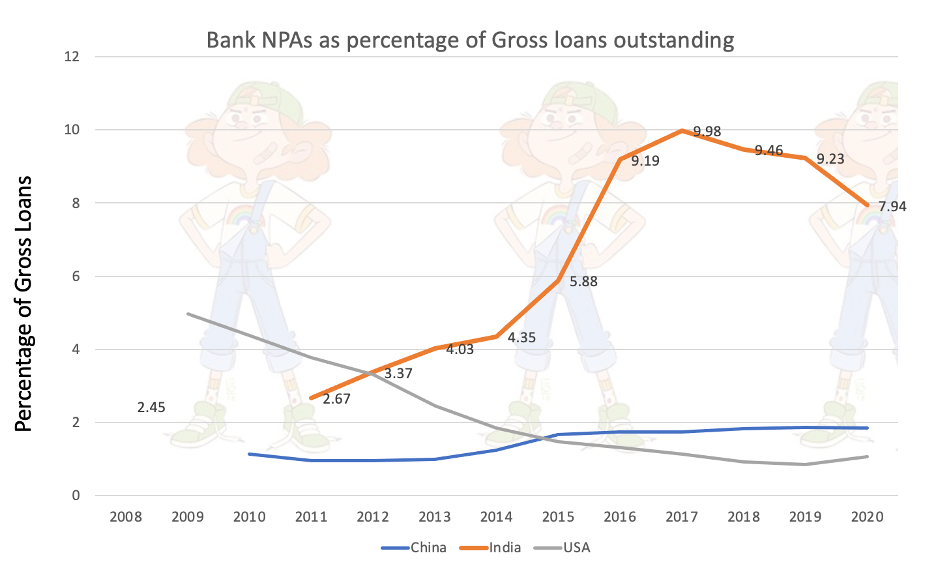 Part of the problem is also not lack of institutional capacity itself but also attitudinal. We bring a needlessly puritanical attitude to bank lending that is incompatible with a growing economy and growing firms. No growing firm, with an expanding balance sheet repays loans as it is hungry for capital. What happens is that percentage of loans supporting the firm’s activity shrinks over time as loans are replaced by equity. The proclivity to treat bank loans as some scam; to read fraud into business failure, has been encouraged by the ruling party, but in turn, it has harmed the economy by shutting off credit.

Secondly, we need a deep corporate bond market and this needs to be put into place on an emergency basis with Govt. support. I shall look at this in another essay.

Meanwhile, how can India grow faster than the Modi rate of 4% pa? Simple, fix the banking system, not the way he has – by freezing credit, but looking into where the credit is choked, why its is choked, and how the flow can be restored. A development bank funded by the insurance sector with government credit enhancement could be one immediate solution for creating a liquid market in corporate debt.

Sonali Ranade is a political commentator based in the US. She tweets at @sonaliranade.