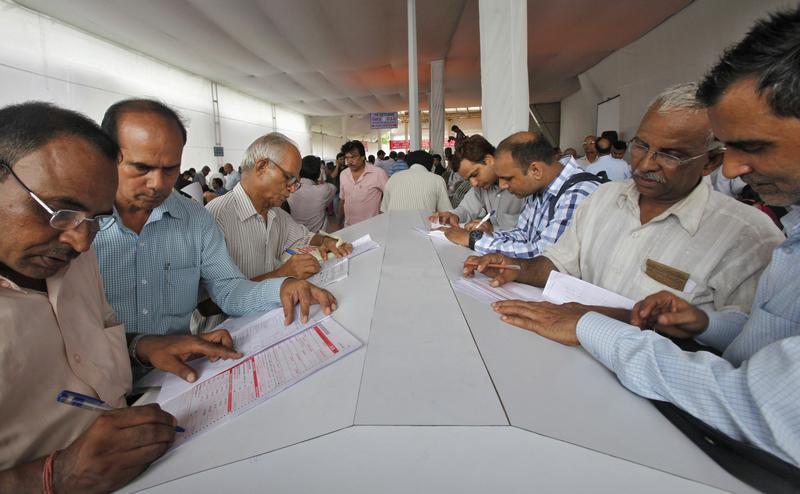 In India, the maximum marginal rate on personal income tax (statutory rate plus surcharge and cesses) has been steadily declining over the period 1970-2015. Credit: Reuters/Anindito Mukherjee

The fact is, as we look around us, income inequalities have been growing. Whether it is the contrasting images of the Trump Tower juxtaposed against the poor, homeless man begging outside the Columbus Circle subway station in New York, or the Ambani mansion towering over slums and run-down buildings in Mumbai. While in 2000, India had not even one dollar billionaire, in 2017 we have of 111 of them, according to the Hurun Global Rich List.

The World Wealth Report, 2014 says that the number of high net-worth individuals (HNIs) – defined as those with investable wealth over $1 million – in India was 156,000 in 2013. India now has the third highest number of dollar billionaires in the world, behind only the US and China. Of course, in sharp contrast, India also has the highest number of people living in abject poverty in the world – a staggering 276 million people lived on less than $1.25 per day at purchasing power parity (PPP) terms according to the World Bank in 2011. According to a revised methodology introduced in 2014, 179.6 million people lived in abject poverty, below the new benchmark of $1.90 per day in India. But, taking another, more stringent measure, as of 2014, 58% of the total population were living on less than $3.10 per day. That is more than 600 million people.

Gini coefficients are high and have been rising in India from the 1980s to 2010s, as the estimates by Frederick Solt show. These estimates are contained in the SWIID Database.  They show that in India’s case, the Market Gini, i.e., the Gini coefficient calculated prior to any adjustment for taxation and transfers went up from 0.43 in the 1980s to 0.49 in 2010.  More significantly, the net income Gini, which is worked out after allowing for a reduction in the disposable income consequent to taxation, and any increase on account of income transfers, was almost the same: about 0.425 in 1980s and 0.48 in 2010.

It is puzzling that India’s political parties, which swear by the motto of poverty alleviation, have yet to properly implement any system of progressive personal income taxation. Credit: Reuters

The trend is unmistakably one of an increase in inequality as measured by the Gini coefficient. This means incomes of the rich are rising at a faster rate than that of the poor, which gels with the conclusion Piketty and Chancel have arrived at. Second, looking at Solt’s estimation of net Gini, we can see that there is a very marginal impact of taxation policies in India on income inequality. Net Income Gini coefficients are only very slightly lower than market Gini coefficients. The majority of taxes in India are indirect which are more regressive than progressive, and the maximum marginal rates of income tax even on very high incomes are relatively low.

This is in sharp contrast to developed countries where the net income Ginis are much lower owing to progressive tax and fiscal policies. The International Monetary Fund (IMF) estimates that in 2005, in advanced economies, the net Gini coefficient was a full 14 percentage points lower than the market Gini. About two-thirds of the impact came from expenditure tools, and tax policy contributed to as much as a third of the reduction in inequality.

Not only is inequality seen as harmful to social equity, new research shows it is detrimental to economic growth as well. Indeed, the IMF has found growing evidence that high income inequality can be detrimental to achieving macroeconomic stability and growth. It has found that a higher net Gini coefficient is associated with lower output growth over the medium term. In fact, they found that there is an inverse relationship between the income share accruing to the rich (top 20%) and economic growth. Their econometric analysis revealed that if the income share of the top 20% increases by 1 percentage point, GDP growth is actually 0.08 percentage point lower in the following five years. Instead, a similar increase in the income share of the bottom 20% (the poor) is associated with 0.38 percentage point higher growth. They also find that this positive relationship between disposable income shares and higher growth is also valid for the middle class. So, a redistribution in favor of the very poor and the middle class is in general pro-growth.  The conclusions of the IMF are in line with what the Organisation for Economic Co-operation and Development (OECD) has found for their members, the rich countries.

The above discussion points to several implications for tax policy. First, it is clear that there is a need for increasing the overall progressivity of the Indian tax system. This will have to be done by increasing the share of the existing direct taxes in total taxes, such as the personal income tax and corporate income tax, but also by looking to exploit other direct tax handles more effectively, like property taxes and wealth taxes. One of the most obvious things to do is to implement progressive personal income taxation. An IMF report finds that revenue-maximising tax rates for individuals may lie between 50-60%, but optimal rates are likely to be lower.

In India, the maximum marginal rate on personal income tax (statutory rate plus surcharge and cesses) has been steadily declining over the period 1970-2015. The impact is sharper if combined with the expansion of brackets which has also taken place over the years, both at the lower and higher ends. In general, the tax on high incomes has come down sharply.

On the other hand, the number of individual taxpayers has remained sticky in India, in sharp contrast to a comparator country China. Thomas Piketty and Nancy Qian, in an interesting analysis, compare the growth of personal income taxation over the period from the mid-1980s to 2015 (they project data from 2004 onwards, based on past trends.) It is fascinating to see that while China has actually seen a marked rise in the percentage of its population now paying income taxes, this number has remained sticky in India.  The income tax has become a mass tax in China, but remains an elite tax in India.

Compared with the OECD and the US, India’s personal income tax collection as a percent of total revenues and of GDP is far lower, as the chart shows.

Even in comparison to our peer nations, in the BRICS group for example, India collects less personal income tax than China (5% of the GDP) and Russia (3.6% of the GDP) but more than Brazil (less than 1%. South Korea (3.7%) and South Africa (8.5%) collect significantly more personal income tax than India, according to data of the International Centre for Tax and Development database, 2016.

Politically, it would appear that for parties that swear by the motto of poverty alleviation (and almost all political parties in India fall in this category), one of the most obvious things to do would be to implement progressive personal income taxation. The very rich have huge disposable incomes left after taxation, and hence can bear the burden of further taxation, without it having deleterious welfare effects. The fact this has not happened, and in fact, over the years the maximum rates have been coming down, is perhaps indicative of the heft of the very rich.

The questions that arise are, what should be the top rate, and on what incomes should it be levied?  If we do succeed in levying a higher top rate, what is going to be the impact on tax revenues?

Let us look at what are the top tax rates and at what level of income they apply, in some of our peers and leading countries. “Applicability” is defined as the number of times of per capita income at which the top rate applies. 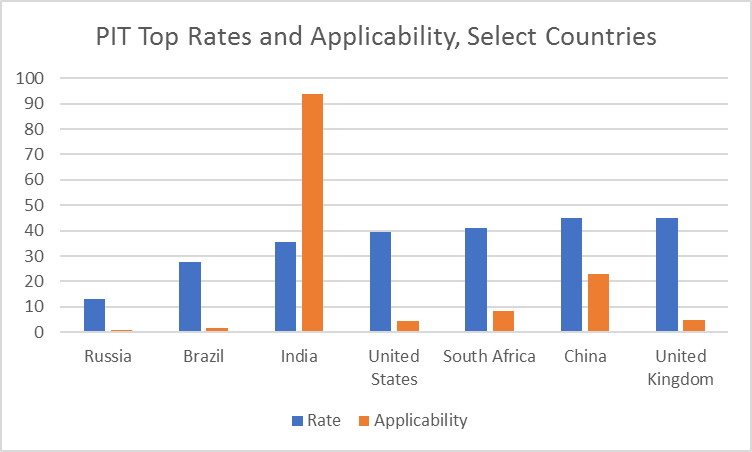 So, India has a moderate top rate of income tax but the top rate is levied on relatively very high incomes which are almost a hundred times per capita income. I believe the top income tax rate in India should be increased to bring it in line with other peers of ours like China and South Africa and to have an impact on income inequalities. In my opinion, the appropriate top marginal rate should be 45%.

Apart from the maximum marginal rates, other factors are also important in helping build a more progressive structure. One is to review the various tax deductions and incentives available to taxpayers. Certain tax deductions may be more beneficial to the rich, for example, mortgage interest deductions; the rich are more likely to be property owners and are likely to be in higher tax brackets so their tax deductions are worth more. Another is to consider the tax exemption threshold. A threshold in general promotes progressivity as it exempts from tax low incomes of the relatively poor. In some developing countries, the thresholds are fixed as some multiple of the per capita income. In India, the basic exemption threshold is set at Rs 2,50,000, which is about 2.7 times the per capita income of Rs 93,231 for 2015-16 (Economic Survey of India, 2015-16). With the various tax exemptions available, for most individuals with incomes up to Rs 450,000, the amount of tax payable is zero. This is almost five times the per capita income, and it should be reviewed.

The amount of tax revenue foregone due to the various deductions provided to individual taxpayers totals to a significant Rs 35,293.6 crore in 2014-15, as per the Statement of Revenue Foregone 2015-16 put out by the Ministry of Finance. The total amount collected under the head ‘Taxes on Income in 2014-15’ is Rs 2,65,733 crore. So, the revenue foregone is a hefty 13.3%.

Given the sharp inequality of incomes in India, and the crucial need for increasing the tax take for spending on poverty alleviation programs and other social expenditures, and infrastructure development, there is a case for some of the deductions from the point of view of rationalising the overall deduction and allowance structure of the personal income tax regime. That is the only way that the amount of revenue foregone could be reduced and the tax revenue from the personal income tax can be increased as desired.