Will India’s Rainfall-Inflation Dynamics Be an Interesting Googly for RBI’s MPC?

A farmer carries saplings to plant in a rice field on the outskirts of Ahmedabad, July 5, 2019. Photo: Reuters/Amit Dave/File Photo

The rain gods have been kind to India’s farmers, showering normal and well-distributed rainfall during the supposed “monsoon period” of June to September.

However, the erratic rainfall continuing until almost the first week of November has been an aberration and led to significant damage to kharif crops. The market arrivals of seven out 11 key kharif crops have recorded a decline in arrivals by more than 30% (year-on-year).

Keeping the shortages in the backdrop, there could plausibly be an after-effect on retail and wholesale inflation. On the other hand, the leading indicators continue to be lacklustre, led by core sector numbers which have contracted to their nadir since the commencement of the new index.

Since August 2018, retail inflation has been one of the few bright macroeconomic variables amidst a host of debilitated indicators. The chief reason for this has been deflationary pressures or low inflation in the food basket, which has the highest weightage (45.9%) in retail inflation.

The deflation in food components, especially vegetables and pulses, can be validated by the table below (highlighted in green). 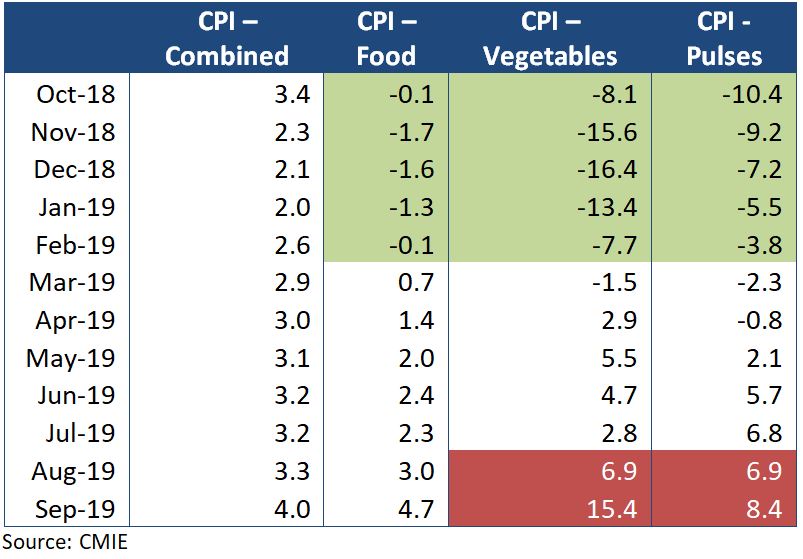 Also, data sourced from Department of Consumer Affairs on retail prices of essential commodities shows that the trend of rising prices has continued with significant rise in prices of dal (moong, urad and tur) along with vegetable prices namely onion and tomato.

Though this is evidenced in the chart below, you, as a consumer must have also felt the pinch in the grocery market. 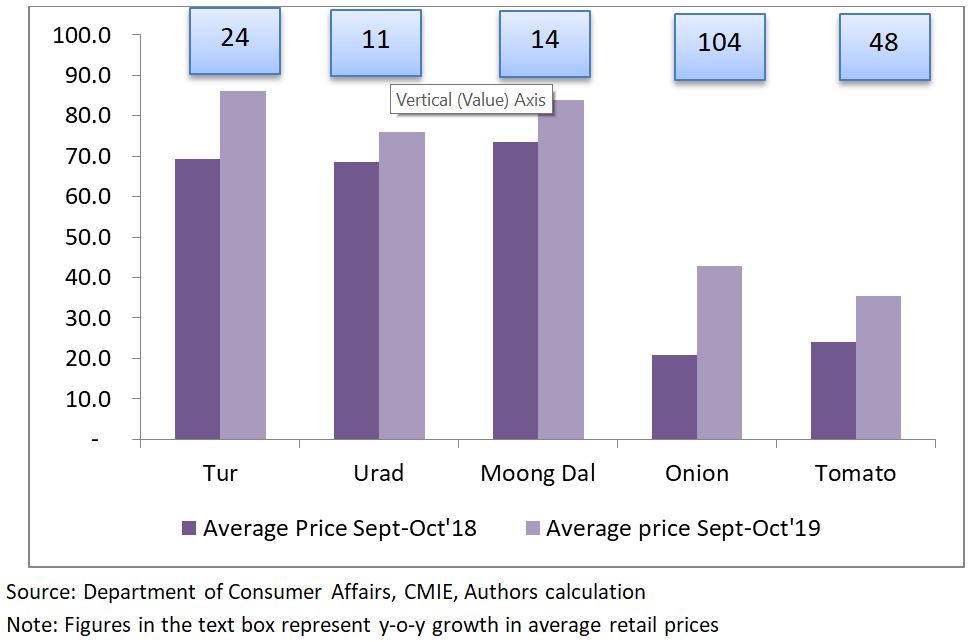 The cumulative percentage deviation in actual rainfall from normal years during this monsoon season (June-September) has been almost 10%, which as per the IMD depicts normal rainfall. The erratic rainfall in October affected the harvesting of kharif crops, which in turn will have a bearing on retail food inflation.

The table below shows the metrological sub-divisions and the deviation in rainfall from normal. It is important to note that, as per IMD, all these regions fall under the definition of “excess rainfall”. These five states – Karnataka, Maharashtra, Rajasthan, Gujarat and Madhya Pradesh – saw a significant pick-up in food inflation and general retail inflation in September. The excess rainfall in October will continue to push prices higher in these states.

Seven out of the eight core sector industries are flashing red with y-o-y growth in coal production touching a low of (-)21%. PMI-manufacturing, though showing expansion, has declined to a 2-year low. Incremental credit growth (April 1-October 11, 2019) continues to be flat at 0.2%.

The MPC has projected inflation to remain below target (not even exceeding 4%) until Q1-FY2021. It had continued to emphasise the need to restore growth momentum by reinvigorating domestic demand. In addition, the accommodative stance was harped upon as long as it is necessary to revive growth.

However, this diverging rainfall-inflation dynamics and continuing growth concerns would be a tough nut for the MPC members to crack. The GDP number for Q2 and core sector for October (to be released at the end of this month) would be the key information for the MPC to decide on its stance.