While a mix of fiscal and monetary stimulus is the need of the hour, larger structural challenges also need to be addressed in the new regime.

Gross domestic product (GDP) numbers for the fourth quarter of FY’19 have been released and as anticipated the quarterly growth of the Indian economy has slowed to its lowest since June 2014.

After the resounding victory in the recently concluded elections, the incumbent government has its task cut out as it will be taking over an economy which is not in the best shape. The successful triumph of the government was on the back of gains from tangible and micro factors rather than gains from the overall assessment of the performance of the domestic economy.

High-frequency indicators and India Inc’s corporate performance for the last quarter of the fiscal had already indicated a quasi-slowdown and all analysts did chalk out their projection on similar lines. The recent release from the Central Statistics Office (CSO) corroborates the inevitable slowdown but the panic buttons need not be pressed as yet.

With a clear mandate for the government and cordial relationship between the Finance Ministry and the central bank, a mix of both monetary and fiscal policy could propel economic growth higher in the short to medium term. However, the long-term objective certainly calls for structural changes in the economy, especially in the agriculture and manufacturing sectors.

Financial news journalist Puja Mehra, in her recently released book The Lost Decade, makes a very pertinent point about the economy during the previous five years. She points out that the Indian economy has garnered the tag of the fastest growing economy but without a world-beating sector.

So are the current quarter numbers reflective of all components misfiring? The answer to this is a resounding ‘yes’.

The economy this fiscal (FY’19) had been largely driven by higher government spending and similar robust growth was recorded in the quarter that ended in March ’19.

Barring this, all other components show either a moderation or subdued growth. With the elections around the corner and government working towards adherence of the fiscal deficit target, public spending would have been higher otherwise.  On the other hand, India’s mainstay which is consumption (accounting for almost 60% of the economy) witnessed a quarterly growth of merely 2.4%, reflective of a slowdown in consumer demand.

India continues to be driven by the services sector with both agriculture and industry hardly lending any support. Despite the liquidity crunch in the financial sector, the financial services witnessed healthy growth. However, the pressure points continue to be agriculture, growth of which has contracted to almost a years’ low and subdued growth in the manufacturing sector.

Are investments catching up?

Amidst the slowdown in the various components, the gross fixed capital formation (as a percentage of GDP-current prices), which measures the overall investment climate in the economy, has also seen a slowdown.

The growth in GFCF, which had been robust and recorded double-digit growth since December ’17, recorded a subdued (yoy) growth of 3.6% in Mar’19. The election uncertainty and larger funding routed towards the NBFC/services sector have crowded out the investments from the industrial sector.

Though, juxtaposing the capacity utilisation rate based on the RBI survey with the growth in GFCF (as shown in the adjoining chart) in recent quarters shows a positive signal for higher investments. The only concern which remains going forward is meeting the funding requirement both via higher bank credit off-take and corporate bonds, especially to the industrial sector. 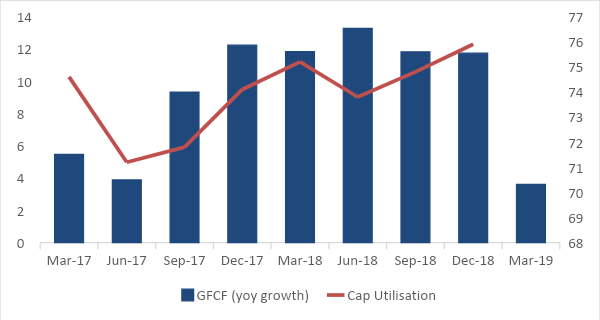 How do we stand on the podium relative to other countries?

The following table provides a snapshot of few advanced economies and developing economies and examines whether India too is part of a global slowdown.

Barring the US and UK economies,  all others in the table have recorded a slowdown in the first quarter of the calendar year 2019 as against the corresponding quarter a year ago.

Despite being entangled in complex Brexit negotiations, the UK economy has seen a sustained improvement during the previous 5 quarters. On similar lines, the US economy, which was feared to be undergoing recessionary concerns (following the inverted yield curve headline) has seen an uptick in the economy. However, all other economies do not paint a similar picture and highlight a slowdown which major multilateral institutions like IMF and World Bank are highlighting.

Does the economy need a mix of fiscal and monetary injection?

The so-called “lakshman rekha” of the fiscal (fiscal deficit target) and monetary (inflation target) framework is fixed and breaching both leads to indiscipline from both the government and the central bank.

Though the low inflation in the economy calls for a rate cut, a fiscal stimulus to revive the consumption engine remains restrained. Therefore, a mix of both fiscal and monetary stimulus is the need of the hour to address the recent cyclical slowdown in the economy in the short to medium term.

Also read: Modi 2.0 Must Get Cracking on Jump-Starting India’s Economy

But much broader structural challenges (namely GST rationalisation, higher prices for farmers amidst higher production, financial sector revival, job creation especially in the labour-intensive manufacturing sector and in turn propelling the sector) needs to be addressed to get back the tag of the fastest growing economy in the longer-term.

The focus of the new government in this regime would lie in making at least one of the components of growth (consumption, investment or exports) drive the economy in such a way that the higher government spending which has been the recent “Baahubali” of the economy takes a breather.

If this does not happen, the next time, voters may not miss out on looking at the broader performance of the economy.

Sushant Hede is an Associate Economist at CARE Ratings. The views expressed in this article are personal and do not reflect the views of the organisation.