Phasing out India's Lockdown Is Essential, but With More Nuance Than What's Been Done So Far

A market economy is not an automobile that can stop and restart at the touch of a button.

Labourers work inside a wholesale grain market during a nationwide lockdown to slow the spreading of coronavirus disease (COVID-19) in Chandigarh, India, April 20, 2020. Photo: Reuters/Ajay Verma

When Prime Minister Narendra Modi announced a total lockdown of the country to fight COVID-19, he did it perhaps with one idea in his mind. The spread of the virus had to be stopped first, no matter what it cost the economy. A trade-off between saving lives and saving incomes was unavoidable and lives had to come first.

What he, therefore, imposed on India was, according to an Oxford study of 73 countries, one of the most stringent lockdowns in the world.

Was Modi wrong in doing so? A month into the lockdown, that trade-off has not yielded the quick results that he may have hoped for. There can be no doubt that it has slowed down the spread of the virus. But it has not stopped it. The number of new cases registered every day is still rising, and a turndown is not yet in sight.

On the other hand, the lockdown has virtually dismantled the economy. With shops and markets closed and transport, except for essentials, forbidden, demand and production have both crashed. Unemployment, which in India really means the absence of even casual work, has soared to 23.4% according to estimates put out by CMIE.

GDP is now expected to decline sharply this year, and this too could easily turn out to be an underestimate. So, will Modi extend the lockdown on May 3?

Several state governments, including Delhi, have preferred to wait till May 3, but those that have not are starting to get their first taste of the unprecedented crash in demand that the lockdown has brought about. The first to feel it have been the farmers. The vegetables they are bringing to the market are rotting for want of buyers.

At the opposite end of the scale, automobile plants, like the Maruti plant at Manesar in Haryana, are reluctant to restart production because their yards are still full of the unsold cars left there by the 30% to 40% fall in sales over the last year.

Also read: Four Measures That Can Help Farmers Deal With the Impact of COVID-19 Lockdown

In between these extremes fall the 2,71,000 working factories and 71 million trading and other non-agricultural enterprises that provide components, sub-assemblies, and materials and transport to the large enterprises at the apex of the production chain,  and final goods to the public. The lockdown has disrupted not only these supply chains but, by virtually forcing the employers to throw tens of millions out of work, it has also destroyed a large part of the demand for their products.

The lesson the government should have learnt is therefore obvious: A market economy is not an automobile that can stop and restart at the touch of a button. The more severe the lockdown, and the longer it lasts, the more complete is the disruption of the economy and the slower the recovery will be. By the same token, the more the economy is protected, the sooner it will bounce back when the lockdown ends.

The industrialised market economies understand this. That is why, despite facing a pandemic fifty times as severe as what India is facing, they have thrown their balance sheets out of the window and are committing sums not dreamed of even during the Great Depression of the 1930s, to keep both demand and production capability alive while they fight the virus.

At its March 27 ‘virtual’ meeting,  the G-20 announced that its members will “inject over $5 trillion into the global economy, “as part of targeted fiscal policy, economic measures, and guarantee schemes to counteract the social, economic and financial impacts of the pandemic”. Of this, the US is going to spend $2 trillion and the European Union another 1.85 trillion. Four countries, Germany, France, Spain and the United Kingdom have committed $1.5 trillion.  These are not spendthrift governments. The Trump administration, in particular, is neo-liberal to a fault and hates “the nanny State”. 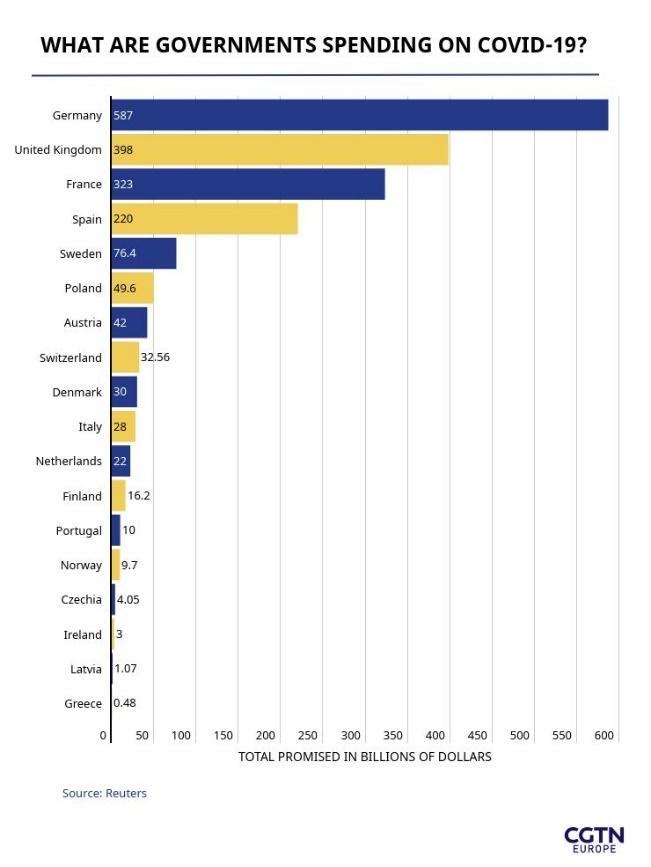 But Modi has made no such commitment. The only loosening of the purse strings so far has been by the RBI. On March 27 and April 17 the RBI eased lending to industry and trade by the banking system through five measures:

Taken together these are intended to infuse Rs 3,37,000 crore into the economy. It sounds like a great deal of money, but is only  1.8% of the GDP – half of what Bangladesh is putting into its economy as interest-free and very low-interest loans. But much of even this small sum is not likely to find its way to the construction sector and other small and medium enterprises that need it most.

This is because the relief is being offered in the form of loans, not grants. Even at the best of times, taking a loan involves taking a risk. And these are not the best of times for industry and trade. So, as the RBI is finding out, increasing the commercial banks’ capacity to lend repo-linked loans, even at 7.25%, a rate not known for a decade, is not generating much enthusiasm among prospective borrowers.

One indicator of the absence of demand for loans, and of the ingrained risk-averseness of the bank managers, is that by end-March commercial banks had parked Rs 3 lakh crore of deposits in reverse-repo accounts with the RBI.

Modi and his advisors need to admit, therefore, they need a completely different philosophy, and a radically different approach to the economy while fighting COVID-19. This requires giving grants not loans, creating entitlements not additional millstones for those who have been harmed by the lockdown.

This approach requires creating two safety nets: first employers need to be kept solvent while their businesses are shut. Second, the livelihoods of the 240 million workers in the non-agricultural sector have to be sustained even when they are producing nothing.

Keeping employers solvent requires giving them sufficient funds to meet their fixed costs. These are rent; debt servicing and the cost of maintaining their assets during the lockdown and for a short while thereafter. Twenty, even ten, years ago, this would have been extremely difficult. But in this age of digital record keeping the central and state governments have the means to identify all but a small fraction of these enterprises, and unorganised sector workers.

Central tax authorities have detailed knowledge of the finances and payrolls of the 2,71,000 working factories in the country. In addition, they have the detailed submissions of close to 10 million enterprises that have registered to pay the GST. A side benefit of using this data to identify beneficiaries is that it will provoke a massive increase in registration for the GST by others.

Identifying and reaching out to the workers, and above all keeping them in, or close to, their places of employment, is a more challenging task. But it too is not insurmountable. According to the Economic Survey 2017-18, about a third of the 240 million are regular employees of the central and state governments, the public sector and private enterprises in the organised sector. Few of these will need additional handouts. Another 50 to 55 million workers can be identified from their employers’ GST tax returns. Most of the remainder can be identified through their ration cards, Jan Dhan Yojana accounts and Aadhar cards. But several million workers, mainly migrants without ration cards, will still fall through the cracks. A labourer sleeps on sacks as traffic moves past him in a wholesale market in the old quarters of Delhi, India, January 7, 2020. Photo: Reuters/Anushree Fadnavis/File photo

One way of preventing this would be to make financial support for employers conditional upon their not laying off any workers,  and agreeing to be the conduit for the compensation that the government decided to give them. (In Britain, which has followed this route, the government has fixed the compensation at 80% of the workers’ salary). Had the Modi government done this on March 24, much of the damage to the economy and to human lives that we have seen in the past month could have been averted.  Such a scheme can still help the migrants who remain trapped in the cities, and give the courage to those who fled, to come back.

The compensation to employers and employees outlined above will need to be in the form of entitlements. That will require a vast increase in government spending. Is this something to worry about? Will it cause inflation? Those who believe this do not understand the very basics of economics.

The GDP of a country is the total volume of goods and services sold to the final consumers multiplied by the average price of each transaction. If the number of transactions drops sharply, the GDP of the country falls proportionately. If the fall is prolonged it will either force prices down, or drive producers out of the market till demand and supply come into balance once more. In such a situation pumping money into the economy will prevent deflation, a shrinkage of GDP and a fall in employment. That is not inflation but reflation.

The rest of the world understands this and is therefore not hesitating to print as much money as it needs to meet its commitments. Malaysia, another newly industrialised (but much better governed) country like us,  has committed 14% of its GDP to saving the economy. So where does the government’s obsession with the fiscal deficit spring from?

The answer is from the fear that a large jump in public expenditure now will make international rating agencies anticipate a spurt in inflation in the future, and downgrade India’s credit rating. This could trigger a flight of foreign short term capital from the country and bring the rupee-dollar exchange rate crashing down.

Were that to happen it would seriously imperil the future of a large section of the private sector  which has been borrowing heavily abroad since 2007 and has piled up $440 billon dollars of private external debt, of which a large part is not hedged against a devaluation of the rupee. But that is not the whole story. $238 billion of this debt is maturing by the end of 2020. That is 52% of India’s  foreign exchange reserves today!

The RBI therefore believes that India cannot afford to buck the credit rating agencies because in relation to its annual  debt servicing  obligations its foreign exchange reserves are woefully small. A sudden outflow of foreign capital now, on top of the debt repayment, will leave so little in  India’s reserves  that it will immediately become the target of international hedge funds, as Thailand, Indonesia, and the Philippines became during the Asian Financial crash of 1997. That is the fear that, one suspects, has been driving the RBI to maintaining   high interest rates through thick and thin for the past eight years, pretending that it is doing so in order to fight inflation.

Its fear is understandable. But is avoiding deficit financing, and trying to save the present by shifting the burden onto the future the answer? Had it been, India would not have experienced an outflow of $15 billion in March, the largest single monthly outflow in its history, and a nearly 7% fall in the value of the rupee in the past three months, most of it in the past 30 days.