There is a decent chance that the GDP numbers, which say very little about the state of the unorganised sector, will be revised downwards. 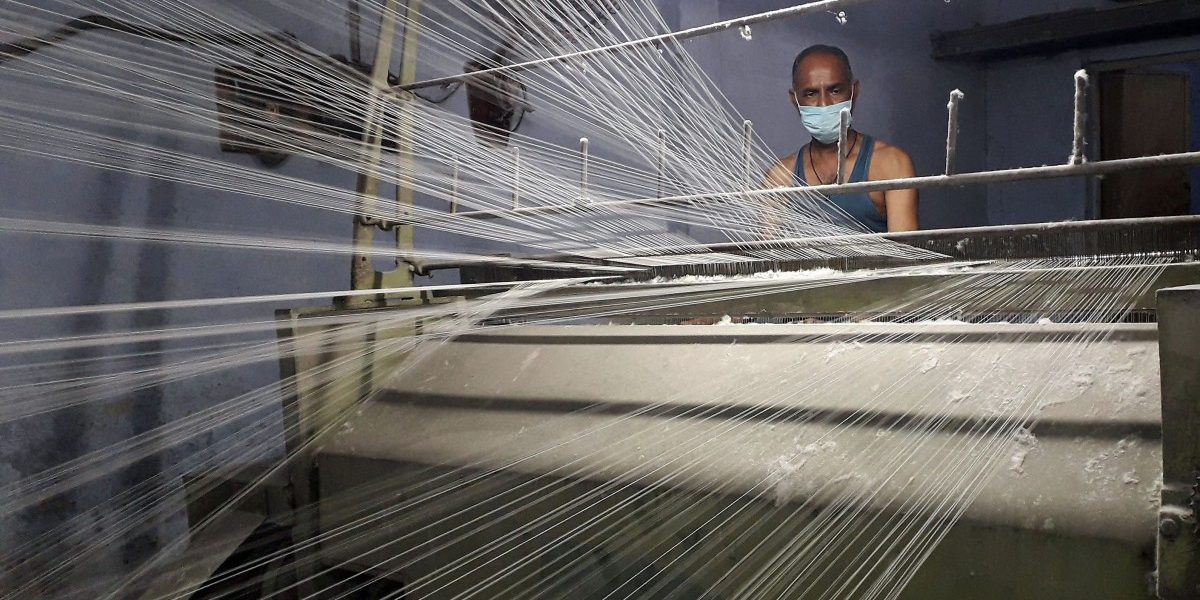 A worker wearing a protective face mask works on a loom in a textile factory, amidst the coronavirus disease (COVID-19) outbreak, in Meerut, July 7, 2020. Photo: Reuters/Manoj Kumar/File Photo

It is surprising that the gross domestic product (GDP) numbers for the first quarter of FY’21 show a decline of only 23.9% over the same quarter last fiscal.

It should have been much worse. What does this number not reveal?

The economy badly tanked in April, when there was a complete lockdown. Even the agriculture sector, which works out in the open and could have continued normally, was adversely impacted due to collapse in demand and freezing of trade and transportation. Arrivals in North Indian mandis had fallen to half of what they were in April 2019. Floriculture, horticulture, vegetables, poultry and milk are some of the commodities which suffered. Though the rabi crop was a record, agriculture production as a whole would have risen little in April-May.

Production of essentials was permitted during the lockdown, but fast-moving consumer goods (FMCG) firms faced a decline. Most people could not go to work, so roads were empty and offices and factories were shut. Government offices were also closed and only the essential administration and police were functional. All in all, the economy would have been working at less than 25% of its level in April 2019.

As the lockdown was eased in stages from May, activity started to recover. But it still could not have been more than 40% of the level in May 2019. In June with Unlock 1, more activity was allowed but by all accounts many services were not allowed and this sector constitutes 55% of the GDP. So, the economy could not have been working at more than 60%.

In brief, during the period of April to June, the economy was down about 57% compared to the level in 2019. Even if one assumes very optimistically that the economy was functioning at 40%, 50% and 70% of the last year’s levels in April, May and June 2020, the decline in GDP for this period would be 47% and not 23.9%. Why is the official data not reflecting this decline in the GDP?

The unorganised sector is 94% of employment and 45% of output of the economy. Agriculture is its biggest component and its data is available but for the rest, the data is unavailable. It is collected once in five years and in between it is assumed that the organised sector can be used to proxy the unorganised sector also. This is not true after a shock like demonetisation or the lockdown.

Watch | Salman Soz: Effects of Q1 GDP Contraction Will Be Felt For Years to Come

The official document giving the data for Q1, titled ‘Estimates Of Gross Domestic Product For The First Quarter, (April-June) Of 2020-21’ says, “There has been an impact on the economic activities as well as on the data collection mechanisms. …the usual data sources were substituted by alternatives like GST…”.

This lets the cat out of the bag. Data was hardly collected for April and May due to the lockdown. The data for Index of Industrial Production and Consumer Price Index could not be obtained. Companies were given time till September to file their quarterly reports. GST payment due in March was allowed to be postponed to June. Consequently, only the companies doing well or not too badly announced their results. Use of this data will then give an upward bias to the growth rate. Similarly, use of June data for GST will give an upward bias to the growth rates.

So, the official document says, “Estimates are therefore likely to undergo revisions …”.

Clearly, the figure of decline of 23.9% represents only the organised sector and even this will be revised downwards. Revision of quarterly estimates of growth has been routine in the last one year and this year will be no exception given the huge uncertainty in data. It also portends that the next quarter will also be dismal given the poor consumer sentiment, low business confidence and continued difficulties in the unorganised sector and the services sectors.

First, the lockdown was not properly implemented, so the benefit of lockdown could not be obtained. The lockdown is being eased while the number of cases are rising rapidly. The first round of attack is proliferating and the number of infections are increasing creating huge uncertainty. Repeated local lockdowns have had to be ordered, which disrupts production. Second, as mentioned above, there is a very large unorganised sector unlike other big economies. People in this sector are poor and cannot cope with a crisis. The authorities have ignored this factor.

Third, a large number of people are alienated from the system and lack faith in the authorities. So, they flout official pronouncements. Some people believe that this is a manufactured crisis and the authorities are fooling them. Often, one sees people going around without masks and not maintaining physical distancing. This enables the virus to proliferate. This is also the lesson from countries that have been successful in controlling the spread of the disease – the moment there is laxity, the disease starts proliferating again.

Thus, there are long-term factors which make India’s situation worse than that of other major economies. Even if one accepts the official data, the Indian economy is in depression and not just recession. It will take a long time to get out of it – till expectations change. For that, the government needs to change its stance from cautious to bold.