India Needs a Big-Bang Stimulus, Not Sermons on How There Is No Free Lunch

It is highly unlikely that India will see a V-shaped recovery in terms of economic growth in the second half of the fiscal year. 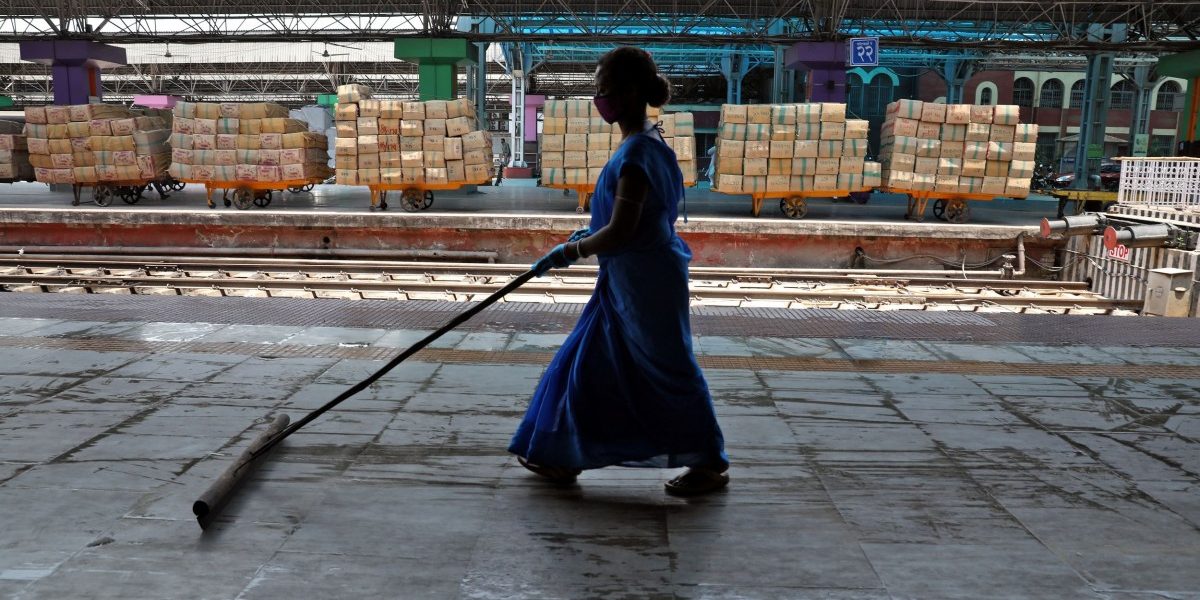 A worker cleans a platform at the Howrah Junction railway station after India announced a limited re-opening of its giant rail network beginning on Tuesday, after a nearly seven-week lockdown to slow the spreading of the coronavirus disease (COVID-19), on the outskirts of Kolkata India, May 11, 2020. Photo: Reuters/Rupak De Chowdhuri

Harried by frantic requests from state governments and India Inc, Prime Minister Narendra Modi has gone into his usual sphinx mode, and left it to chief economic adviser K.V. Subramanian to fashion a response to an increasing number of questions on a much-awaited stimulus package.

Then response Subramanian ended up giving in an interview to the Economic Times last week was as revealing as it was disturbing.

Subramaniam candidly admitted that the economy would need ‘some stimulus’ to help it come out of the lockdown smoothly, but he ruled out an open-ended fiscal stimulus of the kind the industrialised countries are giving, which is designed to maintain productive assets and shore up people’s purchasing power first and count the cost afterwards.

He has called this ‘monetising the deficit’ and pointed out that “one of the first things anybody learns in economics is that there is no free lunch… if you are going to monetise the deficit that will have some impact on macro fundamentals…. we cannot pretend to do policy as if there are no costs”.

How far the government was prepared to go was revealed on Friday when it announced that it would increase its total borrowing from the Reserve Bank of India during this year by Rs 4.2 lakh crore (Rs 4.2 trillion) to over Rs 12 lakh crore, and would do this by asking the RBI to sell additional bonds on the open market. This amounts to 2.1% of GDP. But the figure is deceptive, for the government owes various central and state entities around Rs 2 lakh crore in unpaid dues against which these entities have outstanding bank loans. After meeting those commitments, the net increase in expenditure will be just over 1% of GDP.

What is amazing is that with this paltry sum, Subramaniam expects not even a ‘U’ shaped (gradual) economic recovery but a ‘V’ shaped, sharp bounce-back. He supports his prediction by citing the ‘V’ shaped recovery of  the world economy after the Spanish flu of 1918-19, and concludes: “it is reasonable to say that we can expect the same”.

This appeal to reason is disingenuous because the COVID-19 and Spanish flu pandemics are as different as chalk and cheese. In 1918-19  there was no economic lockdown. Transport and financial links, which are the arteries and veins of a market economy, remained intact. The world economy suffered because unlike COVID-19, the Spanish flu attacked young people in the age group of 20 to 40. Both blue and white collar workers therefore took mass casual leave to save themselves.

The pandemic was short-lived though, because with no way to stop its spread, those who survived developed herd immunity by 1920-21. That cleared the way for investing the huge increases in wartime profits into new ventures. That was the cause of the ‘V’ shaped recovery that Subramaniam referred to.

There can be no similar bounce-back in India because although the virus itself is far milder than H1N1,  our lockdown has broken the chains of both supply and demand in the  economy simultaneously. It has done this, moreover, when the economy was already sinking even deeper into stagflation. For it, therefore, the lockdown was a knockout punch.

Just how severe can be judged from the following: In March the eight industries of the core sector recorded a fall in output of 6.5% when there was a lockdown for just the last ten days or so. The fall in April is likely to be around 20%.

The auto industry has sold no cars since the lockdown started. How much demand will revive under conditions of partial lockdown, when offices, malls, shopping centres and hotels remain shut, and employment and incomes are a fraction of what they were,  is anyone’s guess. But 20% might be an optimistic estimate.

Lack of demand is only half its problem. The other half is the disruption of its supply chains. Today this is total:  Maruti, for instance, makes components in Pune, Maharashtra, sub-assemblies in Hosur, Karnataka and assembles automobiles in Manesar, Haryana. Each of these centres in turn has other suppliers from the small and medium scale sector. Under partial, shifting lockdowns it will never know when the supply of a particular component will  be interrupted. Much larger inventories will need to be kept, This will increase the cost of production and impact exports in particular.

The hardest hit are the country’s 50 million MSMEs and their 110 million employees that produce materials and components for the  large units at the apex of the production chain and account for 40% to 45% of industrial output. Today most of these are at a standstill because orders have dried up, workers cannot get to work and trucks and vans carrying raw materials cannot enter their premises.

Not surprisingly therefore, CMIE’s weekly survey of employment shows that 114 million workers, almost half of the non-agricultural work force, were out of work in April, of whom 91 million are daily wage earners and 17 million are salary earners. At a conservative estimate, their lost income amounts to Rs 90,000 crore a month. That is the extent of decline in demand from this sector alone.

The death of 16 exhausted migrant workers who were mowed down by a train as they slept highlights, yet again, the human cost of the lockdown. But for every one of them there are a million others, still alive in the unorganised sector, whom the government’s hasty and poorly-thought-out lockdown has plunged into a nightmare world of uncertainty and desperation that they were trying to exit.

So if income, employment and production are not the “macro-fundamentals” that the government is fearful of disturbing, then what are? These are the balance between revenue and expenditure in the country’s internal account; and between foreign exchange inflows and outflows in its external account. Both balances need to be maintained to achieve the twin goals of stable prices and a stable exchange rate that the government has been convinced by current neoliberal dogma are necessary for sustained growth.

Maintaining the internal balance requires minimising the fiscal deficit. Maintaining the external balance requires limiting the import of goods and services to the value of its exports. But herein lies the rub: except for a short period in the 1970s and another in the 1990s and early 2000s, India has never been able to do the latter. So, maintaining the balance has depended upon attracting foreign capital. Since foreign direct investment has averaged $40 billion a year over the last decade and shows no signs of increasing, India has come to rely more and more on short term capital inflows to maintain the balance.

This is the point at which the internal and external ‘macro-balances’ meet. As the experience of Mexico, Turkey and Argentina in the 1990s and early ‘2000’s showed, a runaway imbalance in the  internal account is the surest way to forfeit the confidence of portfolio investors and cause a flight of capital. While India’s foreign exchange reserves are more than sufficient to meet its needs in normal times, they are insufficient to sustain more than a minor flight of short term capital. That is why everyone in the government, from Modi to Subramaniam, is dead set against ‘monetising the deficit’.

None of them seem to realise that the lockdown has  already destroyed these macroeconomic balances. While the government remains obsessed with keeping down expenditure to contain the fiscal deficit, the lockdown has drastically curtailed the government’s revenues. So, instead of decreasing, the fiscal deficit is set to increase to an extent that no one could have imagined only weeks ago.

The way to revive the economy and retain international confidence in the rupee is to prevent bankruptcy among producers and revive demand among consumers as rapidly as possible. The only way to do all three is to pump money into the economy in ways that do both. Today Indian industry is unanimous  on this  to an extent  I have not witnessed  in half a century of economic journalism. While the CII and ASSOCHAM have urged the government to pump in Rs 15 lakh crore (15 trillion), FICCI has proposed Rs 10 lakh crore and the Punjab, Haryana and Delhi Chambers Rs 16 lakh crore. (My own estimate, published in the Indian Express, is Rs 12 lakh crore, i.e 6% of the GDP.)

How does one make sure that the money goes to the intended beneficiaries? Apart from giving immediate relief to all unorganised sector workers through a cash transfer into the 319 million  Jan Dhan Yojana account that existed at last count – and providing more extended relief in the rural areas through MGNREGA – there is one other  way to do both at the same time in both industry and trade.

This is to meet the fixed costs being incurred by employers for the period in which their factories and workshops are idle on the condition that they continue paying 60% of the salaries of all those who were on their payroll on March 22, that the government will advance to the employers every month after they have furnished the details of their payrolls.

Compliance will be assured by the fact that all the employers stand to gain from the scheme. Cheating will be discouraged by the certainty that workers who have been left out will file complaints against their employers. The administration of the scheme can be left to the state governments. This is the method being employed by the British government. It is high time that New Delhi adopted it too.

Prem Shankar Jha is a senior journalist and the author of several books.