How the IMF Bungled the Greek Debt Crisis

Greece’s public debt, which was 120% of the GDP when the IMF undertook the “rescue”, has since risen to 170%. If the objective underlying the bailout was the restoration of the Greek economy to its health, it has been a clear disaster. 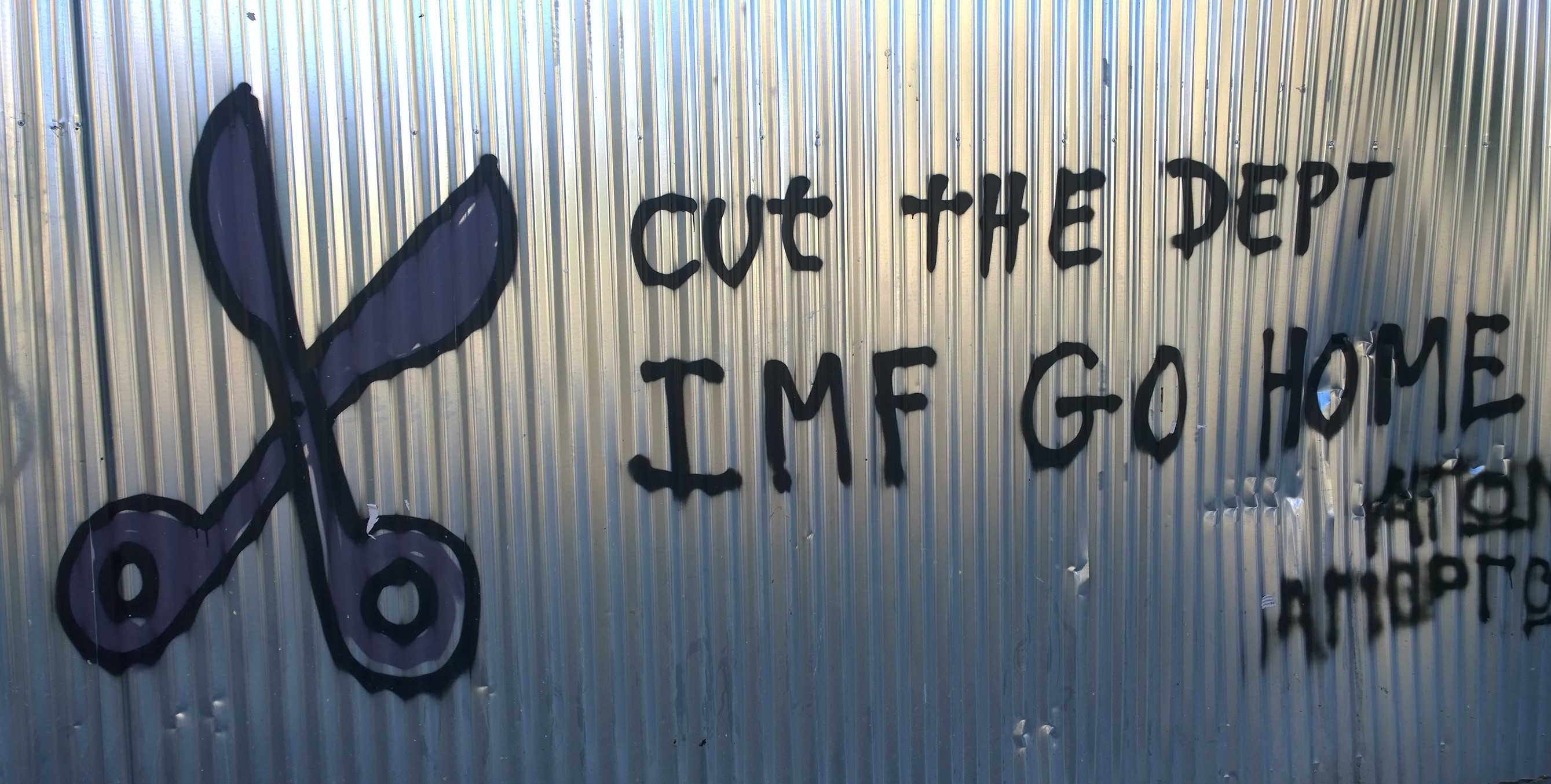 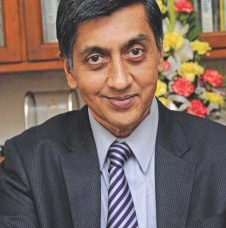 Greek riot policemen rest in front of graffiti written on the wall of a bank during violent demonstrations over austerity measures in Athens, May 5, 2010. Credit: Reuters/Yiorgos Karahalis

In 2010, what has since come to be known as the Eurozone crisis, erupted. It all started in Greece. Yields on the Greek government bonds rose sharply and it was clear that the European country would not be able to repay its creditors by raising funds from the market.

The IMF joined the European Union and the European Central Bank (the “troika”) in providing a rescue package to Greece, which consisted of €80 bn in bilateral loans provided by 15 euro area partners of Greece and €30 bn by way of a Stand-by Arrangement provided by Greece.

It turns out that the “rescue” that was done was not of Greece at all. It was a rescue of the private banks that had lent to Greece. The bank loans were duly repaid by the funding provided by the EU and the IMF.

In other words, the taxpayers’ money was used to bail out private banks – an all too familiar story of “socialisation of losses”.

And what about Greece, the country that was meant to be rescued? Well, some five years on, its GDP has shrunk by nearly a third, its unemployment is at around 24%, pensions have been cut and the public services have been devastated by the fiscal austerity package forced on to it by the troika.

Greece’s public debt, which was 120% of the GDP when the “rescue” was mounted, has since risen to 170%. If the objective underlying the bailout was the restoration of the Greek economy to its health, it has been a clear disaster.

Many objective commentators have come to recognise that the IMF bungled the handling of the Greek crisis and now we even have a confirmation from IMF’s own watchdog, the Independent Evaluation Office (IEO).

In a scathing report that was released last month, the IEO makes clear that the IMF made a series of lapses that ultimately contributed to Greece’s seemingly unending misery.

Common sense tells us what the proper response to a debt crisis should be to put the troubled economy on a path where it generates enough revenues to be able to repay its debt. Or, to use jargon, we must ensure ‘debt sustainability’.

Debt sustainability happens when both, the lenders and the borrower, make adjustments. Lenders agree to write-off some of the debt, and in return, the borrower – the country facing a debt crisis – takes steps to put his house in order by raising more revenues through the sale of assets, higher taxes or better tax compliance, and by cutting back on expenditure.

If lenders refuse to accept any loss on their loans, the entire burden of adjustment falls on the borrower. Since people cannot be asked to make sacrifices beyond a certain point, the required adjustment simply doesn’t happen. The result is that the country ends up more steeped in debt than it was when the rescue started off.

This is precisely what has happened with Greece. The IMF and its partners in the troika went ahead with their bailout with little regard for the issue of debt sustainability. The IEO report grimly notes:

Perhaps no other IMF decision connected with the euro area crisis has received more criticism than that of providing exceptional access financing to Greece when its sovereign debt was not deemed sustainable with a high probability. The decision not to seek pre-emptive debt restructuring left debt sustainability concerns unaddressed. It also magnified the required fiscal adjustment, and thereby, at least in part, contributed to a large contraction of output and a subsequent loss of public support for the program.

Why did the troika ignore the issue of debt restructuring that is so crucial to sustainability?

The IEO report says that they were concerned about the “contagion” effects, mainly that the private creditors in other countries would start dumping the debt they were holding. The crisis in Greece would thus spread and engulf other countries in the eurozone.

While this was a legitimate concern, the IEO is of the view that the IMF should have properly examined a range of options and prepared itself for the contagion effects under each option and then presented the scenarios to the board of directors. Instead, one option was simply rushed through.

Ignoring the issue of debt sustainability was a violation of the IMF’s policy of ‘exceptional access’, which requires it to satisfy the condition that the distressed country’s debt should be sustainable ‘with a high probability’.

The IMF staff went around that violation by building an exception to this condition in the situations where systemic risk was involved. What is worse is that this was done in a non-transparent manner and without adequate deliberation on the part of the IMF’s board of directors.

The fact that the policy was being modified was concealed in the request for the Stand-By Arrangement itself. In other words, a small group of technocrats decided the policy on Greece without a proper oversight by the IMF’s board.

The IEO points to several other failures over a long period. The IMF allowed itself to be carried away by optimism of the euro project:

Before the launch of the euro in January 1999, the IMF’s public statements tended to emphasise the advantages of the common currency more than the concerns about it that were being expressed in the broader literature. How a monetary union could be effective without a fiscal, banking or political union is an issue that was flagged in the literature. The IMF ought to have made a technical analysis of this crucial question. It failed to do so.

In the run-up to the financial crisis, the IMF’s surveillance failed to capture the build-up of risks in the Eurozone which was signalled by widening current account deficits of several countries. The IMF staff did not view matters with objectivity. The IEO makes some damning observations:

Lack of analytical depth, rigor, or specificity and the failure to highlight sufficiently the need for stronger remedial action in a currency union were among the factors that undermined the quality and effectiveness of surveillance. At the euro area level, IMF staff’s position was often too close to the official line of European officials, and the IMF lost effectiveness as an independent assessor.

The IEO report highlights “groupthink and intellectual capture”, a “culture of complacency”, “ad hoc task forces” and the non-availability of crucial documents.

There were other failures as well. The IMF’s working arrangements with its European partners were far from satisfactory. The growth projections for Greece and Portugal were overly optimistic, and the lessons from past crises were not applied.

Most importantly, there appears to be a complete lack of accountability within the IMF. The former finance minister of Greece, Yanis Varoufakis, who stood up to the troika and demanded the IMF functionaries who handled the crisis be dismissed, paid the price by being ousted by his own party, Syriza. Instead, the then head of the IMF’s mission in Greece has since been promoted to become the European chief.

The mishandling of the Greece crisis is among the many costly errors that the IMF has made over the years. In the East Asian crisis, it had imposed a similar fiscal austerity on Thailand and other countries, a policy that was seen as having prolonged the downturn in those countries.

The IMF promoted capital account liberalisation for many years before changing its views on it in 2012. In the run-up to the crisis of 2007, it saw securitisation as promoting financial stability; as a result, it completely failed to anticipate the build-up of risks in the financial system. In June of this year, its deputy managing director went so far as to admit that neo-liberalism had been oversold. Given the record of the IMF, it is legitimate to ask: how safe is it for borrower countries to rely on IMF’s advice?

Despite its record, the IMF has not proved amenable to the reform of its governance. The US and other western nations have disproportionate voting rights. The managing director’s post is reserved for Europeans (with the post of World Bank president being the preserve of the US).

It is unlikely that things will change dramatically in the near future. Perhaps, the best way for developing countries to take care of themselves is to be sceptical of the nostrums being peddled by the IMF.

T.T. Ram Mohan is a professor at IIM Ahmedabad.